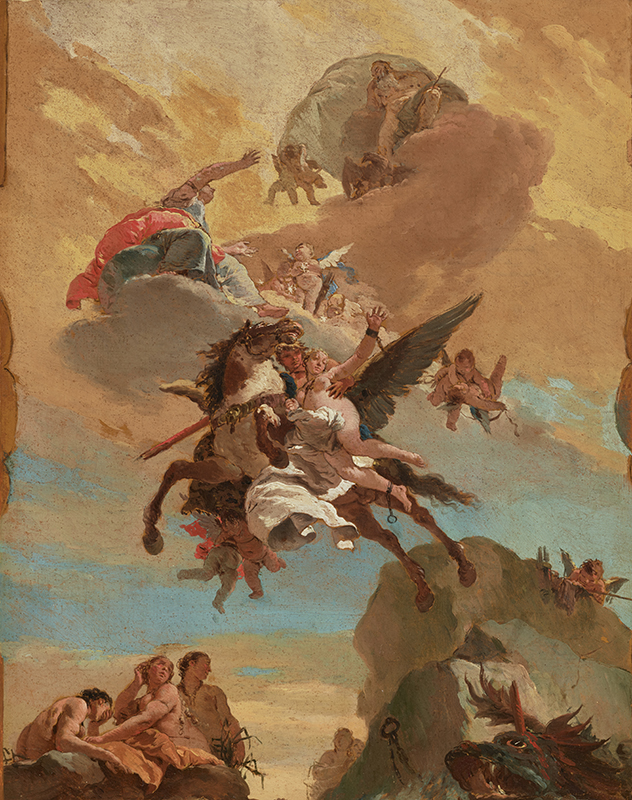 It sometimes happens that the premise of an exhibition is as inspired as the art it contains. Such is the case with Tiepolo in Milan: The Lost Frescoes of Palazzo Archinto at the Frick Collection. Inveterate visitors to the Frick will have noticed, in the hallway leading to the Bouchers and Fragonards, a bright little painting by the Venetian master Giovanni Battista Tiepolo, depicting the myth of Perseus and Andromeda (Fig. 1). Most visitors admire it and move on, little imagining that it carries a burden of history far more tragic than any work of such sparkling charm should ever have to sustain. The painting is a modello—a precise preparatory rendering of how a finished commission will look—for one of the five frescoes that Tiepolo created on the ceilings of the Palazzo Archinto in Milan: all of them were destroyed on the night of August 13, 1943, when Allied bombs leveled much of the central and oldest part of the city.

The great strength of the Frick exhibition consists in uniting its own painting, for the first time since it left Tiepolo’s studio, with the modelli for two of the other ceilings at the Palazzo Archinto, Apollo and Phaeton, from the Los Angeles County Museum, and The Triumph of the Arts and Sciences, from the Museu Nacional de Arte Antiga in Lisbon. All three paintings were made between 1730 and 1731, but the latter two, unlike the Frick’s, appear in the present exhibition together with a series of preparatory drawings. None of the three original frescoes survived the Allied bombardment, but from black and white photographs taken around 1920, we can see that they differed slightly, but only slightly, from the modelli on view at the Frick.

Tiepolo’s work at the Palazzo Archinto represents his first commission outside of Venice and its mainland territories, at the inception of a career that would eventually take him to the princely residences of Bavaria and the imperial palaces of Spain. In this project at the Palazzo Archinto, eight ceilings in all were painted, five by Tiepolo and three by the slightly older and more conservative Vittorio Maria Bigari. Both artists collaborated with Stefano Orlandi, a gifted quadraturista—a species of painter much in demand in seventeenth- and eighteenth-century Italy, who created the extravagant trompe l’oeil architectural forms that served as the frame and context for Tiepolo and Bigari’s buoyantly airborne figures. Beyond the three modelli in the present show, and the few preparatory drawings, nothing remains of the Palazzo Archinto frescoes beyond a fragment of Tiepolo’s Triumph of the Arts and Sciences in Milan’s Castello Sforzesco and Bigarri’s Truth Unveiled by Time, which survived the bombing intact and, having been transferred to canvas, is now in a private collection in Milan.

Tiepolo’s patron for this commission, Carlo Archinto, was renowned in his day for his culture and learning. In addition to being a member of Milan’s ruling Consiglio dei Decurioni, he was famous for his library and for an art collection that included works by Titian, Raphael, and Correggio. Archinto was also a friend of the eminent historian Ludovico Antonio Muratori, whose Rerum Italicarum Scriptores was illustrated by Tiepolo: eight of the drawings from that book are also on view in the Frick exhibition.

The one attribute that all three modelli share it is an essential quality of weightlessness, of being airborne. Framed by a zig-zagging trail of golden clouds, the Frick’s Perseus lifts a naked Andromeda on the back of his horse Pegasus, while the defeated dragon looks up at them in earthbound dejection, and Jupiter and Casseopeia float above them all on wisps of cloud. In the next image, Phaeton—surrounded by naked forms, the figures of the zodiac and half of a classical column, petitions his father Apollo for the use of his chariot, which is being harnessed in the lower left. Apollo, this time accompanied by Minerva, reappears in the Lisbon Triumph of the Arts and Sciences, presiding over a varied gang of allegorical forms assembled as always on golden clouds. Those earlier airborne figures that populated Western painting seem, to some degree, like figures of earth illogically hoisted overhead; but the players in Tiepolo’s celestial drama seem to be in their natural habitat. Born in a state of delirious suspension, they are rarefied spirits “:…so soft/ And uncompounded is their essence pure,/” as Milton wrote, “Not tried or manacled with joint or limb,/ Nor founded on the brittle strength of bones.”

Humans, unlike sky deities and the happy few who (ancient sources assure us) have been catasterized into constellations, do not inhabit the air through their own powers of levitation or ascent. There is only one exception to this, but an important one: the condition of dreams. The dream of flying is as universal as any dream we are apt to have, and most of us have experienced it at least once in our lives. On the ceilings of the Palazzo Archinto, as transmitted in the canvases now in the Frick, Tiepolo is not relating any private dream, but rather a series of myths and allegories that form the collective dream of an entire culture. Perseus and Andromeda, of course, like Apollo and Phaeton, come from Ancient Greece. But at a cultural level they were as powerfully alive for Tiepolo’s contemporaries as they had been twenty centuries before.

Surely Tiepolo was not the first painter to blow the roof off a palace or the central nave of a church: that very Venetian trope goes back to Paolo Veronese, Tiepolo’s great model from two centuries before, who bequeathed it to the Baroque masters Pietro da Cortona in the Palazzo Barberini and Baccicio in the Church of the Gesu in Rome. Each of these depictions engaged the same universal longing for emancipation from earth and all its burdens. But this dream of weightless freedom, so central to spirit of the Rococo, was never given more compelling expression than in the art of Tiepolo.

Tiepolo in Milan: The Lost Frescoes of Palazzo Archinto is on view at the Frick Collection in New York from April 16 to July 14