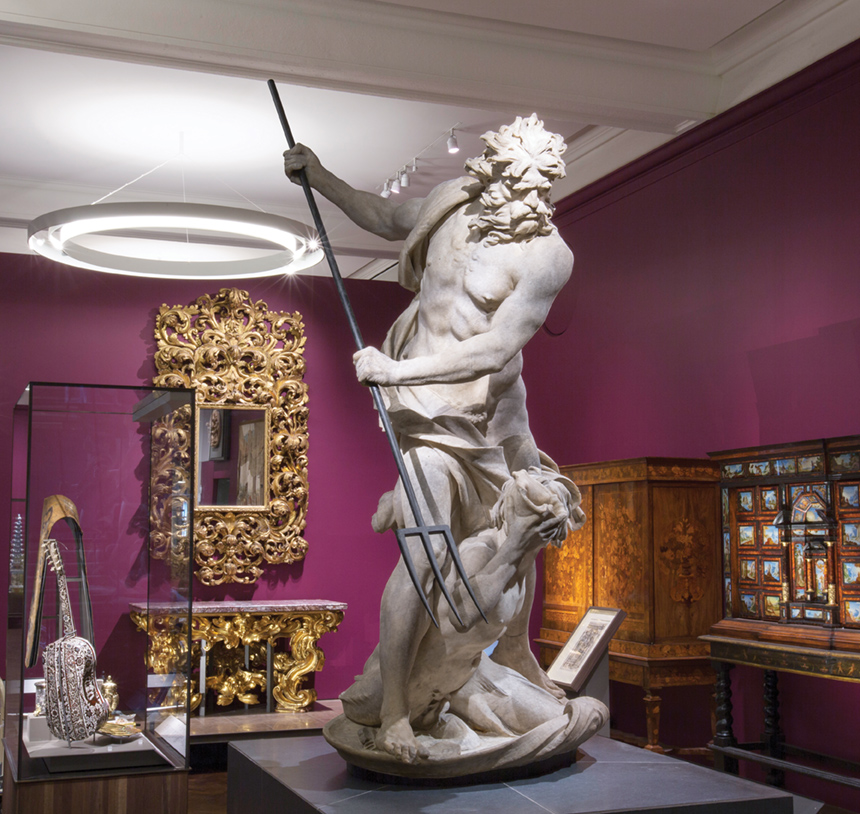 In December 2015 the Victoria and Albert Museum’s European galleries were opened to the public for the first time in nearly a decade. The prime space just off the museum’s grand entrance has been completely redesigned to uncover the original 1909 architecture of Aston Webb, and more than eleven hundred objects from the museum’s remarkable collections of art and design are now on display. Visitors descend stairs and immediately experience the power of the Italian baroque: Bernini’s monumental sculpture Neptune and Triton of about 1622–1623 dominates the first gallery.

The central rooms of the galleries known as Europe 1600–1815 introduce periods and styles in chronological order: the baroque with rich purple walls, pistachio green for the rococo, and gray for neoclassicism. Overarching narratives unfold throughout the galleries, principally that of the origins of a style or art of living that today seems recognizably modern: visitors’ attention is called in particular to the progressive democratization of luxury and the growing emphasis on comfort and intimacy.

The pivotal story of Europe between 1600 and 1815 is told in rooms painted blue, the predominant color of the Bourbon monarchy; it is the story of the gradual decline of Italian influence over the world of fashion and the concomitant rise of France to rule over high style and the production of luxury goods during a key moment in the history of the decorative arts. This is a narrative that the Victoria and Albert is particularly well equipped to tell, in part because of the numerous objects bequeathed to the museum in 1882 by London tailor John Jones, a collection that exemplifies nineteenth-century English collectors’ passion for eighteenth-century French art.

Three historic interiors have been re-created in side galleries: a richly paneled late seventeenthcentury French bedchamber from Normandy, a sparkling oval room confected in Italy in the late eighteenth century, and the thoroughly charming cabinet designed in 1778 for the Hôtel de Sérilly in the Marais neighborhood of Paris by the Rousseau brothers, who produced lavish paneling for Versailles and other royal palaces.

The galleries are often a royal affair. They feature a 1680s needlepoint hanging designed by Charles Le Brun that includes a delightful depiction of Louis XIV as Jupiter; a German miniature of Peter the Great of about 1720; a charming 1758 François Boucher portrait of the marquise de Pompadour; and an elegant daybed of about 1745 by JeanBaptiste Tilliard I, long believed to have been crafted for Pompadour, and now displayed against the backdrop of contemporary wall paneling ornamented with scenes from Aesop’s fables. (The daybed’s gilding and upholstery have been brilliantly revisited for this installation.)

Interactive activities of various kinds pop up  all along the journey from baroque to neoclassical. A film encourages less inhibited visitors to experience a Venetian masquerade by imitating the dance moves of a Harlequin figure. Others can listen to readings from Perrault’s Sleeping Beauty or Casanova’s memoirs, or hear curators discuss their favorite objects.

The treatment of historic costume is one of many innovative decisions. Fashion is presented on an equal footing with furniture, as a true decorative art. Visitors are introduced, for example, to the various ways in which men displayed their fashion sense during one of the most extravagant periods ever in the history of dress. Two banyans, or dressing gowns, are particularly sumptuous, and a heavily embroidered 1730s waistcoat is a stunner.

An installation of period  costumes and decorative objects in the Europe 1600– 1815 galleries. Photograph by David Grandorge.

The Europe defined by these galleries was expansive: a dazzling fireplace made of steel in Tula, south of Moscow, about 1770 is among the showstoppers. The Continent was also inclusive, functioning in a truly global economy and  interconnected with the world at large. Exhibits detail how artisans everywhere adopted materials and designs of the most varied origins. A striking weaving made by Peruvian craftsmen for Spanish colonizers about 1700, for example, features a composition in which a unicorn, two xiezhai— mythological Chinese beasts—and merpeople playing lutes coexist on a background of Chinese silk imported to Mexico via Manila and dyed with the crimson produced from the bodies of the cochineal, an insect native to the Americas.

What were the craftsmen who designed these objects thinking? And how did those for whom they were designed react to such juxtapositions? Visitors will surely come away with a new sense of “European” style.