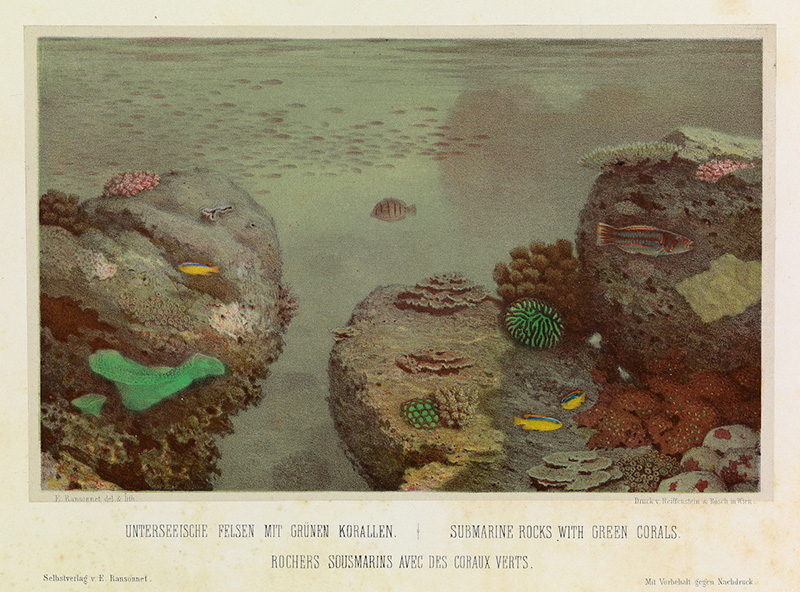 As we enter our second year of life in the pandemic, we’ve learned to spend our time in new and interesting ways. For example, finding buried treasure has presented us with an exciting way to relieve boredom, learn history, and potentially earn a fortune (if we’re able to locate the Golden Owl, or decode the Beale Ciphers). Any Goonies out there looking for a challenge? (Messy Nessy Chic)

Or, you could buy a metal detector, go for a walk, and perhaps discover a cache of Iron-Age Celtic coins like the British bird-watcher who literally stumbled upon a trove of what might be the most considerable contribution to numismatic academia in decades. (Smithsonian Magazine)

Get a load of the nineteenth-century underwater landscape paintings and lithographs made by Eugen von Ransonnet-Villez “en plein mer” from inside a diving bell he constructed to travel to the ocean floor. The images have great aesthetic value, but even greater scientific value because of the manner in which they were made. (Public Domain Review)

Another man who was interested in bringing the mysteries of the deep to the attention of landlubbers, Louis Boutan––a nineteenth-century French marine biologist and photographer––developed the means for making underwater photographs using a specially constructed camera and flash. Here’s the world’s first underwater selfie! (Vintage Everyday)

The architectural preservation community rallied to save one of the great examples of Louis Kahn’s work. The Indian Institute of Management in Ahmedabad was planning to raze a considerable portion of its campus, which the administration claims is unlivable due to structural issues. The World Monuments Fund and other organizations have come to the rescue offering alternative solutions. For now, the demolition plans have been halted, and a committee will work to develop a better proposal. (Hyperallergic/New York Times)

The legendary architect is also the subject of three new books dissecting the personal and professional life of the man who notoriously “conversed with bricks.” “Was Kahn a true sage . . . or just a bushwa artist conning the eggheads at Yale and Penn, where he taught?” asks reviewer Alex Beam. Writer John Lobell argues the former in his book Louis Kahn: Architecture as Philosophy. (Wall Street Journal)

Our friends at the Decorative Arts Trust are gearing up for Americana Week at the end of the month, with their contribution being a series of virtual tours of museums, auction houses, and galleries led by some of the best specialists in their scholarly categories. Register now and don’t miss this opportunity to learn more about some of the treasures on view and for sale this winter in New York City. (Decorative Arts Trust)

Critic Myron Magnet’s penetrating analysis of the marriage stories comprising George Eliot’s Middlemarch is an encomium on the author’s psychological insight and limitless compassion for her characters, particularly when it comes to so-called “personal” tragedies, in which “pathos . . . is below the level of tragedy except for the passionate egoism of the sufferer.” (New Criterion)

Songs for a slow city: Check out this playlist inspired by Andy Warhol’s 485-minute film Empire and by a year spent in locked-down New York City, which was created by MoMA’s film curator Sophie Cavoulacos. (MoMA)

The 1942 film To Be or Not to Be, directed by the elegant German-American doyen of Hollywood’s Golden Age Ernst Lubitsch, and starring Jack Benny in five contrasting roles (two-bit actor, jealous husband, a pair of Nazi colonels, and a Polish professor who’s actually a German spy), belongs in the pantheon that includes Chaplin’s The Great Dictator and Mel Brooks’s The  Producers—films that turned fascism into comic gold. (American Scholar)

An important work by Thomas Hart Benton is on view and apparently for sale in Kansas City at Kiechel Fine Art. Consigned to the gallery that formerly represented Benton, Butterfly Chaser was a gift to the artist’s daughter Jessie, who for her twelfth birthday asked for ten butterflies. Instead, he painted this oil for her, which has lived far longer than any winged insect. Though Jessie was disappointed as a child, the painting has brought her much joy throughout her life. Now it’s time for the picture to move on. (Journal Star)