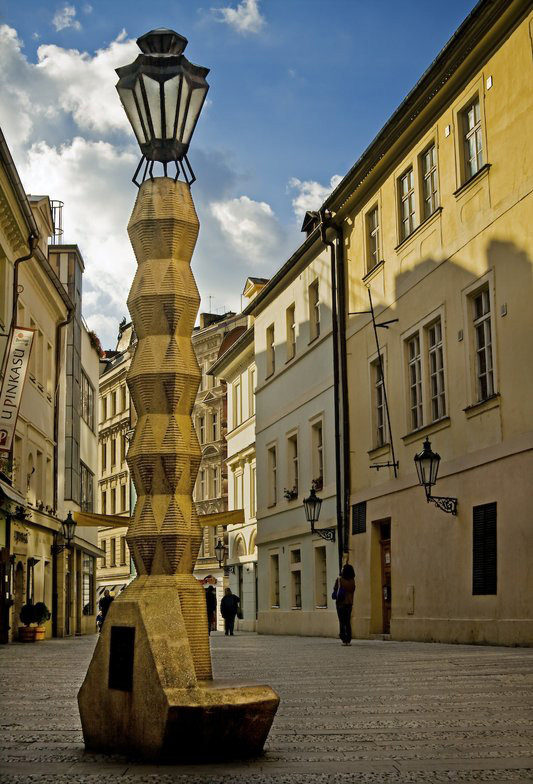 The zigzag angles, the break in the line of a chair leg, or the dark stained wood immediately attract your attention to Czech cubist furniture. Each wooden element is beveled into the planes of a prism, resulting in the unique designs produced during a few brief years before World War I in what is now the Czech Republic. On a recent trip to Prague, I encountered this distinctive style in an exhibition entitled Czech Cubism at the House of the Black Madonna, one of the city’s outstanding examples of cubist architecture (Fig. 1). The applied art exhibits were drawn mostly from the collection of the Museum of Decorative Arts in Prague, which is currently undergoing restoration.1 On entering the exhibition the visitor is introduced right away to the designs of Josef Gočár-one of the key figures in Czech cubism and the architect of the House of the Black Madonna-with an ensemble of furniture he created in 1913, at the peak of the movement (see Fig. 4). A divan dominates the grouping, upholstered in a flat floral pattern of light golden brown that contrasts with the dark ebonized oak. Form hardly follows function in the crest rail of zigzags resembling the rays of the sun. The upholstery lines answer in counterpoint, matched by the angled arms and feet. The radial arrangement is carried over into a writing desk, as are the angular lines and oddly bent legs, which look as though they might collapse under a heavy weight. The chandelier in the grouping appears celestial, with shiny brass angles and glittering glass beads (Fig. 3).

Fig. 3.  Four-branch chandelier designed by Gočár, executed by the Prague Art Workshops, 1913. Brass and glass; height 41¼, width 30¼ inches. The Prague Art Workshops was a cooperative of artists, designers, and craftsmen founded in 1912 by Gočár and Janák. Museum of Decorative Arts in Prague.

Fig. 1. House of the Black Madonna designed by Josef Gočár (1880 –1945), 1912. A former department store, the Prague building gets its name from the small statue of the Virgin and Child set into an exterior corner niche. In 2010 it was included in the List of National Cultural Monuments of the Czech Republic.

What brought about this outburst of cubist-inspired artistic activity in the former Bohemia and Moravia regions of the Habsburg Empire between 1909 and 1914? It arose from the mood for reform among designers all over Europe in the late nineteenth and early twentieth centuries, when industrial modes of production were challenging artisanship. Experimental ideas in the decorative arts were percolating in many countries, while reformers were also promoting the integration of the arts, where architect, artist, and craftsman would work cooperatively, as in Vienna’s Wiener Werkstätte or Munich’s Deutscher Werkbund. In Prague, the Artěl workshops were established in 1908 and similarly devoted to crafted arts from toys to furniture. Artěl members declared in their manifesto: “Our association emerged to stand against the factory-made stereotype and surrogate; we want to resurrect the feeling for plastic work and taste in daily life.”2

At the same time, progressive Czech designers and architects felt a need to get out from under Viennese dominance in art and design and looked to avant-garde art trends emanating from Western Europe, in particular, Paris, for inspiration. Foremost among the representatives of Czech cubism were sculptor Otto Gutfreund, who had studied in Paris in 1909 and 1910, and painter Emil Filla, who visited France often during travels in Europe between 1907 and 1914. Both influential members of Prague’s reform-minded Group of Fine Artists, established in 1911, Gutfreund and Filla were drawn to the radical cubist paintings of Picasso and Braque-and cubism’s celebration of the freedom of individual thought and imagination. Recently, art historians examining the development of non-representational art in the countries of the former Habsburg Empire have suggested that the appeal of cubism to Czech artists, for example, had its roots in the philosophy of art education in these regions, where teaching drawing based on mathematics was mandatory from elementary school onward. From an early age, Czech students trained rigorously in the study of geometric shapes, which were considered the basis of beautiful form. 3Rejecting the curvilinear, fluid lines of art nouveau, Prague architect Pavel Janák, a central figure in Czech cubist design (see Fig. 2), was inspired by the flat surfaces, sharp edges, and oblique lines in the structure of the inorganic crystal, which represented to him an expression of spirituality. Indeed, writes Lucie Vlčková, co-curator of the Museum of Decorative Arts’ Czech Cubism exhibition: “In Bohemia, the significance of the crystal and its forms became the central component of the Cubist morphological repertory, largely due to Janák’s theoretical writings devoted to these issues.”4 As Janák wrote in Styl magazine in 1908: “The spirit of the new style is already defined, and the road to its plastic means by penetration to the very nature of matter is clear: it includes geometric forms, prismatic and cubic, the most intrinsic essentials of all forms, purged of everything secondary; their natural constructive arrangements are the new compositional principles.”5 Janák’s ideas take form in a ceramic box of 1911 (Fig. 6), in which the cream-colored earthenware has been molded into triangular shapes like those of a crystal. Painted black lines define the edges of each oblique plane, obliterating the distinction between the container and its cover. Form overrides function in this sculptural piece.

Another key designer of Czech cubism, architect Vlastislav Hofman, was critical of the naturalism in the work of turn-of-the-century Vienna Secessionist artists, writing in 1913: “In contrast to the realistic liveliness of the vegetal form of the Secession, today’s look seems to be more compatible with a smooth, machined look and the purity of formal mood…a formal character which might be called the abstraction of appearance.”6

Fig. 8. Prague Art Workshops display at the Deutscher  Werkbund exhibition in Cologne, 1914. The furniture and chandelier were by Gočár; the wallpaper and carpet designs by František Kysela (1881–1941).

Fig. 13. Staircase in the House of the Black Madonna.

In their concentration on form over material, Czech cubist furniture designers opted for easily obtained natural woods, such as oak, not the expensive exotic wood veneers or gilt mounts and silk upholstery of French cabinetmaking. There is often also a roughness in the joinery, as in a dining room ensemble from 1911-1912, designed by Hofman. The chairs are simple in construction, their wide boards beveled into oblique, angular planes to give them volume (see Fig. 12). The legs taper down to a pointed foot, which is plain but robust-no French sabot here.

The form of the furniture counted more than fine cabinetmaking. The designers regarded each object, whether a piece of furniture, a ceramic, or a lamp, as an artistic statement, as a sculptural work of art.Prague’s Museum of Decorative Arts is fortunate to have an important grouping of furniture designed by Gočár for the Czech display at the 1914 international exhibition of design organized by the Deutscher Werkbund in Cologne (Fig. 8). The zigzag lines of the sofa and the daring double-angled backs of the chairs are especially expressionistic. A sideboard and glass cabinet with winged cornices, each one beveled into sculptural volumes, lined the walls of the Werkbund installation. In his review of the display, Czech art historian Václav Vilém Štech, although a friend of the cubist artists, called their work “theoretical furniture” with little regard for function, technology, or material.7 In that same year, 1914, when the English magazine The Studio published two interiors by Hofman, the writer commented on “the vertical and horizontal connection of inclined surfaces in unusual places. Experiments with cubes and prisms,” adding, “it is not easy to get used to . . . of furniture, only elite circles find it pleasing.”8 As was the case for reformers of design in many countries, the biggest struggle was persuading the public to open their purses for unfamiliar, challenging, crafted design that cost more than industrially mass-produced furnishings. Perhaps it is not surprising that Czech cubist designs most often found homes among friends, fellow artists, or sympathetic members of the wider cultural milieu.

As indicated earlier, many of the designers of Czech cubist applied art were architects, who also imparted a cubist character to their buildings, which can be found throughout Prague. Among the country’s foremost examples is Gočár’s House of the Black Madonna, the site of the Czech Cubism exhibition. Built in the city’s historic Old Town, the building originally housed a department store for textiles and fashion goods. The main entrance on the slightly angled front elevation is flanked by massive pilasters, their heavy capitals sporting cubist-inspired faceted triangles and prism forms. Inside, a stairway winds gracefully to the upper floors, its banister and newel post a network of angled metal bars (Fig. 13). Above the ground floor is the Grand Café Orient, with large windows overlooking the street. Recently restored with furniture and lighting after Gočár’s original designs, the café features dark, stained wood paneling and metal chandeliers and hanging lamps that are pure Czech cubist in design-though the furniture is Viennese in inspiration-a perfect turn-of-thecentury ambience in which to eat a cubist-inspired cake that is topped with tiny pyramids.

Fig. 10. Lamppost designed by Emil Králíček (1877–1930), Jungmann Square, Prague, 1912. This is actually a copy of the original lamp, the only one of its kind, which is now preserved in the municipal collection of the city of Prague.

Another key example of Czech cubist architecture is Josef Chochol’s apartment building of 1913 -1914 (Fig. 5). 9 Its cornice, balconies, and window heads molded into sculptural crystalline forms relate to the geometry of Chochol’s furniture.While strolling along the streets of downtown Prague in search of cubist architecture, I came across a cubist lamppost by Emil Králíček in a small square (see Fig. 10). When the architect was asked to renovate the darkly lit square, he decided to create this streetlight with its series of prismatic shapes incised with a linear pattern of triangular motifs and a multifaceted metal lantern. It is a work of sculpture that makes one wonder whether Constantin Brancusi might have seen it before creating his Endless Column in 1918.

The arrival of World War I interrupted the development of Czech cubist design. After the war and the founding of Czechoslovakia in 1918, designers became more concerned with the search for a national identity in their work. They looked back to folk motifs and the use of color and decoration in national craft traditions. However, echoes of cubist design reappeared in architecture and the decorative arts, but with softer more rounded geometric forms; sometimes referred to as “rondocubism,” it anticipated French art deco models.

Running a parallel course with the many other design experiments for the new century, the Czech cubists concentrated on form and personal expression in their desire to reach beyond materials, beyond the techniques of construction, and beyond decoration, in order to create a true work of art. This experiment, grounded in the artists’ Eastern European cultural heritage, led to a radical, if short-lived, uniquely Czech cubist character in design.