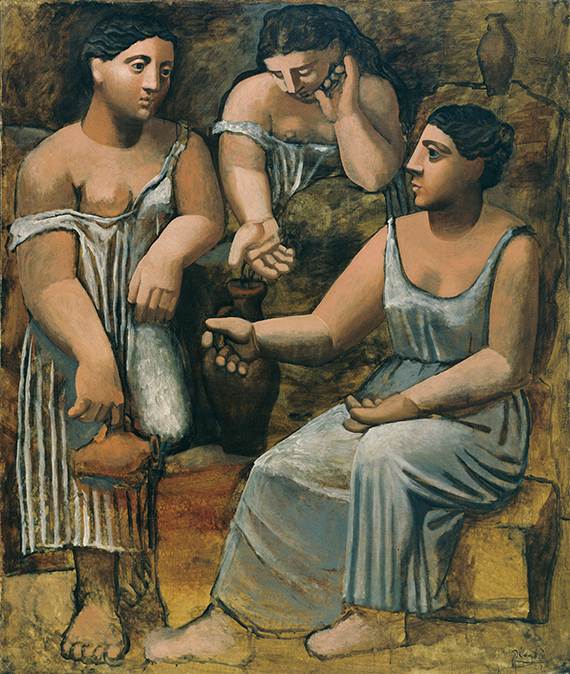 In the mature decades of their artistic careers, when Pablo Picasso and Diego Rivera sought to create the new they turned to the ancient. Picasso and Rivera: Conversations Across Time, the crowd-­pleasing exhibition currently on view at the Los Angeles County Museum of Art, explores the ways in which the two titans of twentieth-­century creativity set aside abstraction and ultimately found inspiration in the classical art and mythology of their homelands.

The show’s curators, Michael Govan and Diana Magaloni, guide viewers along the timelines of the two artists’ lives. Both received traditional training in painting and drawing, both thrived in the avant-­garde of Paris in the early 1900s, and both embraced the formal experiments of cubism. They met in 1914 and enjoyed a brief friendship that became a rivalry when Picasso stole some ideas from Rivera.

What came next forms the core of the exhibition: an examination of how each artist dealt with the aftermath of war—the bloody Mexican Revolution of 1910 to 1920 in Rivera’s case; the carnage of World War I in Picasso’s. Each, in a search for a sense of order and stability, drew on the art of the antiquity of his culture. Picasso looked to the sculpture of ancient Greece and Rome; Rivera to the art and iconography of the Aztecs and other pre-Columbian peoples. The rest is art history.

Picasso and Rivera: Conversations Across Time • Los Angeles County Museum of Art • to May 7 • lacma.org