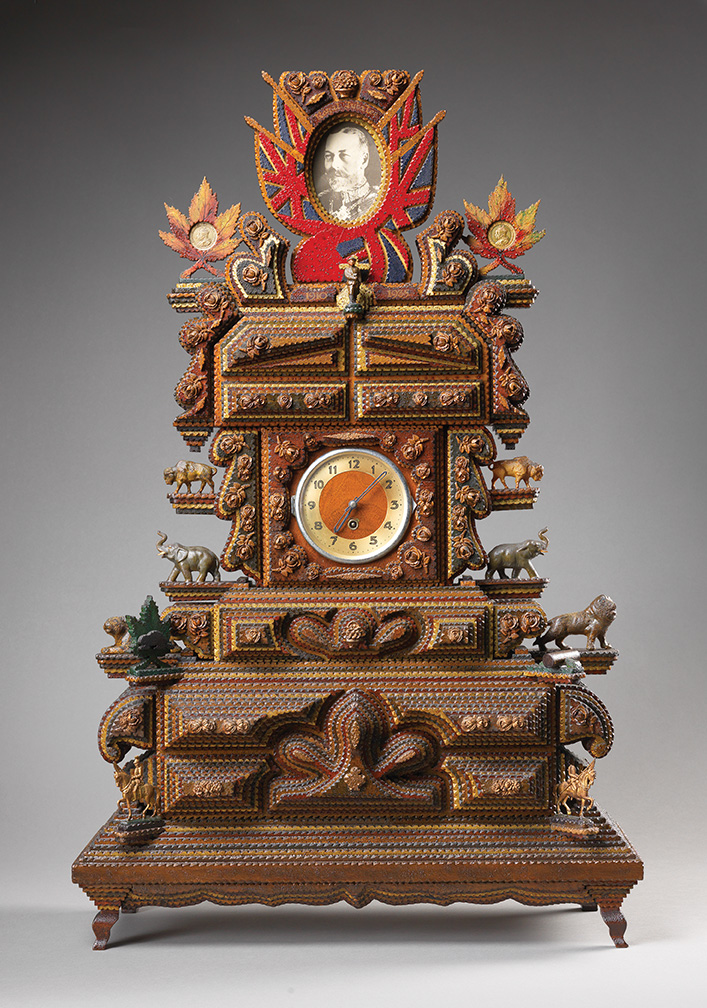 Conrad Neuwirth was good with a knife. Or so the German-born immigrant’s exquisitely carved wood boxes from the early 1900s tell us. He had enough pride in these boxes to sign, date, and number them before he gave them away to family and friends (see Fig. 6).1 Their notched and layered surfaces are characteristic of the style of woodcarving we know today as tramp art.

With their finely articulated surfaces and regular and rhythmic appearance, Neuwirth’s creations exemplify a woodcarving practice done primarily from the 1880s through the 1940s by working-class men in the United States and parts of Europe. Three of Neuwirth’s boxes are among the roughly 150 works included in No Idle Hands: The Myths & Meanings of Tramp Art, a forthcoming exhibition at the Museum of International Folk Art in Santa Fe, New Mexico. The show and the accompanying publication add the latest scholarship to the field, and showcase a selection of tramp art culled from more than twenty collections across the country.

As has often been noted, all that was required to make tramp art were the simplest of tools (a knife), the most basic of raw materials (the wood from a discarded cigar box or crate), and the most fundamental of techniques (V-notch carving). After the boxes or crates were disassembled, the thin pieces of wood were notched along the edges, creating a sawtoothed pattern like that made by pinking shears. These individual wood pieces were then layered on top of one another in incrementally diminishing sizes, often resulting in a pyramidal effect. The components were assembled and affixed with adhesive or small nails to the flat wood substructure of a frame, box, or any number of household objects. Part of tramp art’s appeal lies in the great variety of forms that have resulted from these basic “ingredients” and the tremendous creativity demonstrated by their makers, who married resourcefulness with visual complexity and harmony to produce objects brimming with personality.

Tramp art has a dedicated following among collectors and enthusiasts of various genres: folk art, self-taught art, antiques, Americana, woodworking.2 Central to an understanding—or better, a misunderstanding—of tramp art is the common notion that it was an exclusively itinerant art form, done by hoboes riding the rails in search of work, a square meal, and a place to rest for the night. While that is an appealing, and even a romantic image, one rooted in a peculiarly American experience of westward migration made possible by the railroad, it has been widely demonstrated to be an erroneous one. Adolph Vandertie, a Wisconsin man and a prodigious whittler who lived as a hobo in his youth, set the record straight with respect to who made tramp art when he told historian Helaine Fendelman in 1995: “Tramps and hoboes really should be known for whittling whimsies [intricate, but non-functional carved items]—a very popular pastime for them—not for making tramp art.”3 In other words, while there exists some gray area, tramp art by and large was not an itinerant tradition. Indeed, most tramp art comprises functional household objects, some of fairly large scale, including furniture, suggesting that it was the province of a settled existence.

Who, then, did make tramp art? And what can Conrad Neuwirth—his boxes and his biography—teach us about this art form? Many examples of tramp art can be found in Germany and throughout Europe, particularly in Eastern and Northern Europe, and conventional wisdom holds that the style and techniques migrated to the United States along with immigrants, particularly those of Germanic roots. The exact origin of tramp art is not definitively known, but Neuwirth’s story is very much in keeping with the aforementioned theory. Born in Württemberg, Germany, in 1843, he immigrated to the United States in 1866, in his early twenties, traveling on the ship Germania from Hamburg to New York. He settled in Rochester, where he and his wife, Catherine, eventually had eight children. He worked primarily as a mason, though the 1880 census shows that he also did a stint in a liquor store. He died in 1930 at the age of eighty-six.4

Carving was something he did in his later years to occupy idle hands. Most of the boxes I have learned about (to date, 101 is the highest number) were found in the Northeast and date from the 1910s. The majority are elevated on short but elegant legs, giving them lift and character. Vertical segments wrap the box exteriors, with some ending in a curve or a point. The hinged lift-top lids typically have complex arrangements of notches that might form a star, a cross, or diagonals. In at least a couple of examples, a protruding half-round allows for easy opening, which in at least one case reveals a sunshine-yellow silk lining (Fig. 6). The residue of adhesive on other box interiors hints at the fabric linings they almost certainly once had. Neuwirth’s notches are particularly fine, suggesting that he used a smaller penknife than some artisans.

A general picture of the “typical” tramp artist emerges from what is known about those who have been identified. All were men. They tended to be of the working class; the identified artisans in No Idle Hands had occupations such as mill worker, chauffeur, fireman, lightship captain, or carpenter. Some were immigrants—from Sweden, Slovakia, or Germany, for example. Others were American-born and the locales where much tramp art is found—such as Pennsylvania, New York, Ohio, Wisconsin, Illinois—point to their origins in regions settled by German Americans. Over time, and as the identities of more and more tramp artists come to light, this profile may change, but for now tramp art skews as a Euro-American, working-class men’s art form done in the service of domestic life.

Tramp art is the product of an era that valued industriousness and scorned idleness—objects that signified the value still placed on handwork in an age of industrialization. It also reveals itself, at times, as an art of redemption. In a 1959 article in Pennsylvania Folklife, “Tramp Work: Penknife Plus Cigar Boxes,” Frances Lichten describes her first prized tramp art piece, a wall-hung dressing cabinet (Fig. 9) found in a storage room at a friend’s “Pennsylvania Dutch” farmhouse, awaiting disposal as fire kindling. She was told that a man, now known to be John Zadzora, purportedly created the cabinet while in prison at the Lehigh County jail for failure to support his wife. “This story made it clear where the carver found the time to lavish so much labor on the piece,” Lichten wrote, “and may even explain some of the sentimental aspects [the applied hearts and wings], since he had ample time for repentance and reflection.”5 It turns out, according to a great-granddaughter of Zadzora, that he was in prison before he was married, so the narrative Lichten reported is another romantic fiction in the tramp art canon.6 An unusual frame made of notched and layered cardboard rather than wood was in fact created by an incarcerated man, Ridgely Sparks, from Frederick, Maryland, while he was imprisoned in the Baltimore state penitentiary in 1922. On the back of the frame, he inscribed, “Mad [sic] in the pen by Ridgely Sparks in 1922,” a notation that demonstrates that the inmate felt his circumstances when he made his tramp piece, and thus merited documentation.

The notches and layers that characterize tramp art lend themselves to an endless variety of forms, all of which evidence the resourcefulness and creativity of the makers. Boxes (see Fig. 5) and frames (see Fig. 4) comprise the majority of tramp art, but we also see numerous clock cases, personal devotional objects such as crosses and shrines (see Fig. 8), miniature dressers (see Fig. 3), lamps, and other pieces of furniture, and the once-common wall pocket (Fig. 10). No Idle Hands also features more unusual, even eccentric, examples, such as a birdcage, satchels (Fig. 1), a thermometer, a crib, and a “whimsy bottle” (Fig. 11) containing a double-sided tramp art frame holding portraits of President and Mrs. Calvin Coolidge. A desk with lamps that plug directly into the desktop elicits chuckles for its clever and entirely practical design (Fig. 7).

An elaborate clock (Fig. 2) from Canada that pays tribute to the reign of George V features various flora and fauna found in the territories of the British Empire, reminding us that the era of tramp art coincided with the age of imperialism.

An early twentieth-century tour-de-force by Henry Patrick Nugent speaks to the virtuosity of tramp art (Fig. 12): it seems to be a piece of furniture, yet has no evident function, for its tabletop is obstructed by a box. There are three boxes in all, one accessed by a “secret” swiveling stem, yet why would three smallish boxes require a structure that rises some four feet high? Uncanny in its presence, the piece inspires only wonder for the intensity of the labor Nugent invested in it, the quantity and perfect regularity of the notches, the variety of carved patterns, the overall harmonious symmetry, and the object’s unexpected architecture. In this case, the picture must convey what words alone cannot.

No Idle Hands: The Myths & Meanings of Tramp Art opens at the Museum of International Folk Art in Santa Fe, New Mexico, on March 12, and will remain on view until September 16, 2018.

Some passages of this article are excerpted from No Idle Hands: The Myths & Meanings of Tramp Art, ed. Laura Addison (Museum of New Mexico Press, 2017).

LAURA M. ADDISON is the curator of North American and European folk art at the Museum of International Folk Art. She organized the exhibition No Idle Hands: The Myths & Meanings of Tramp Art, and edited and coauthored, with Leslie Umberger and Eric M. Zafran, the accompanying publication from the Museum of New Mexico Press.