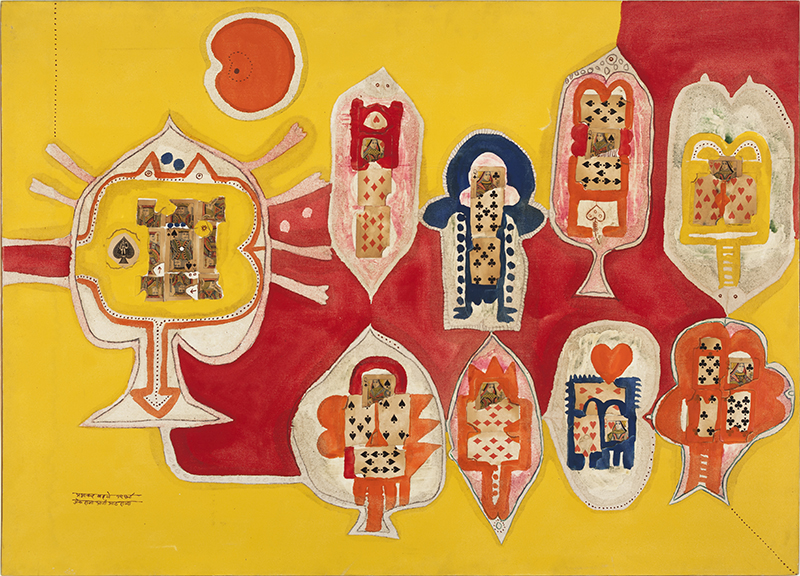 Abby Weed Grey was multicultural before multiculturalism was a thing. An intrepid world traveler and passionate art collector, Abby Weed Grey (1902–1983) took an interest in the modern art of the Middle East and India in the 1960s and ‘70s, a time when few Americans were attuned to contemporary cultural currents in those places.

Grey—who gave her art collection to New York University in 1974 and endowed the gallery at the school that bears her name—began a program of self-education and travel a few years after the death of her husband, a career Army officer and a canny investor.  She came to believe in the concept of “one world through art”—the notion that art could kindle a dialogue between people of different cultures. As she traveled, “I didn’t know where to look or exactly what to look for, but whatever it was going to be, it had to express the response of a contemporary sensibility to contemporary circumstances,” Grey once explained. “In every country, I asked ‘Where are your working artists? What are they doing? How are they breaking with the past to cope with the present?’”

More than one hundred works of art from her collection are on view in Modernisms: Iranian, Turkish, and Indian Highlights from NYU’s Abby Weed Grey Collection, an exhibition at the Grey Gallery open through December 7.  These include paintings, sculpture, and collages such as King and Queen of Spades by the Indian artist Prabhakar Barwe. Influenced by Tantric art—which employs abstract representations of deities that coincidentally resemble the runic symbols in the art of Paul Klée—Barwe here combines painted images with the court cards from a European playing deck. The collage can be read as a meditation on religion and the legacy of colonialism.

Other artists whose work is in the exhibition draw on design influences in the cultural history of their nations. Faramaz Pilaram is one of the Iranian artists in the show who was a member of the Saqqakhaneh school—a group of artists who sought to reinterpret that country’s architectural forms, calligraphy, and traditional ornamentation in a modern idiom.  The painter and mosaicist Bedri Rahmi Eyüboğlu found inspiration in Turkish folklore and folk art. His painting Full Moon can be seen as a kind of pastoral abstraction.

The exhibition will travel to the Block Art Museum at Northwestern University in Evanaston, IL, where it will be on view from January 21 to April 5, 2020, and then goes to the New York University Abu Dhabi Art Gallery in the fall of 2020.