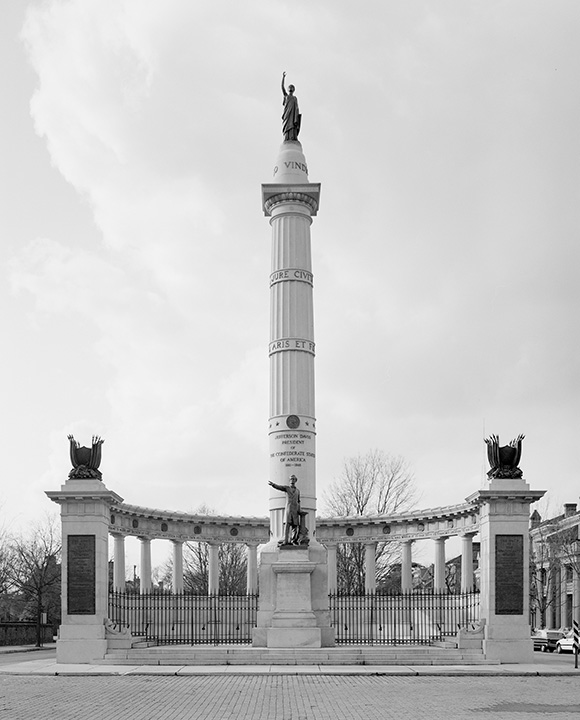 There’s trouble on Monument Avenue. This grand boulevard in Richmond, Virginia, is the symbolic heart of the city. It is leafy and quiet, and lined with grand architecture dating largely from the early twentieth century. As its name suggests, it also features a series of monuments. One is dedicated to the tennis player Arthur Ashe. All the others pay tribute to the leaders of the Confederacy—and that, of course, is where the problem comes in.

Confederate symbols, particularly the “Stars and Bars” battle flag, have become extremely controversial. The  flash point was the tragic shooting in Charleston, South Carolina, in which nine African Americans were killed by a white supremacist. Across the South, activists demanded that Confederate imagery be removed from government flagpoles and from license plates. Many governors (including Terry McAuliffe of Virginia) concurred. For most Americans this seemed the right decision, and a long overdue one. Given that the Confederacy fought to maintain slavery, the ongoing use of the battle  flag as a civic symbol was inappropriate, and it needed to stop.

Monuments present a more difficult case. Many feel that statues like those in Richmond, which memorialize the generals Robert E. Lee, Thomas Jonathan “Stonewall” Jackson, and J. E. B. Stuart, as well as the Confederate president Jefferson Davis and naval officer Matthew Fontaine Maury, are offensive and should be destroyed, or at least removed to a museum. “The  flag is hurtful, but not the general and president who led the cause it represents? That logic doesn’t hold,” Michael Paul Williams wrote last year in the Richmond Times-Dispatch. “The veneration of Confederates…shows that our city, state and even our nation have not been moved to remorse, much less contrition.”1 A moveon.org petition to remove the monuments has been circulating. Someone spray-painted “BLACK LIVES MATTER” across Jeff  Davis’s colonnade.

Richmond’s mayor has opposed the idea of removing the monuments, and for the moment the matter seems to rest in a stalemate. Certainly the dispute has not gone as far as it has elsewhere in the South—in New Orleans, for example, where the City Council ordered the removal of three Confederate statues and opponents retaliated with threats of physical violence against any contractor who would dare to take on the job. As with many contemporary political debates, this one would benefit from a little nuance. Those who have lined up on both sides of this argument—the removers and the preservers—should certainly not resort to graffiti or intimidation. They should also remember that each monument deserves to be taken on its own terms.

Take, for example, the stained glass at St. James’s Episcopal Church, which opened its doors to Richmond congregants in 1839. A local chapter of the United Daughters of the Confederacy commissioned windows depicting, respectively, J.E.B. Stuart in 1951, and the pioneering nurse Captain Sally Tompkins ten years later. She was designated as a military officer in support of her efforts caring for Southern soldiers (and was the only woman so commissioned in the whole of the South). The window shows Tompkins as a determined and saintly gure, with an angel watching over her. The names of key Civil War battles are inscribed in zigzag ribbons on either side. Tompkins’s improvised hospital can be seen in the upper section, with the controversial flag hanging above its front door.

The window was designed by Katharine Lamb Tait,one of America’s leading modern stained-glass artists, who was commissioned to design it in 1961, the centennial of the start of the Civil War. The result was an unusually late addition to the repository of Confederate-themed stained glass across the South. Most had been installed around the turn of the twentieth century, the peak era for the construction of monuments to the Southern cause (a particularly notable grouping is at Blandford Church in nearby Petersburg, completed between 1904 and 1912 by Tiffany and Company).

Thus far, at least to my knowledge, activists have not focused attention on the Confederate memorial windows in Richmond, much less called for their removal. Perhaps this is because they are in a church, rather than outdoor public spaces. The medium may also play a role; decorative and spiritual stained glass registers differently from triumphal stone memorials. In early June, however, the National Cathedral in Washington, D. C., announced that it is removing the small panes that depict Confederate flags in windows memorializing Generals Lee and Jackson, and replacing them with clear glass. A representative of the church said that having considered the potentially offensive nature of the  flags,“instead of turning away from that question, the cathedral has decided to lean into it.”3 The context of a church may be different from that of a city street, but a Confederate flag means the same thing wherever you see it. Captain Sally Tompkins was a non-combatant, but she was still on the wrong side, providing aid and comfort to the Confederate army. You can well imagine that a black parishioner (indeed, anyone sensible to the horrors of slavery, which should mean everyone) might feel unwelcome in a place of worship that pays her tribute.

The Tompkins window, then, is a useful test case. It is an important document of women’s history, as well as political history, and the removers would have a hard time persuading the church to destroy it. But equally, it should not just sit there without comment. The preservers should reflect that “history” is not a neutral and static terrain, but an active field that always involves interpretation. Andrew H. Talkov, vice president for programs at the Virginia Historical Society in Richmond,is one expert who advocates this approach. “I’m a proponent of adding to the historical landscape, not taking away from it,” he says.“Every Confederate memorial was put up in a very specific atmosphere that should be remembered.” He argues that the public should be made aware of the artists, patrons, and politicians who erected these monuments, and their motivations for doing so—that the history of memorialization is itself worth preserving.

This returns us to Monument Avenue. Both sides of the debate can at least agree that the statues of Jefferson Davis and his generals are reminders of a difficult past. The question should not really be whether to keep them where they are, but how they can best be used to speak to the present day. Maybe they could do more good elsewhere, but it is incumbent on those who would remove them to explain how. It’s easy to say “put them in a museum,” but what museum? Where? Who would be in charge of this process of re-contextualization, and who would cover the considerable costs involved?

Conversely, if the monuments do stay where they are, it should be impossible to so much as drive past them without being reminded of their full implications. As another historian, Atlanta History Center president and CEO Sheffield Hale, puts it, “it’s much better to keep these monuments. But, if we keep them, we cannot maintain the status quo. We must transform them from objects of veneration into historical artifacts that can tell the story of why so many of them were erected: as a vehicle to celebrate the Confederacy during Jim Crow segregation.”4

Either way, stay or move, these monuments are important precisely because they are uncomfortable. It is imperative that historians, curators, and scholars be engaged with their ongoing interpretation. History is complex terrain that requires thoughtful navigation. Let’s look at the Confederate monuments not just as a cause of further conflict, but as an opportunity for the problematic past to inform a less problematic future.