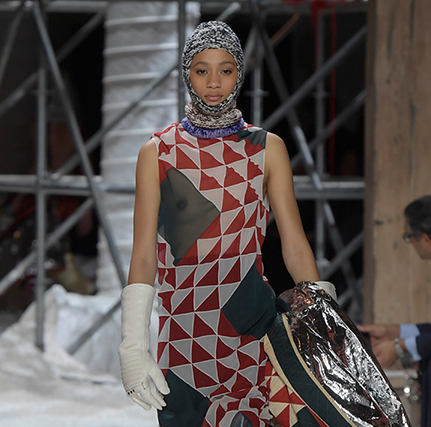 Imagine this: you’ve gotten hold of an antique quilt, perhaps 150 years old. It’s in pristine condition. It has an attractive pattern—a classic wedding ring, say, or log cabin, or even a crazy quilt. It is probably not the sort of object a museum would want, but it preserves a rich history all the same, of its maker, the family that retained it, and the craft itself.

Then you take a pair of scissors, and cut it to bits. 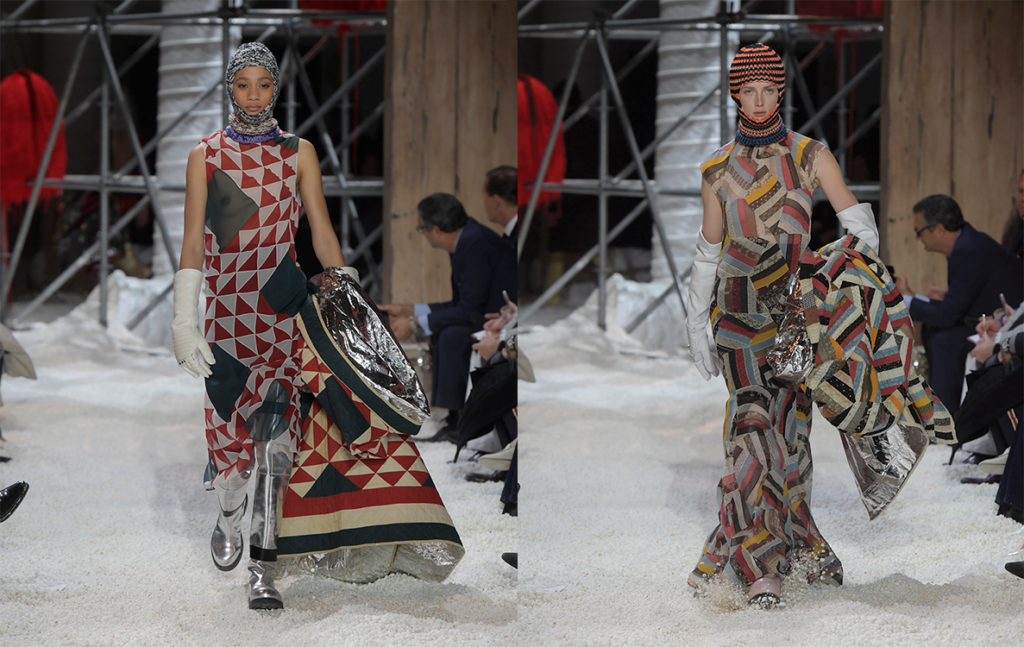 This is what has been happening lately, in both the fashion and art worlds. Fashion designer Raf Simons has made a big splash with his clothing from repurposed quilts, and the work has gotten a warm reception—he was even honored by the American Folk Art Museum at its gala this autumn. Nor is this a new phenomenon. Some years back, Ralph Lauren used antique quilts for skirt fabric and the linings of jackets. Norma Kamali created an entire whitework suit.

More provocatively, the artist Sanford Biggers has recently employed antique quilts in works that probe the history of African-American culture. “I consider myself a late collaborator,” he says.1 Originally, his interest was fired by the compelling story (unfounded, alas) that quilts were used as coded signals on the Underground Railroad. Now, he simply uses them for their rich symbolic value. Though Biggers does not necessarily use works made by African Americans, he knows that the medium has become strongly associated with black culture, particularly following the extraordinary success of exhibitions on the quilters of Gee’s Bend, Alabama.

How should we feel about this trend? I realized I wasn’t quite sure. So I spoke to two people who had expertise in the matter: the antique dealers Laura Fisher, of Fisher Heritage, and Stella Rubin. Both have been involved in selling quilts to Biggers, and to fashion designers like Simons. (Fisher also had the strange experience of selling a striking red-and-white quilt that was used in a celebrated ad campaign for Calvin Klein, with five members of the Kardashian clan posing with it in various states of undress; in this case, no quilt was harmed in the making of the images.) As specialists in the field, both confessed to a certain degree of horror at seeing historical artifacts cut-and-pasted. Yet they could also see an upside.

First and most obviously, if you are trying to sell quilts, or otherwise get the public interested in them, it is quite helpful to have them positioned prominently. Simons, in particular, has tried to promote interest in the history of the craft, while Biggers sees his work as an attempt to combat the “historical amnesia” that afflicts so much of American culture, particularly when it comes to black history.2

Such high-profile works do seem to have an impact on the marketplace, and this is important, partly because the availability of quilts to be repurposed is a function of their relative cheapness. A steady decline in collector interest, and therefore prices, began in the early 1990s—after a pictorial album quilt by Lucinda Ward Honstain, with a theme of post–Civil War reconciliation, set a record at auction that still stands. Works of that caliber have more or less retained their high value, but more typical survivals (which is to say, almost all of them) have fallen precipitously— arguably mirroring the disparity in wealth in the country as a whole. The good news is that, in sheer market terms, there has been a strong upturn lately. Whether it’s due to increased attention from fashion designers or not, Rubin reports that she has had her best year in a long time. 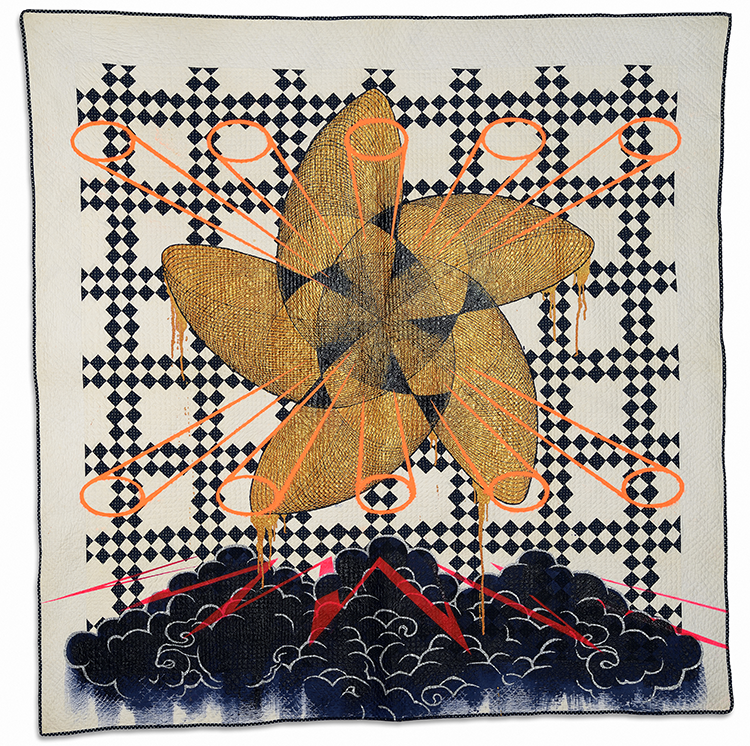 Fisher also points out that there is a specific appropriateness in reusing quilts—as opposed to furniture or ceramics—because so many historical examples were already made from scraps (though this too can be exaggerated, as many quilts were made from store-bought fabric). Perhaps we should view these instances of reuse simply as the next stage in an ongoing cycle, she says, “They were cut once, and made into a quilt, and now they’re being made into something else.” Buyer beware, though: Fisher also points out that nineteenth-century quilt fabrics will not stand much wear before they simply disintegrate.

On the art side, one might also argue that Biggers is elevating a decorative medium into something higher, or at the very least, reaching a different audience. Certainly, one of his collage-paintings will sell for a good deal more than the quilt it was made from. He may be destroying the artifact, but he’s creating value. In this respect, he is following in the wake of other artists who have used historic material, like Ai Weiwei, who has smashed, painted over, and otherwise manipulated ancient Chinese ceramics; the Chapman Brothers, who satirically defaced original Goya prints; or for that matter, Robert Rauschenberg, who bought a drawing from Willem de Kooning in 1953 and then erased it, a gesture equal parts Oedipal and conceptual. In each of these cases there was a bit of an outcry, but the works quickly came to be accepted as legitimate artworks in their own right.

The problem, of course, is that such activity is not regulated—and it’s difficult to see how it could be. What if some bold, independently wealthy artist bought a John Singleton Copley portrait and daubed all over it? That would be legal, strictly speaking, but surely not okay. Who draws the line? Both Fisher and Rubin have given ample thought to this. Though they are dealers, rather than conservators or museum curators, they feel responsible for the fate of objects that pass through their hands. There are certain things that they can do: suggest people not reuse quilts that are rare, artistically distinctive, and in good condition, instead directing attention to examples that are commonplace or already damaged. Fisher also tries to lobby auction houses and others to show images of quilts in their entirety, rather than only a detail, which tends to encourage people to view them as motifs rather than integral artifacts.

One thing is for sure: what seems expendable today may well seem precious tomorrow. In a recent article for Collectors Weekly, design historian Lisa Hix explores the rise and fall of what she calls the “grandma couch” of the 1970s. You know the one: upholstered in a scratchy synthetic scenic print dominated by brown tones. In its time, as Hix points out, this was a more popular type of furniture than mid-century modern ever was; and it was part of a coherent style, “perfectly set among the wood-paneling on the wall, the dense, rust orange carpet on the oor, the cuckoo clock, the dark-wood furniture, and the heavy, wood-frame TV set that never knew cable.”3 Today, this style is all the way out. But maybe, come 2026—the 250th anniversary of American independence—it will come back in, along with other derivatives of the colonial revival.

If so, the same might happen for antique quilts. Perhaps even more of them will be cut up, or maybe they’ll get sufficiently valuable that they’ll be safe. Who knows? Maybe “brown furniture” will rebound too, and find new audiences, even if we have to endure a trend for sculptures made out of cabriole legs first. It is a shame that for the cultural cycle to churn, it has to gnash genuine artifacts in its gears. But for now, anyway, that seems to be the price of doing business.