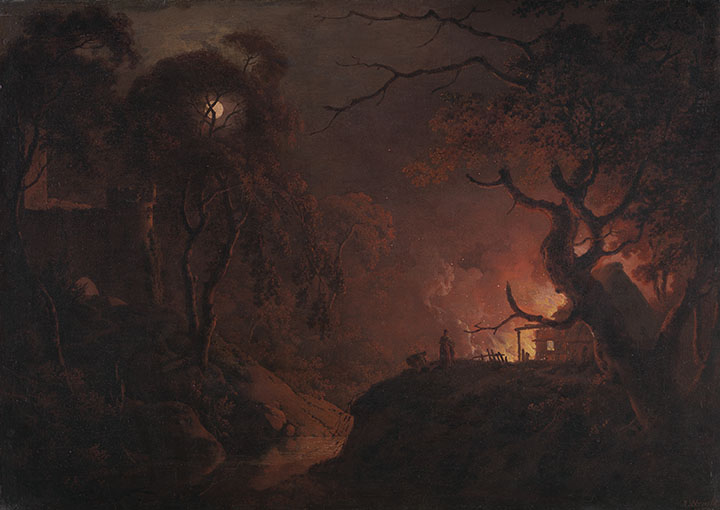 The sight of a crumbling castle squatting darkly against the horizon as the morning sun peeks through vapors swirling around its shattered walls and towers might be the very definition of “picturesque.” Paul Mellon would likely have agreed, and a student-curated exhibition this spring at the Yale Center for British Art, which the eminent art patron founded, will feature primarily paintings of castles from his collection.

“The castle is such an interesting way to capture the story of British history,” says David Frazier Lewis, a post- doctoral research associate who oversaw the organization of the exhibition, Art in Focus: The British Castle—A Symbol in Stone. “From being the homes of great lords in the Middle Ages to being either homes of modern aristocrats or ruins (many castles were destroyed during the English Civil War), castles became both symbols of democracy and warnings to aristocrats that you had to always respect the power of the people.”

The paintings in the show date from the sixteenth century to the end of the nineteenth, and will be on display in a dense, salon-style hang in the Long Gallery in the YCBA’s recently refurbished Louis I. Kahn building. They will showcase different approaches to the depiction of the castle through the baroque, neoclassical, romantic, and impressionist periods. Highlights include two rarely seen studies—an expressionistic oil on millboard sketch by John Constable for his 1829 Hadleigh Castle (the finished painting is in the YCBA’s permanent collection) and Study for “Calypso’s Grotto”—about 1843, by Francis Danby; John Inigo Richards’s 1764 depiction of battered and crumbling Corfe Castle; and paintings of Windsor by Augustus Callcott, Edmund Bristow, and George Vincent. Fictional castles will also make an appearance, and the surprisingly tranquil Cottage on Fire at Night, 1785–1793, by Joseph Wright—which depicts an imperturbable fortress lit dimly by moonlight and the blaze of some peasant’s hut—is a folktale-worthy imagining.

Cottage on Fire at Night by Joseph Wright of Derby, between 1785 and 1793. Paul Mellon Collection.

Art in Focus exhibitions are produced through the Student Guide Program at the YCBA. Working with curatorial staff at the center, students in the program participate in all aspects of putting on a show, from deciding on topics and themes, through the selection of pieces, to the installation and the writing of wall texts and labels. During tours in April and May, student guides will lead visitors to the Collections Seminar Room adjoining the gallery where works on paper will be laid out, including a fifteenth-century sword-fighting manual and a map of the fortifications of Jersey made for Elizabeth I.