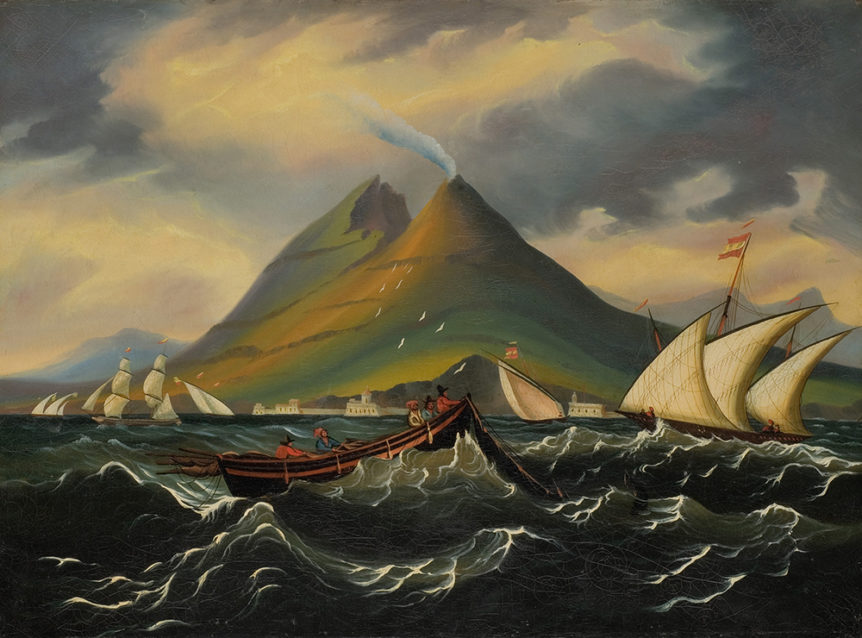 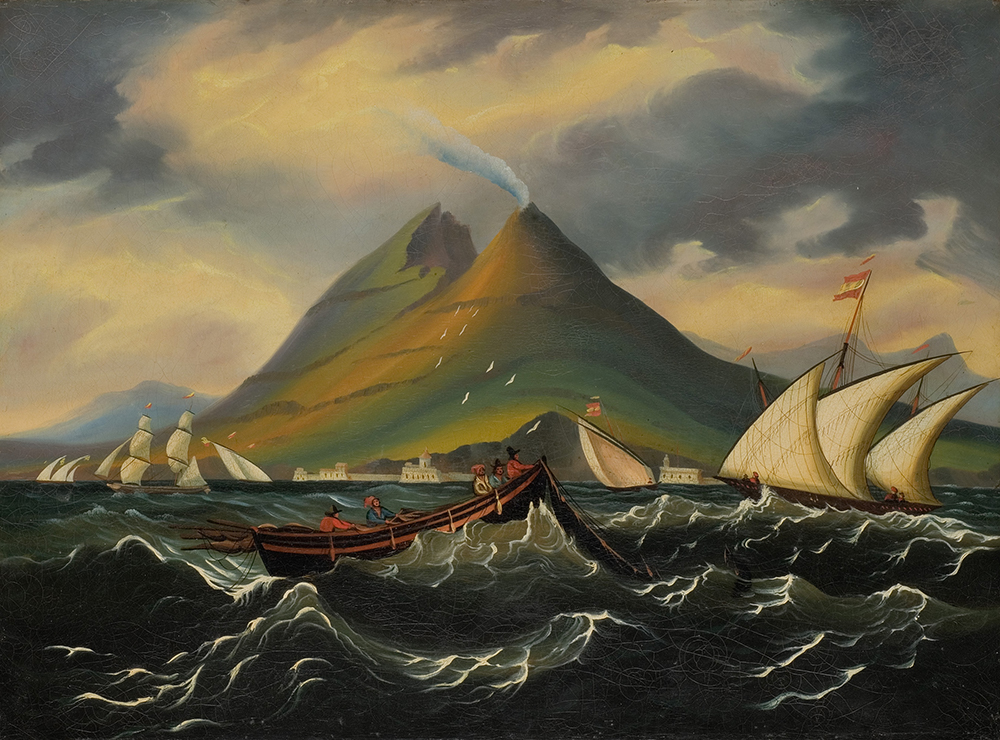 Mount Vesuvius and the Bay of Naples by Thomas Chambers (1808–1869), 1843–1860. All objects illustrated are in the Sidney and Lois Eskenazi Museum of Art, Indiana University Bloomington, Morton and Marie Bradley Memorial Collection.

The advertisements he placed in local and regional newspapers described “elegant oil paintings by European and American masters in splendid gilt frames” that were ready “for immediate removal to the Parlor.” Let the Thomas Coles and Sanford Giffords of the world woo rich patrons, the artist Thomas Chambers went after aspiring members of the middle class, eager to have tokens of refinement in their home—a sweeping vista of Niagara Falls or the Bay of Naples, or a stirring depiction of a battle at sea. 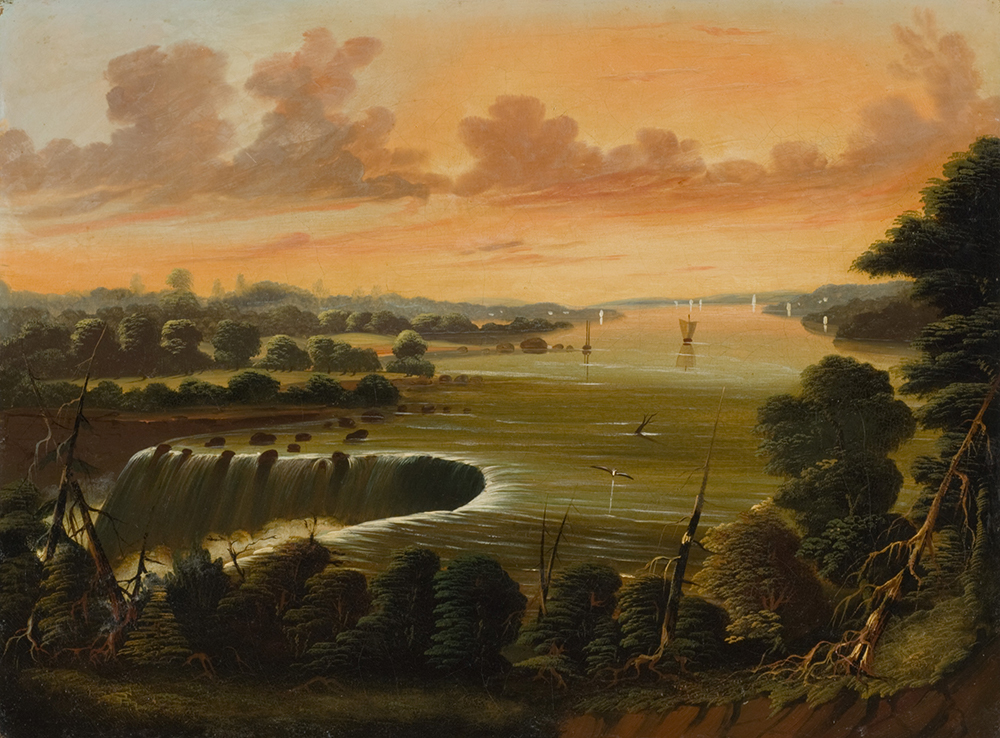 Chambers was no master. His work is intentionally decorative, clearly painted in relative haste. The details of his life are sketchy, too. Born in England, he landed in New Orleans in 1832, then spent the bulk of his career in New York and Boston before disappearing from the public record in the late 1860s. Chambers may have actually seen few of the landscapes he painted, let alone the naval engagements. The sources for most of his images have been traced to engravings and other prints. 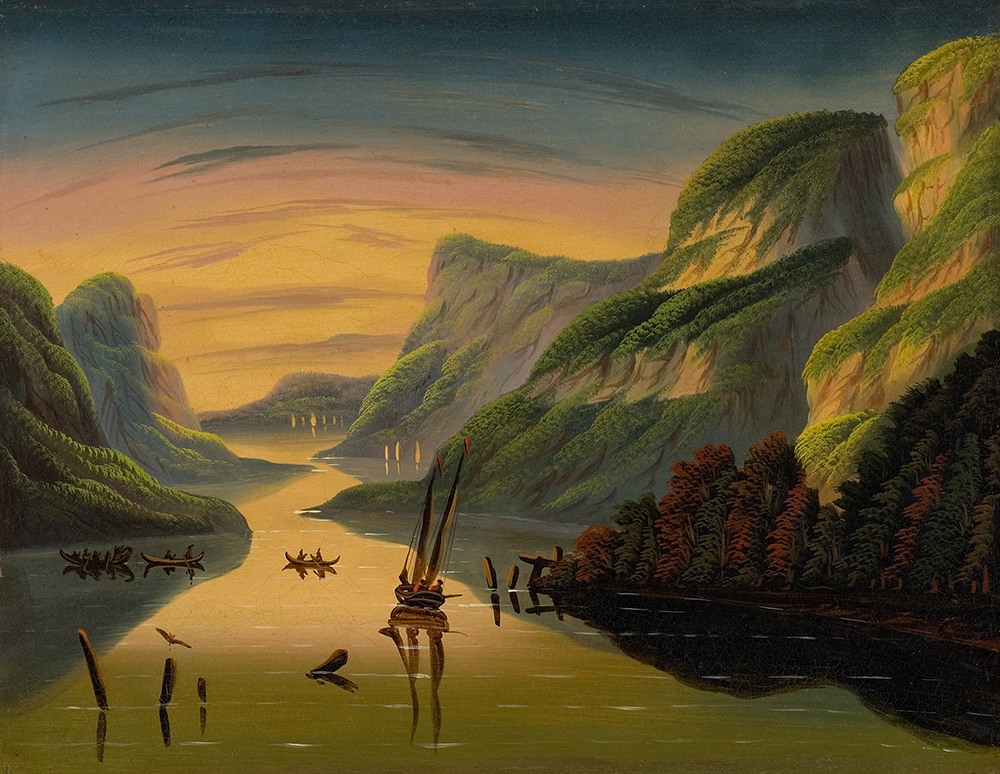 All that mattered little to Chambers’s customers— or to the folk art collectors and forward thinking curators who rediscovered his work in the mid-twentieth century. Both groups found appeal in the flatness of his brushwork, his vibrant mix of earthy tones and vivid colors, and his buoyant, off-kilter compositions, so reminiscent of the work of Thomas Hart Benton and Henri Rousseau. Some dubbed him “America’s first Modern.”

An exhibition now at the Speed Art Museum in Louisville is the first survey of Chambers’s work since the one organized by the Philadelphia Museum of Art in 2008. Those who missed that show—or its subsequent presentation at the American Folk Art Museum in New York—should head for Kentucky.