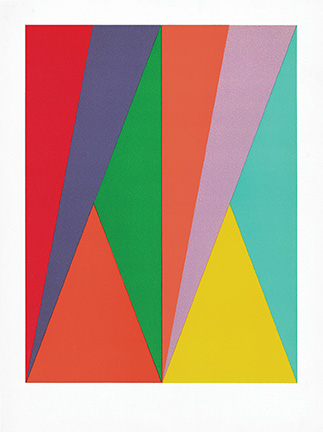 Electra Havemeyer Webb, the founder of the Shelburne Museum, was a collector of astonishingly wideranging interests. Her diversity of tastes is reflected in holdings that include carriages, decoys, weather vanes, and antique bedcoverings, as well as paintings by Manet, Courbet, and Monet, and the steamboat Ticonderoga. Yet with its pastoral Vermont setting and a campus dotted with examples of vernacular New England architecture, the museum is primarily associated by many with its outstanding collection of folk art and Americana. To those visitors, this fall’s exhibition of geometric abstract art from the 1930s through the 1980s—entitled HardEdge Cool: The Routhier Collection of Mid-Century Prints—may seem out of place. Mrs. Webb would have disagreed.

Toward the end of her life Electra Webb developed a strong interest in collecting modern art, acquiring pieces by such artists as Georgia O’Keeffe, Charles Sheeler, and William Zorach.1 In this, she joined cultural patrons such as Abby Aldrich Rockefeller in recognizing that it is not so great a leap from folk to modern art. Many progressive early twentieth-century American artists and designers looked to the nation’s folk art for inspiration, drawn to the “primitive” artists’ elementary visions and techniques.2 As Alfred H. Barr Jr., first director of the Museum of Modern Art, noted in 1948: “Remarkable for their intuitive and unhackneyed mastery of form and their simplicity of mind and heart, they [folk artists] can at their best hold their own with professional painters.”3

The parallels between folk art and geometric abstraction are striking. These two seemingly polarized styles both use simple lines and forms and flat planes of bold colors. Consider the aesthetic affinity between a log cabin quilt and an untitled 1964 Frank Stella screenprint included in Hard-Edge Cool (Fig. 4). In this eye-catching work, Stella brings harmony to visual dissonance through the careful orchestration of colors and forms. He builds a rhythm between alternating and opposed bands of neon yellow and royal blue, and creates tension with a diagonal line that bisects the composition. From a distance Stella’s forms appear precise, but a close inspection reveals subtle imperfections and jagged edges that show the presence of the artist’s hand at work—a sort of stitching, in a way.

But where a quiltmaker brought creative instincts to the making of something warm and practical, geometric abstractionists were crafting a new visual language. Their style’s stark lines and shapes often create more questions than answers for viewers used to a different sort of art, but, ironically, geometric abstraction is meant for a universal audience. Although at times suggestive of nature, geometric abstraction is the exploration of pure form and color. It is not meant to celebrate the artist’s individual genius; it does not depict the real world. Geometric abstraction is a thing in and of itself, uncontainable and timelessly fresh. It is about nothing more nor less than the viewer’s response to it. As Stella once put it: “What you see is what you see.”4

Stella’s untitled 1964 print was included in a portfolio entitled Ten Works by Ten Painters published that year by the Wadsworth Atheneum. As such, it had a special appeal to Jason and Dana Routhier of Northfield, Vermont. He is a graphic designer; she is a writer. They appreciate striking and forthright compositions, and they understand prints and print portfolios as tools of communication, as a means by which more people can experience and collect art. But the Routhiers’ understanding of art goes further. They have spent the past ten years thoughtfully putting together a collection of more than 350 prints—more than sixty of them appear in Hard-Edge Cool—that represent the work of various art movements, from the Bauhaus to minimalism, under the larger umbrella of geometric abstraction. Their choices include prints by lesser-known artists and by prominent ones such as Wassily Kandinsky, Max Bill (Fig. 5), Sophie Taeuber-Arp (Fig. 3), and Herbert Bayer (Fig. 2).

What interests the Routhiers and drives their accrual of art is the relationships among and the network of influences between this seemingly disparate group of artists. They are all somehow linked: through intersecting personal histories, by professional exchanges, or by sometimes mutual inspiration. What the Routhiers collect, essentially, are connections. Their collection comprises a sort of pre-digital artistic social network.5

One of the most direct connections in the Routhiers’ collection is between Kandinsky and Hans (Jean) Arp, a founder of the Dada movement.6 In 1912 Kandinsky wrote to Arp offering insight into a watercolor he painted that belonged to Arp. He noted that “the disharmoniousness (one might say, the negative rhythm) of the individual forms was that which primarily drew me, attracted me.”7 Two prints included in Hard-Edge Cool form a kind of dialogue between the artists. One is a 1930 abstract composition by Kandinsky published by the French art journal Cahiers d’Art (Fig. 6). Here, Kandinsky is still flirting with figuration, but his interplay of varying shapes, curved lines, and limited use of colors strategically organized on the page shows his departure into pure abstraction. Similarly, Arp’s lithograph Affiche St. Gallen I (Fig. 1), created more than thirty years later, is also using the primary colors red and yellow and converging, curving lines and forms—creating a work of art that echoes the spiritual rhythm in Kandinsky’s print. The entire show can be seen in terms of conversations between artists.

Perhaps visitors who come to the Shelburne for other current exhibitions of circus posters and American paintings will leave the show of the Routhiers’ prints with a changed understanding of abstract art. Mrs. Webb would certainly hope so.

Hard-Edge Cool: The Routhier Collection of Mid-Century Prints is on view from November 19 to January 22, 2017.

1 Webb acquired a selection of modern artworks from her friend the dealer Edith Gregor Halpert in 1960, including a still life by O’Keeffe, two paintings by Sheeler, and a bronze sculpture by Zorach, though following Webb’s death, these works of art were deaccessioned. 2 Museum of Modern Art, Art in Our Time: An Exhibition to Celebrate the Tenth Anniversary of the Museum of Modern Art and the Opening of Its New Building: Held at the Time of the New York’s World Fair (Museum of Modern Art, New York, 1939), p. 17. Mid-century designers such as Charles and Ray Eames and Alexander Girard’s enthusiasm for folk and “ethnic art” greatly influenced their admiration for lively colors and ornamental decorations. Pat Kirkham, Charles and Ray Eames: Designers of the Twentieth Century (MIT Press, Cambridge, Mass., 1995), p. 184. In 1949 Girard curated An Exhibition for Modern Living at the Detroit Institute of Arts, which included the Eameses and their use of folk and “ethnic” art in their interior designs. 3 Alfred H. Barr Jr., Painting and Sculpture in the Museum of Modern Art (Simon and Schuster, New York, 1948) p. 13. 4 Frank Stella quoted in a 1964 interview in Harold Rosenberg, The De-Definition of Art: Action Art to Pop to Earthworks (University of Chicago Press, 1983), p. 125. 5 The Museum of Modern Art’s seminal Inventing Abstraction exhibition and its supporting scholarship by curator Leah Dickerman has not only brought insight into the evolution of abstraction, but has also explored how this modern style was fostered through an international social network of artists and intellectuals. See Leah Dickerman, Inventing Abstraction 1910-1925: How a Radical Idea Changed Modern Art (Museum of Modern Art, New York, 2012). 6 Ibid., p. 14. 7 Kandinsky to Hans Arp, 1912, reprinted in Wassily Kandinsky: Gesammelte Schriften 1889-1916. Fabensprache, Kompositionslehre und andere unveroffentlichte Texte, ed. Helmut Friedel (Prestel, Munich, 2007), pp. 489-490; translated and discussed in Bibiana K. Obler, “Negative Rhythm: Intersections Between Arp, Kandinsky, Münter, and Taeuber,” June 12, 2014, artbooks.yupnet.org; accessed August 30, 2016. More on these artists’ relationships can be read in Obler’s Intimate Collaborations: Kandinsky and Münter, Arp and Taeuber (Yale University Press, New Haven, 2014).

CAROLYN BAUER is assistant curator at the Shelburne Museum.