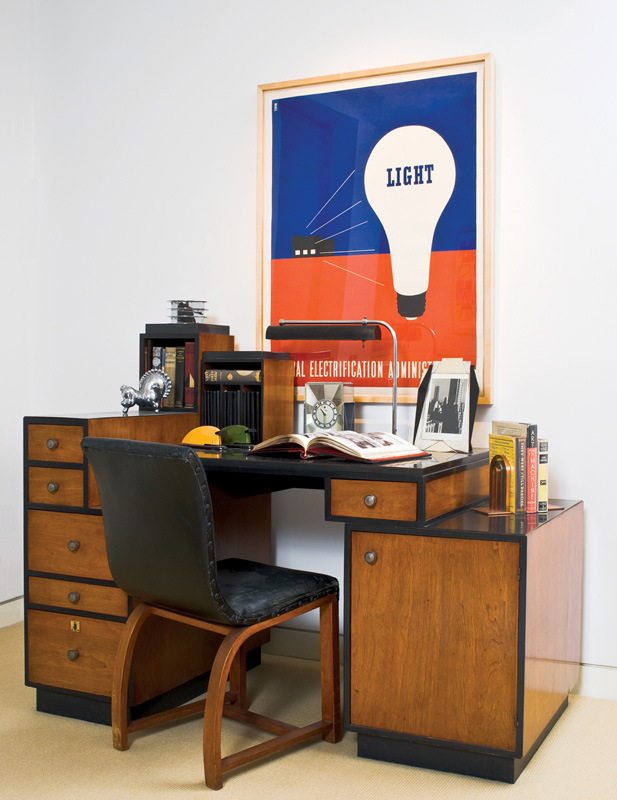 Photography by John M. Hall | from The Magazine ANTIQUES, May/June 2012 |

The art of today must be created today,” the designer and author Paul T. Frankl wrote in 1928. “It must express the life about us. It must reflect the main characteristics and earmarks of our own complex civilization.”1 Over the past four decades, collector John C. Waddell has explored the idea behind Frankl’s words. He has acquired objects that chart and celebrate America’s embrace of modernism during the second quarter of the twentieth century.

He bought his first piece of American modern design in 1972, a chromium-plated standing lamp with three stacked cones for a shade, designed in 1928 by Walter von Nessen (Fig. 1). Waddell also became a habitué of Fifty/50, the New York gallery that opened in the early 1980s and quickly became a clubhouse for aficionados of modern design. In 1983 the Yale University Art Gallery staged the exhibition At Home in Manhattan: Modern Decorative Arts, 1925 to the Depression, which helped solidify Waddell’s interest in this period. As his own collection grew, Waddell matched his “eye for objects” with scholarly rigor, maintaining correspondence with a wide range of dealers, curators, and scholars.

In 2000 Waddell gave a significant gift of objects to the Metropolitan Museum of Art. This donation formed the core of the traveling exhibition American Modern, 1925-1940: Design for a New Age. He has also been a long-time supporter of the Museum of Modern Art and the Brooklyn Museum, which presented him with the Brooklyn Museum/Modernism Distinguished Collector Award in 2008. A graduate of Yale College, Waddell recently gave a substantial portion of his collection to the Yale University Art Gallery. His gift is included in A Modern World: American Design from the Yale University Art Gallery, 1920-1950, a collection catalogue that explores American modern objects in all mediums.

Waddell’s New York City apartment is filled with striking examples of American design from between the wars. “My chief interest is an object’s place in the story of modernism that began to unfold here around 1925,” Waddell observes. “I tend to be primarily influenced by a work’s date and contribution to the historical narrative.” Initially he collected industrial material designed in the 1930s (see Fig. 3). Over the past decade, his collecting energies have narrowed to the second half of the 1920s, the years when American manufacturers and consumers first embraced modernism.

The political and cultural isolationism that pervaded the UnitedStates following World War I made many Americans skeptical of contemporary European design. “It is the easiest thing in the world to poke fun at the modernist movement in decoration,” House and Garden commented in 1921. “You can claim that interiors done in the modernist style would be difficult to live with. Or you can say that they do not fit our type of life here in America.”2 This skepticism began to fade, though, after Americans visited or read about the Exposition Internationale des Arts Décoratifs et Industriels Modernes held in Paris in 1925, which promoted the modernist movement. One American who visited the fair was Reuben Haley, a freelance mold maker for the glass and ceramic industries.3 Shortly after returning home from France, Haley worked with the Fulper Pottery Company on a striking ceramic pattern called Square Modern (Fig. 2). The angled, layered shapes show the influence of contemporary Czechoslovakian ceramics as well as of cubism. Fulper introduced Square Modern at the January 1926 glass and ceramic trade fair in Pittsburgh, a mere three months after the Paris fair closed. It is one of the earliest-known examples of modernist design produced by an American manufacturer.4

Haley is best known for the Ruba Rombic line he created for Consolidated Lamp and Glass in 1928.5 This extensive line of glassware had jagged profiles and faceted surfaces inspired by cubism. During the late 1920s Americans were fascinated by cubistic designs; the angular decoration was aggressively modern and matched the frantic exuberance of the Jazz Age (Fig. 5). Haley also designed the Rombic line of ceramic vases for Muncie Clay Products, which used similar fractured shapes and was introduced the same year as Ruba Rombic. Ruba Rombic glass and Rombic ceramics were among the most exuberant expressions of cubism in American design, but they were not alone. Over the years Waddell has amassed a broad collection of cubistic designs in glass, ceramic, silver, textiles, and even a cubistic clock.

Haley was not the only American who drew inspiration from the Paris fair. Donald Deskey was studying painting in Paris when he and his wife attended the exposition in 1925. He was so captivated by what he saw that he decided to return to New York and become a designer. In 1927 Deskey and his colleague Phillip Vollmer established Deskey-Vollmer Incorporated, which manufactured furniture, lighting, and other objects (see Fig. 4). A saw-tooth table lamp designed by Deskey in 1927 and a console table he designed in 1932 for the interiors of Radio City Music Hall show his joint interest in repeated geometric forms and avant-garde materials. The table lamp is chromium-plated metal, a technology that was only perfected for commercial use in 1924. Deskey helped pioneer the application of industrial aluminum for domestic purposes; the base of the console table is three strips of aluminum that curve elegantly at the base. Before establishing Deskey-Vollmer, Deskey sold a series of geometrically painted objects through Rena Rosenthal, whose eponymous shop was instrumental in promoting progressive design in America. In 1927 Rosenthal commissioned Fulper Pottery to manufacture a cigarette casket decorated with arcs and triangles. Deskey used a similar pattern in his own work, suggesting that he may have provided Rosenthal with the design for the casket.6

In addition to Americans who embraced modernism after visiting the Paris fair, there was a loose network of progressive European-born designers who had been active in the UnitedStates since before World War I, including Kem Weber, Joseph Urban, Ilonka Karasz, Paul Frankl, and others. Waddell has been interested in collecting the work of these figures, who actively promoted modern design to America and whose work often reflected their training at Central European craft and architecture schools. Weber arrived in the UnitedStates in 1914 to oversee the construction of the German pavilion at the San Francisco Panama-Pacific International Exposition.7 Unable to return to Germany due to the war, he remained in San Francisco and eventually settled in Los Angeles. In 1928 he engaged Los Angeles metalsmith Porter Blanchard to fabricate a suite of pewter and ebony tabletop items, including a pair of candelabra (Fig. 6). The stacked forms of the base relate to a line of furniture Weber designed in 1928 for the Grand Rapids Chair Company, and the asymmetrical foliate shapes show his familiarity with the Wiener Werkstätte.

Frankl, who trained in Vienna and Berlin as an architect before venturing to the United States in 1914, was one of the most vocal members of the European émigré community. A year after arriving in New York he opened an interior design studio in Manhattan that sold a mix of Asian imports and his own designs. Frankl’s approach to modern shapes and modern materials is seen in the Rond vanity set, created in 1928 for the Amerith Division of the Celluloid Manufacturing Company (Fig. 7). The set exploits some of the innovative plastics created during the 1920s with the growth of the American chemical industry following World War I. Two of these were Amerith and Amer-glo, pyroxylin plastics with a metallic luster, which Frankl employed in bronze, silver, and gold colors in an abstract pattern of overlapping circles punctuated by dots and stars. He used the vanity set in his 1930 book Form and Re-Form to illustrate the appropriateness of plastics for modern interiors.8

In 1925 Frankl produced his first pieces of Skyscraper furniture, which brought modernist architecture into the home.9 “The cliff dweller of today needs furniture created solely for his needs,” Frankl wrote, “pieces adapted to the modern apartment interior, styles expressive of the modern spirit in line, form and rhythm.”10 Waddell’s mahogany and Formica Skyscraper desk, made between 1927 and 1929, is one of Frankl’s most commodious designs (Fig. 8). The irregular arrangement of drawers, shelves, and pigeonholes echoes the setback profiles of contemporary buildings. Waddell uses the desk to display related designs, including a desk accessory designed by William Lescaze, a Libbiloo bookend from Russel Wright’s Circus series, a desk clock designed by Frankl for Warren Telechron, and a silverplate Skyscraper picture frame by Bernard Rice’s Sons.

The architectural theme also appears in the apartment in a coin-operated scale that towers above two armchairs (Fig. 9). The scale was patented in 1929 by Joseph Sinel for the International Ticket Scale Corporation. As printed on the front in stylized letters, the gleaming steel and painted iron scale promised “honest weight and your fortune printed on [a] ticket.” Similar scales were once frequent sights in stores and public spaces. Sinel transformed his version into a miniature skyscraper, literally allowing users to take their measure against modern architecture. The scale is flanked by two armchairs designed by Kem Weber for the Grand Rapids Chair Company. In 1928 GrandRapids introduced the Kem Weber Group, a dining room suite executed in sage green lacquered beech with carved walnut table tops. The same year, Grand Rapids fabricated a second dining suite for Weber, one that he designed for the Banning, California, residence of Ruth and Joseph Friedman.11 The Friedman armchair in the Waddell collection is maple, stained “lemon yellow,” and originally had “mustard colored” leather upholstery.12 Weber was a founding member of the American Union of Decorative Artists and Craftsmen (AUDAC), which was established in 1928 as a lobbying and support organization for modernist designers. AUDAC and the American Designers’ Gallery, also founded in 1928, fostered the promotion of modernism in the United States. The pamphlet for the American Designers’ Gallery 1928 exhibition, designed by Ilonka Karasz, hangs above the Friedman house chair while the catalogue for the 1927 Machine-Age Exposition, designed by Fernand Léger, hangs above the Kem Weber Group chair.

Most of the objects in Waddell’s collection were made in an industrial setting, although few were produced in large numbers. “There’s a common assumption that this material, being less than a century old and typically serially produced, has survived in abundance,” Waddell notes. “For many of the more important works, this is proving not to be true. Production was limited; demand was modest; and much has been lost.” A group of metal housewares makes this point (Fig. 10). Kem Weber intended his 1928 Today line for the Friedman Silver Company to include over one hundred designs, but fabrication apparently was cut short after fifteen were produced, underscoring how companies needed to balance innovation with profitability.13 A notable number of modern metal designs were for drinking paraphernalia, suggesting that early proponents of American modernism also enjoyed evading Prohibition. Bernard Rice’s Sons transformed a skyscraper into a silverplate cocktail shaker while Russel Wright explored austere geometric shapes for a pewter cocktail service. After repeal, Creative Design declared that “drinking, for America, is superbly modern.”14 But as the shakers in Waddell’s collection prove, for some Americans it always had been.

Over the four decades that Waddell has been collecting American modernism, he has seen it become firmly ensconced in the narrative of American material culture. “The window to collect the best of the earliest examples of American modern is nearly closed,” he reflects, although he remains undeterred as scholars continue to explore the late 1910s and early 1920s. “Any object reflecting the form and spirit of early modernism deserves a second look.”