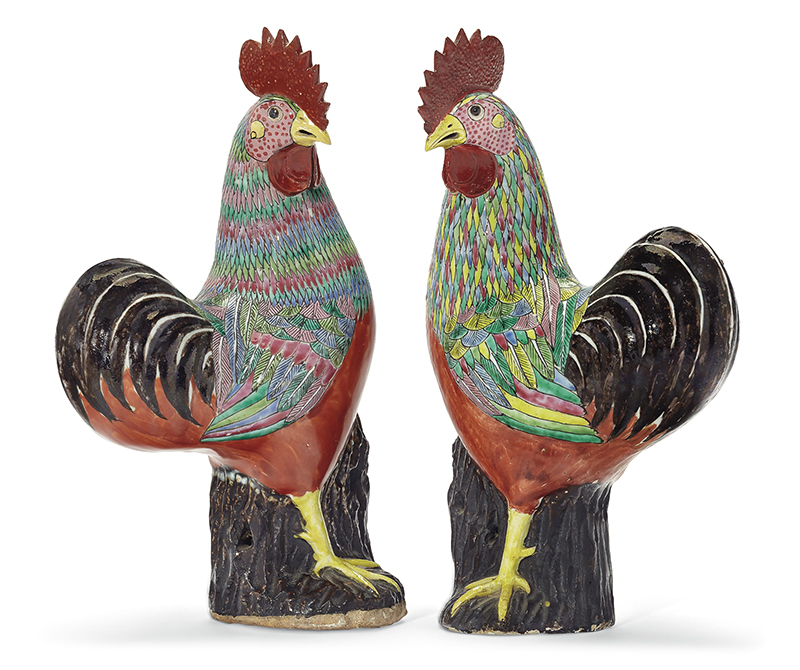 This cherry chest-on-chest’s case has a split pediment bonnet top and three flame finials, a molded-edge overhanging cornice above a fan-carved central drawer flanked by two smaller drawers, four graduated long drawers below, a lower case with four serpentine-front graduated drawers, a conforming base with cabriole legs and ball-and-claw feet, and what appears to be its original finish. Pine is the secondary wood.

An auspicious bird in China, associated with good luck as well as faithfulness and perseverance, the rooster was also one of the most favored models in Chinese export porcelain. These colorful cockerels date to the Qianlong period (1736–1795), and come from the Tibor Collection, which was amassed over some forty years by a Latin-American collector. This January Christie’s will be offering the third installment of artworks from this impressive collection, and besides these roosters, a flock of eighteenth- and nineteenthcentury examples of hawks, peacocks, ducks, and geese will be auctioned.

From 1878 to 1886, the French foundry Avoiron et Cie was authorized by sculptor Frédéric Auguste Bartholdi to make copperplated zinc statues from the artist’s fourfoot- high study model of the Statue of Liberty. These casts were made in sizes A (four feet tall), B (three feet), C (two feet), and D (twenty-six inches) and sold to help raise funds for the colossal project in New York Harbor. According to its census of documented Avoiron castings, the Statue of Liberty Club notes only twelve examples of “C” casts, the model and size of the one being offered at Neal Auction.

We will be offering a wonderful Charles Balthazar Julien Févret de Saint-Mémin drawing that boasts a handsome subject hailing from “two nations”: Virginia and South Carolina. The sitter is James Monroe Bankhead, born in Port Royal, Caroline County, Virginia on May 24, 1783. He joined the US Army in 1808 and served in various command and staff assignments, spending time on the staff of General Wade Hampton during the War of 1812. His service took him to Charleston, South Carolina, where he met and married Anne Smith Pyne. James Bankhead would go on to serve in the Mexican-American War, the Second Seminole War, and was eventually appointed commander to the Department of the East, headquartered in Baltimore. He served there until his death in 1856. One of his sons, John Pyne Bankhead, would be in command of the ironclad USS Monitor when it was sunk in 1862 during the Civil War.

Rarely do we encounter American metalwork of such monumental scale. This unusual and incredibly sculptural centerpiece epergne by the Meriden Britannia Company of Connecticut was the highlight of the firm’s display at the 1876 Philadelphia Centennial Exhibition, where it most certainly dazzled and delighted visitors. It’s hardly surprising that Meriden won a first place medal for their contribution to the fair.

At Pook and Pook

This incredible oil-on-canvas seascape by American artist John Stobart depicts the packet ship Margaret Evans and is signed in the lower right corner and dated 1968. The painting came out of a Maryland estate. The ship sailed regularly in the mid-nineteenth century between New York and London, and was so famous there was a sea chanty about her.

White Interior by Carl Moll is a work of remarkable pedigree. Preserved within the same family since its acquisition, it has never appeared on the market before. The work depicts writer and art critic Berta Zuckerkandl in her first apartment in Döbling, Vienna, where she held an influential salon attended by many intellectuals of the time, such as Gustav Klimt and Stefan Zweig. Moll, one of the founding members of the Vienna Secession, was famous for his serene, elegant, often bare interior scenes as exemplified by White Interior, which is marked by a sense of domestic tranquility through its careful balance of color and diffuse light. The painting shows Zuckerkandl surrounded by her significant collection of East Asian art, which she asked famous architect and designer Josef Hoffmann to showcase by creating a modern interior that emphasized simplified, functional forms. This is what makes White Interior a work of exceptional quality, rarity and power—all attributes that promise to generate great excitement within the various sectors of the art market and the world beyond.

This tobacco bag is an exceptional example of late nineteenth-century beadwork, which crosses the line into the realm of folk art. It is constructed of soft tanned deer hide sewn with sinew thread. The throat of the bag is playfully designed with small cut glass beads depicting a buck, with its head held high on one side, and a grazing doe on the opposite. The lower panels of the tobacco bag show warriors on horseback. The horses, like the deer are created with cut beads. These cut beads, when held in the light, sparkle.

Painted by Joshua Johnson, the earliest documented African American folk artist, this portrait exhibits many of his signature stylistic features, including almond-shaped eyes and wavy fingertips. The sitter is identified as Baltimore tavern keeper Thomas Donovan. This important work was included in the major 1987 Johnson catalogue and exhibition Joshua Johnson: Freeman and Early American Portrait Painter at the Maryland Historical Society.

This fabulous, eight-foot-long carved wood alligator comes from the collection of Paul M. Bentley of Oostburg, Wisconsin. On the belly of the beast is a pencil inscription that reads “Spring Point Keeper / 1939 – Maine.” The great Maine decoy carver Augustus “Gus” Wilson (1864–1950) was the keeper of the Spring Point light in South Portland, Maine, for several years. In addition to decoys, Wilson was known to have carved three life-sized tigers, two of which are in the Brooklyn Museum and one in a private collection. If not carved by the hand of Gus Wilson, it was certainly someone familiar with his work.

A George Nakashima Conoid dining table from about 1970 is among the top attractions at our upcoming design auction, an event that features an outstanding selection of American design, including rare works by Vladimir Kagan, Philip and Kelvin LaVerne, and Charles and Ray Eames, as well as many other great designers. Among the most significant contributions of Nakashima, who remains one of the most important American designers and makers, are his Conoid designs, which include tables and chairs. The offered table features a beautifully expressive slab top with live edges.

Two Dogs Fighting; Man Chasing Dog has everything one looks for in a Traylor. The oversized, multi-figure piece shows the artist’s mastery over space, his subject matter, and his mediums. Traylor’s signature, rarely included in his works, is embedded in the central section of the image, placing the artist actively amidst his subjects. This piece also has exceptional provenance: once in the Mendelsohn Collection, it is being offered from the collection of Jerry and Susan Lauren.

A famed antiques dealer, John Rosselli is a huntergatherer with a penchant for painted furniture. Decades ago, his dear friend and client Sister Parish, a legendary tastemaker full of sage advice, taught him that a successfully decorated room needs at least one painted piece in the mix to lighten the mood and add a sense of humor; he never forgot her dictum.

Rosselli’s first job in the 1950s in New York City was faux-painting imported Italian furniture. Soon thereafter, he embarked on his own as an antiques dealer and, for more than six decades, his love of trompe l’oeil and painted whimsy has rescued interiors from the dreary familiarity of a period room.

This eighteenth-century Italian rococo carved and painted wood console table with exuberant, fauxmarbleized top was bought in London several years ago. The fantasy of its painted surface, which resembles Italian Portoro marble, appealed to Rosselli as a reference tool. “The treatment feels fresh and spontaneous, the simulated marble is most unusual,” he says. “Despite a lifelong vocation as a decorative painter, I even learned a few new tricks!”

— Angus Wilkie, antiques dealer and consultant to the Stair sale

Florine Stettheimer was an artist’s artist—a painter, designer, and poet. While she exhibited periodically, she had no taste for publicity and did not relish participating in exhibitions. Nor did she require the financial rewards of selling paintings. Instead, she showed her paintings primarily through the salons that she and her sisters, known as “The Stetties,” held in their New York apartment. Their lifestyle was legendary, with Florine painting, Carrie decorating an enormous dollhouse, and Ettie writing fiction. Their salons brought together an elite intellectual circle of artists, poets, and actors. Florine was interested in art from many periods, especially those with an emphasis on decorative schemes of color, pattern, and rhythm. Bold color, faux-naïve style, and inventive compositions are all characteristic of her mature work.

This delightful example emphasizes her typical intense color and rhythmic patterns. The cord of the oversized electric light bulb dances like a ribbon around the seated performer, encircling her head in a halo of light. Stettheimer loved flowers and whimsy, as seen here in the colorful arrangement and the tiny red mouse in the lower right.

— Robin Starr, director of American and European works of art