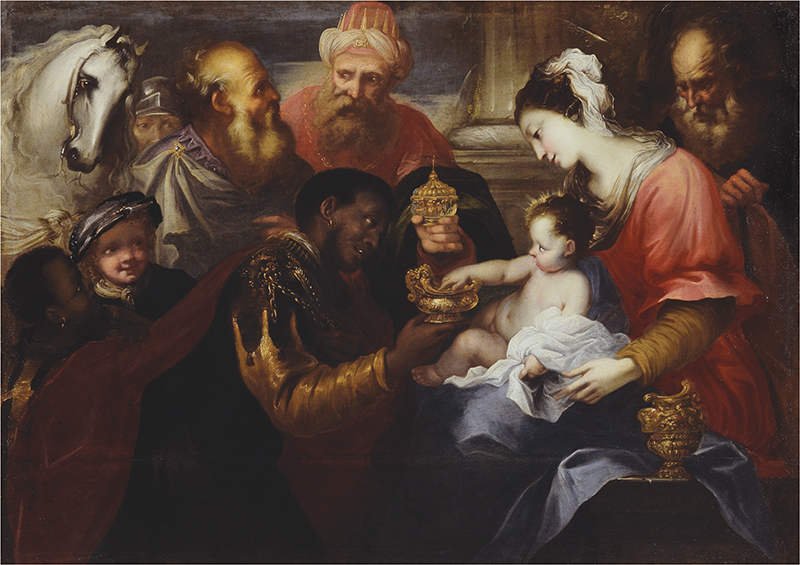 Although Genoa is a great and ancient city, most visitors to Italy never make it to the Ligurian capital and never discover its hidden splendors. Fortunately, a forthcoming exhibition in Rome and Washington, DC—A Superb Baroque: Art in Genoa, 1600–1750—will introduce art lovers to such neglected masters as Bernardo Strozzi, Valerio Castello, Domenico Piola, and Giovanni Benedetto Castiglione. The exhibition’s approximately 130 paintings, drawings, and sculptures will include works not only by these local artists, but also by the many eminent foreigners who passed through Genoa, among them Rubens, van Dyck, and Simon Vouet.

The show’s title invokes Genoa’s status as La Superba, the Proud, and it takes up the tale at a time when the city and its territories stood squarely within the Spanish sphere of influence. Enriched by the sale of silk, iron, and paper, Genoa had been, by this point, a center of finance for nearly two centuries. By the second half of the Cinquecento, the wealth of the city’s grandees found expression in the great palaces of Galeazzo Alessi and the noble paintings of Luca Cambiaso. And the adornment of the city that began in those years persisted in the work of their successors, the focus of the forthcoming exhibition.

But the embedded formalist premise of the show, curated by Jonathan Bober, Piero Boccardo, and Franco Boggero, is somewhat problematic. Through a kind of déformation professionnelle, one suspects, these scholars seek and find a great number of trends and influences in the works of the artists in question. Such discerning of influence is the sport of scholars throughout the field of Old Master painting, and all of their academic training has predisposed them to take up the task. But to find so many trends—even if they have been accurately perceived—is really to find none at all. When we look at the art made in Naples and Rome at that time, a few trends clearly predominate and surely our understanding is en- riched once we have discerned them. But in Genoa, these influences are so fickle and inconstant as to suggest that each painter simply engaged in his own way and on his own terms with the great mass of late mannerist, baroque, and rococo motifs that were floating around Genoa—and Europe—at the moment when he set brush to canvas. This very lack of a clean and legible stylistic mainstream may that never existed. If there is one thing, however, that unites the painters of Liguria it is an ad hoc, immethodical love of beauty for its own sake. Amid a welter of stylistic influences, this pursuit of aesthetic ravishment may well be the one point of commonality among its myriad artifacts, a quality that extends even to the city itself. Nothing in the churches and palaces of Venice and Rome, for all their purity and high purpose, can match the sensory onslaught of the gilded interiors of the Basilica della Santissima Annunziata del Vastato and the Palazzo Carrega Cataldi.

The Genoese masters consistently respond to the dark and violent influences of Rome and Bologna by purging them of their bane and distorting them into loveliness. The dramas of Caravaggio and explain the larger public’s perennial unfamiliarity with this art.

Still, several general points can be made with regard to Genoa’s baroque painters. One paramount fact— though scholars assert the contrary without much evidence—is that, despite the arrival of Rubens in 1604 and of van Dyck roughly a generation later, neither seems to have had much effect, direct or indirect, on local practice. As regards those Italian masters who did indeed influence it, Genoa’s painters were receptive to all of them, but faithful to none. The influence of Caravaggio and Annibale Carracci, which dominated Rome for much of the seventeenth century, appears in one work by a given master only to be discarded in the next. Regarding composition, color, and mood, some of the most persistent influence comes from Milan at a time when Milan itself was a disorderly tangle of styles.

Given such a complex and even messy state of affairs, how can the general run of art lovers make sense of this multifaceted exhibition and the art that it celebrates? The answer is simple: they shouldn’t try too hard. Rather they should surrender to its sundry beauties without undue concern for some grand stylistic synthesis Guercino are duly reenacted, but subtly transformed. For all its pockets of darkness, the overriding fact of Bartolomeo Biscaino’s Adoration of the Magi (Fig. 1) is the beauty of the Madonna herself, whose charm, unlike that of Raphael’s Madonnas, cannot be severed from a potent sense of physical appeal. Valerio Castello’s nearly contemporary Diana and Actaeon with Pan and Syrinx (Fig. 2) deflects the violence and rapine of its subject by reducing the painting to a stylized frieze enlivened by the smoldering burgundies and cobalt blues of the female figures on the left. Similarly, Bartolomeo Guidobono’s steeply angled Lot and His Daughters (Fig. 3) looks to have been painted in a flash of lightning: as striking as the two pale and naked women emerging from the darkness are the perfectly painted peaches at their feet and the golden inferno behind them. Even an admittedly somber master like Gioacchino Assereto, author of the lurid Suicide of Cato (Fig. 4), could produce a work of such dazzling, sunlit tonalities as Alexander and Diogenes (Fig. 5).

One other quality of Genoese painting during this period deserves mention: an unparalleled fascination with pigment itself. In the baroque paintings of Rome and Naples without exception, and of Venice and Milan with few exceptions, the medium of paint counts for nothing: it obliterates itself in the very conveyance of what it depicts. Among the Genoese, however, the thickly textured paint strokes refuse, as often as not, to sacrifice themselves to their stated subject.

This defines the work of Bernardo Strozzi, almost certainly the finest artist ever to emerge from the Ligurian capital. Strozzi serves as a powerful lesson in the futility of trying to box the Genoese baroque masters into neat patterns of influence. While his powerful but highly stylized Vision of Saint Domenic (Il Paradiso) (Fig. 8) betrays the unmistakable traces of international mannerism, his Cook (Fig. 6) is a humble kitchen scene in which a ruddy young woman, modeled on the work of painters north of the Rhine, plucks the feathers off an assortment of fowl. In both paintings, a rich and continuous weft of paint unfurls across the canvas in lowest relief, drawing attention irresistibly to the material foundation of the work.

This painterliness recurs in the art of Giovanni Benedetto Castiglione, second only to Strozzi among the city’s baroque painters. Influenced by the Flemish painter Cornelis de Wael (Fig. 10), Castiglione far surpasses him in the quality of his figures and in the restrained fullness of his compositions. Rustic scenes like Noah’s Sacrifice After the Deluge (Fig. 7) abound in cattle and sheep, not to mention cats, rabbits, and guinea pigs. If that sense of fullness has been achieved through Castiglione’s study of the sixteenth-century Venetian master Jacopo Bassano, a touch of timeless mythology, of poesia, suggests that he has also seen the masterpieces of Poussin’s middle period. In his varied depictions of fur one often finds an interesting detail, a sharp sequence of parallel strokes, as if from a palette knife, that Castiglione learned from Strozzi (who may have learned it from Domenico Fetti) and that he bequeathed, a century later, to François Boucher.

One final painter deserves mention in this brief introduction, Gregorio de Ferrari, who exemplifies a delightful variant of the aforementioned painterliness. It consists in a quality of relentless billowing, as though the figures were borne weightlessly aloft on a warm breeze. We find this windswept quality, enhanced by the exhilarating lightness of the paint itself, in the Louvre’s Juno and Argus (Fig. 11), perhaps the artist’s finest work. But this quality appears as well in The Infant Moses with Pharaoh’s Crown (Fig. 9), the figures of whose darkened background float around the brightly illuminated child in the center. Here, as in so many works in the forthcoming exhibition, the paint itself feels like a cross between a feather and a flame. There is no reason or justification for this delightful quality other than that imperative quest for beauty that is the defining feature of the Genoese baroque.