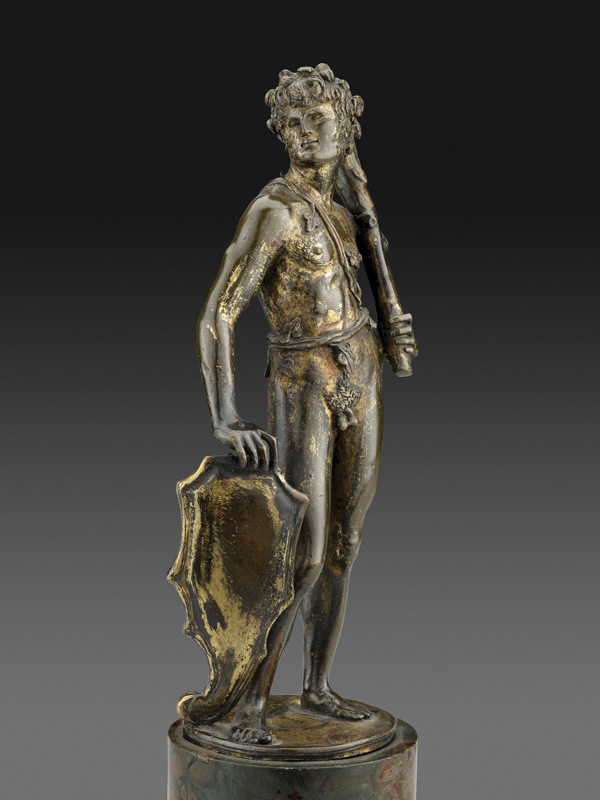 The thrill of resurrection pervaded the Renaissance in Italy: in addition to the aesthetic rewards that this movement produced, it reawakened cultural possibilities that had lain dormant for a thousand years. Everything from palaces and Latin epics to equestrian statues and bronze medallions took on an added glory through the sanction of ancient precedent and the idea that what had once been could be again.

And so it was that the statuette, a genre widely admired in classical antiquity and mostly forgotten in the Middle Ages, was reborn in Quattrocento Florence. Whereas ancient statuettes were often placed as votive objects on the altars of Hercules or Venus, in Renaissance Tuscany they were purged of their original religious power to become objects of a very different devotion, the cult of art. By the hundreds, if not the thousands, these costly objects reached to many parts of Italy and beyond, and are now encountered often enough in museums that it takes a special effort to remember how marvelously new they seemed when they were reintroduced in the middle of the fifteenth century.

One of the agents of their resurrection was Bertoldo di Giovanni, the student of Donatello and the teacher of Michelangelo, and now the subject of a show at the Frick Collection. Through a kind of curatorial tour de force, nineteen of the twenty-some works attributed to Bertoldo are now on view in an exhibition ably organized by Aimee Ng, Alexander J. Noelle, and Xavier F. Salomon. Perhaps the most important incentive to mount this show was the fact that the museum owns the only statuette by Bertoldo outside of Western Europe, a gilt-bronze depiction of a young man with a club and a shield, which was acquired in 1916 (Fig. 1). But because it entered the collection during Henry Clay Frick’s lifetime, the terms of the Frick Collection’s charter forbid it to travel, and so all of the other objects had to come to it. No one is quite certain who is depicted in this work or in a very similar figure from Vienna’s Liechtenstein: The Princely Collections that is also in the show. Although both bear some resemblance to Hercules, the Frick’s object seems far too young and wiry to be the muscular demigod: some scholars have suggested that both works depict a wild man, an archetypal character that haunted the imagination of medieval Europe. We simply do not know and perhaps we never shall. The creature in question stands nine inches tall, like his Viennese counterpart; but as is the case with all good Renaissance statuettes, his personality reaches beyond his humble dimensions, animating inert metal into something like life.

Bertoldo di Giovanni was born in Florence around 1420 to German immigrant parents, and he died at the Medici villa in Poggio a Caiano in 1491, a year before the death of his great patron, Lorenzo the Magnificent, in whose household he passed the greater part of his career. Bertoldo commands our attention both as a student and collaborator of Donatello and as a teacher of Michelangelo Buonarotti. One of his greatest services to culture was as the keeper of Lorenzo’s fabled sculpture garden beside the Convent of San Marco in Florence. This little academe gave rise to some of the brighter names of Renaissance art, among them Pietro Torrigiano, Francesco Granacci, and Michelangelo himself, who, within the walls of the garden and among Lorenzo’s antique sculptures, revealed the first fruits of his genius. In the four centuries that followed Bertoldo’s death, he was largely known for that secondary role, his own sculptures having been almost completely forgotten. He is indeed mentioned in Vasari’s life of Michelangelo, but mainly to diminish any part he might have played in the younger artist’s evolution. Only in the final years of the nineteenth century, when connoisseurs began to acquire a new taste for Renaissance bronzes, was he rediscovered by the German art historian Wilhelm von Bode and only then did he begin to assume a legible artistic profile.

The Frick exhibition is the first show ever devoted to Bertoldo. But it is not necessarily a show for the casual viewer. First of all, the diminutive size of many of these works calls for a greater degree of attention than we usually bring to our inspection of art. Then there is the fact that only two of his works are signed and universally accepted: the rest are conjectures and few of them are without doubters. Perhaps most challenging of all, these works are so divergent in style that no uniform sense of the artist emerges: if his modeling of the figure is often schematic, as are the Shield Bearers, at any moment he can summon an impressive realism. The works attributed to him are fully realized in the round or flattened to the lowest of bas-reliefs, by turns monumental and comical, compositionally simple or complex.

Although the portrait medallions in the present show, depicting among others the Holy Roman Emperor Frederick III (Fig. 5) and Sultan Mehmed II (which is signed, Fig. 4), cannot hold a candle to the contemporary works of Pisanello, Bertoldo is redeemed in his only other signed work, the superb Bellerophon Taming Pegasus (Fig. 3). Not only is this sculpture finely detailed, but it perfectly embodies the restive energy of the rearing, winged steed.

Although Bertoldo is most often associated with burnished bronze, his largest and most striking creation (if, as always, one accepts the attribution) is a polychrome wooden sculpture of the naked Saint Jerome (Fig. 6). It is thought to have been conceived by Donatello—since it bears a general resemblance to his Mary Magdalene—and completed by Bertoldo, who also completed Donatello’s two great bronze pulpits in the church of San Lorenzo. This work displays a degree of naturalism that one attributes more to northern late Gothic sculptors than to those of the Florentine Renaissance.

Entirely different, however, are the five fresh panels of blue and white terracotta, nearly fifty feet long in all, that make up the frieze on the façade of the Medici Villa in Poggio a Caiano (it was removed in the mid-1960s, and replaced by a facsimile in 1986, Fig. 9). Five different hands are discerned in these vague, schematic, and episodic depictions of the ancient world. One of those hands presumably was that of Bertoldo, who probably conceived the overall design. That all five of the panels should have been transported across the ocean is one of the most impressive virtues of the Frick exhibition.

One suspects that a powerful reason for Bertoldo’s posthumous slide into anonymity was precisely that lack of a clear artistic profile that characterizes the diverse objects on view at the Frick. An instantly recognizable and highly personal style, such as we find in Pisanello or Riccio or Severo da Ravenna, is nowhere in evidence in the works of Bertoldo di Giovanni. But the nineteen designs on view, taken together, do add up to a potent artistic personality that is the more striking for coming to light after centuries of obscurity.

Bertoldo di Giovanni: The Renaissance of Sculpture in Medici Florence is on view at the Frick Collection in New York City to January 12, 2020.