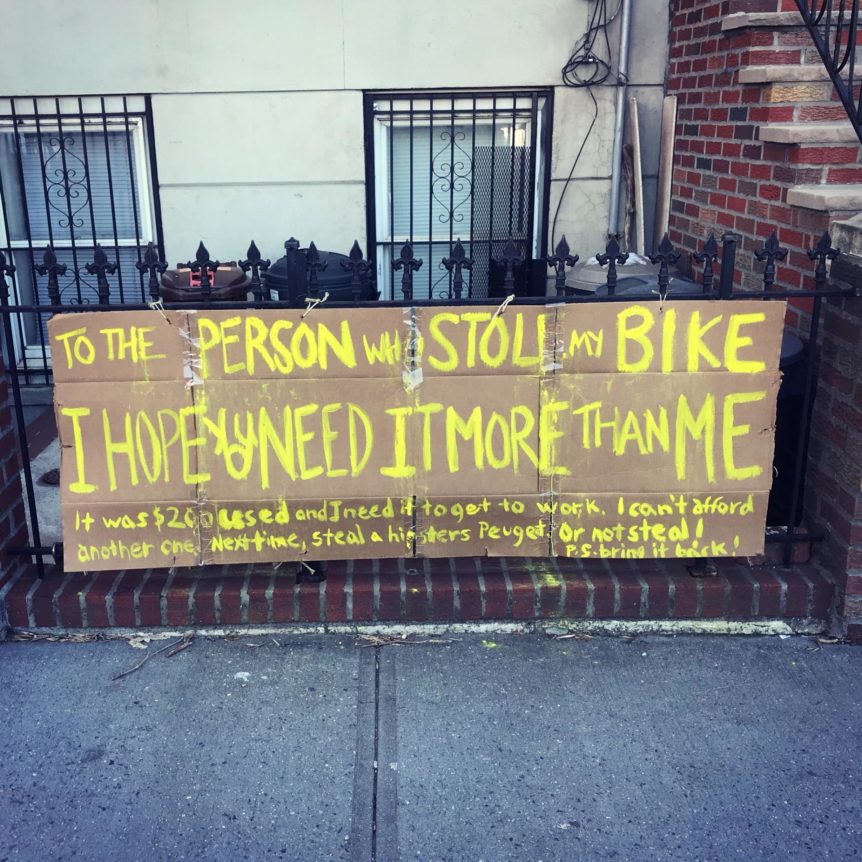 Strange and compelling signage is not a rarity in New York, as anyone who has tried to decipher a city parking regulation notice can attest. But the large handmade placard shown below stopped Steven S. Powers in his tracks as he moved through his Brooklyn neighborhood on a recent Saturday morning. It reads:

To the Person who Stole my Bike

I Hope you Need It More than Me

another one. Next time, steal a hipster’s Peugeot. Or not steal!

Powers, an artist and the current president of the Antiques Dealers Association of America, has an eye for the offbeat and idiosyncratic. “Graphically, the sign just grabbed me with the poster-paint yellow and that lettering,” he says. “I had to stop and look at the thing.”

He took a photograph of the sign and posted it on Instagram. The image quickly prompted comments. One person wondered if the sign would be the next thing stolen. Powers wrote: I’m actually thinking of buying the sign so they can buy a bike. 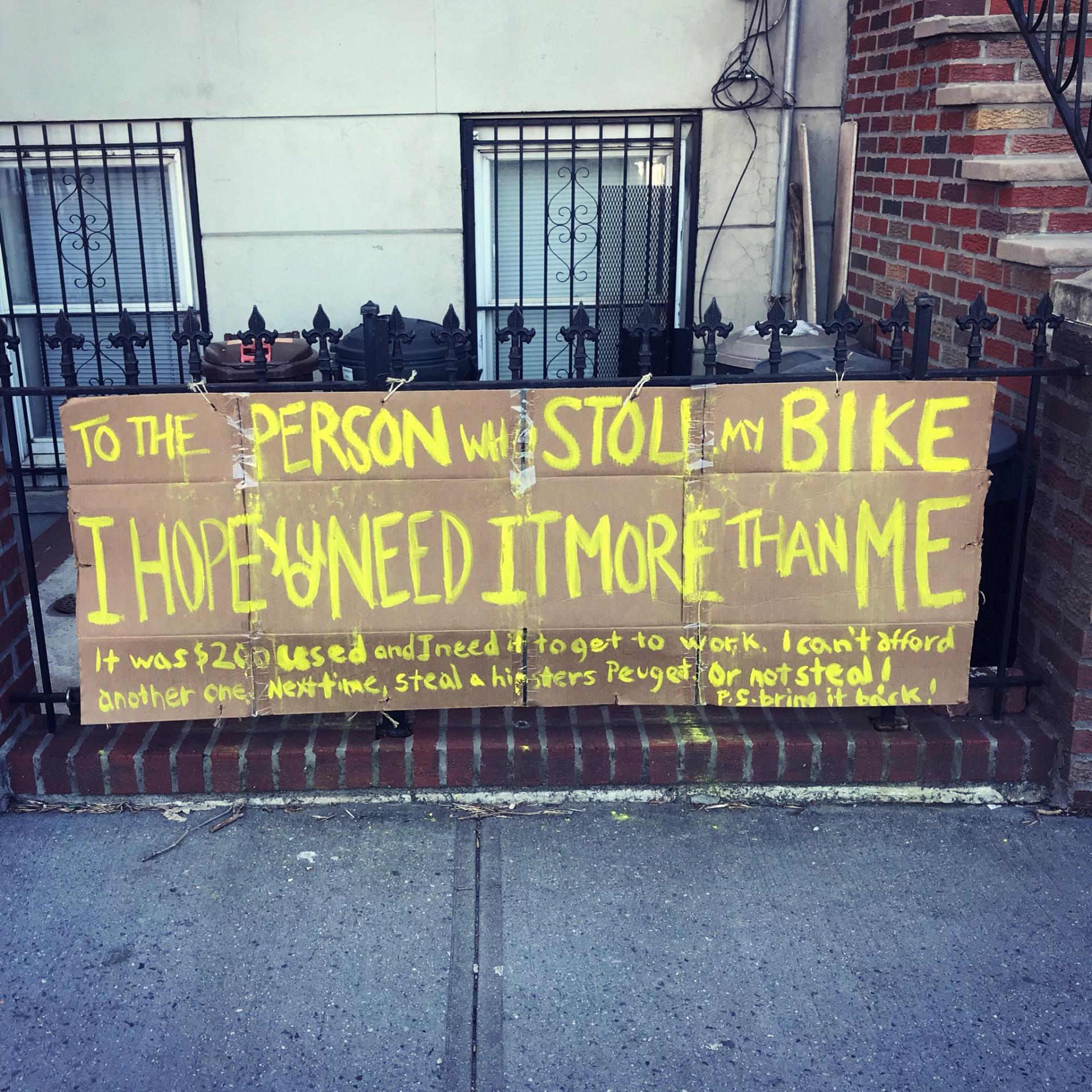 In London, Robert Young, who deals in folk art, was moved by the hand-painted cri de coeur. “My first thought was ‘poor buggers,’ and when I saw that Steve had a notion to buy the sign I immediately offered to share in the purchase,” Young says. “I loved the sign. There was something raw about it. So much passion. I loved the graphics—the way the ‘you’ is all squashed up. No one writes by hand anymore. The sign was a wonderful document.”

Young’s proposal “was all the trigger I needed,” says Powers. Later that day he visited the brownstone where the sign was hung and—making a lucky guess among three choices—pressed the apartment buzzer of the person who made it.

She turned out to be a thirty-four-year-old freelance video producer and substitute teacher in the New York City public schools named Amanda. Powers offered her $200 for the sign, and he said she seemed incredulous at first. “I explained that I appreciated the sign as an artist and an art dealer,” he says.

She gratefully accepted. “The sign was my artistic intervention into the world of sadness,” says Amanda, adding, a bit sheepishly: “I put more effort into making the sign than I did into locking my bike.”

Young says that he’s been “touched by how many people have reacted to my Instagram post about the sign”—nearly 700 “likes” as of this writing. He and Powers haven’t figured out the logistics of their joint ownership of the sign. “We can’t have Solomon’s Judgment and chop it in two, though selling it is not the point,” Young says. “It was just a spontaneous gesture. Best $100 I ever spent.”

There’s a pleasant, paying-it-forward postscript. Days before Powers visited, a pair of young men dropped by to offer Amanda their spare bicycle. It was a mountain bike, sized for a teenage boy, with two flat tires. Amanda was too heartened by their generosity to refuse the bike, and promised to “find it a good home if I can’t use it.” She’s taken it to her local repair shop, Court Cycles, where it will be fixed up so it can be given to a bike-less kid. (You can follow developments in this story at Amanda’s Instagram account, @realtinytrumpet)

“The coolest part of this whole episode is the humanity of the situation,” says Amanda. “I’ve been talking to my neighbors and meeting a whole new community of people. Our world might turn out okay if more people put out hand-painted signs.”