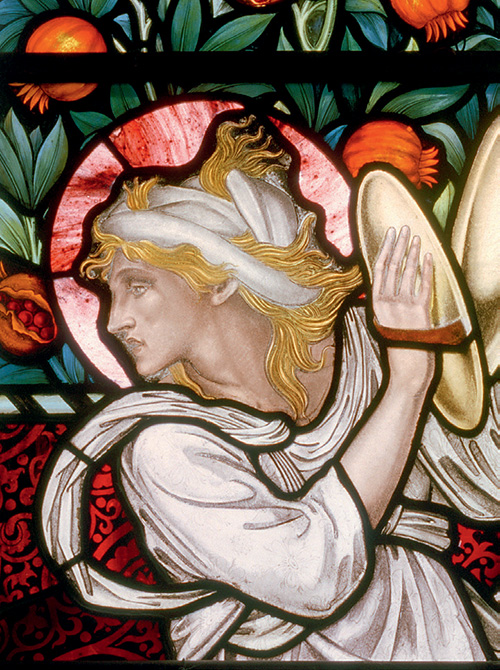 All photographs by Alastair Carew-Cox, courtesy of Seraphim Press.

One of the oldest art forms, stained glass exerts a magical allure that proceeds from translucence—light passing through the composition rather than just reflecting off its surface as on a painting or sculpture. As architectural elements meant to bring daylight to an interior, stained glass windows are forms of decorative art. But as flat, often pictorial works, they are effectively forms of painting—and can lay claim to the mantle of fine art. This claim was never more persuasive than in Victorian England. As varied interpretations of Gothic, Romanesque, and classical revivals competed in the construction of churches, secular public buildings, and domestic interiors, it was a particularly fruitful, innovative period for stained glass design and production. 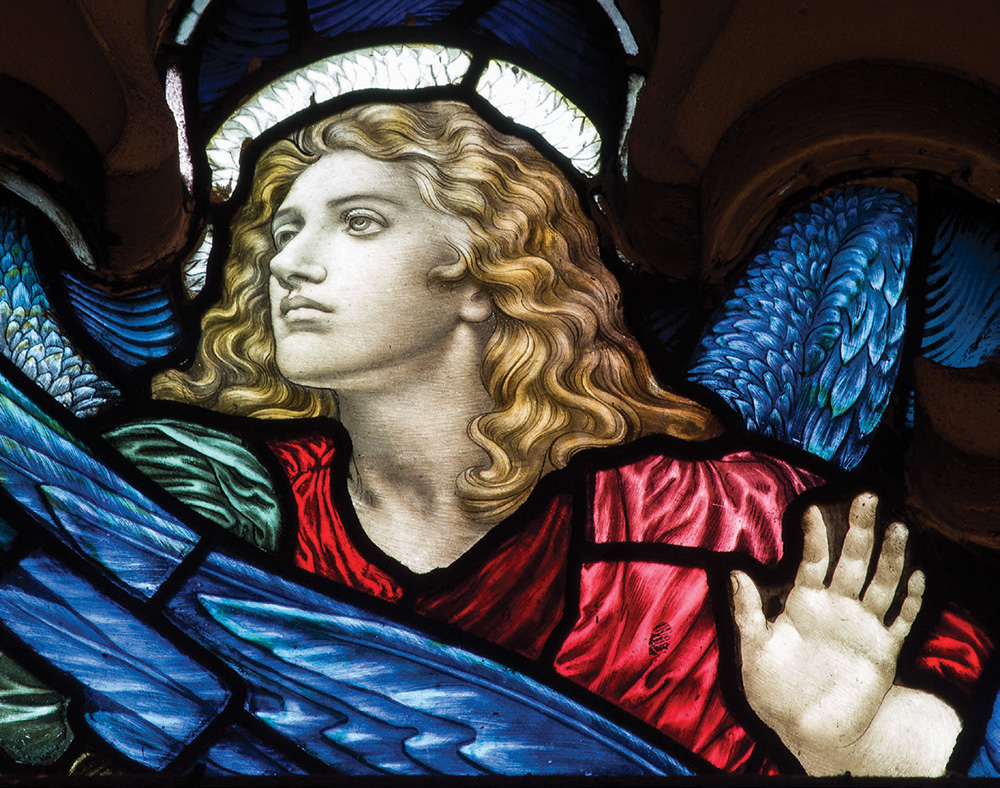 Head of an Angel, St. Margaret’s Church in Westminster Abbey, London, by Henry Holiday, 1883. All photographs by Alastair Carew-Cox, courtesy of Seraphim Press.

This sumptuously produced volume forms the sequel to the same team’s 2012 Angels & Icons: Pre-Raphaelite Stained Glass, 1850–1870. One author, William Waters, an art historian at Lancaster University, is a Pre-Raphaelite specialist currently working on a catalogue raisonné of Sir Edward Burne-Jones. The other, Alastair Carew-Cox, who runs the publishing house Seraphim Press with his wife, Debra, is an architectural photographer. Their work combines thorough research, engaging prose, and beautiful illustrations—many of them full page—that vividly convey the color, subtlety, and luminiscense of these extraordinary windows. 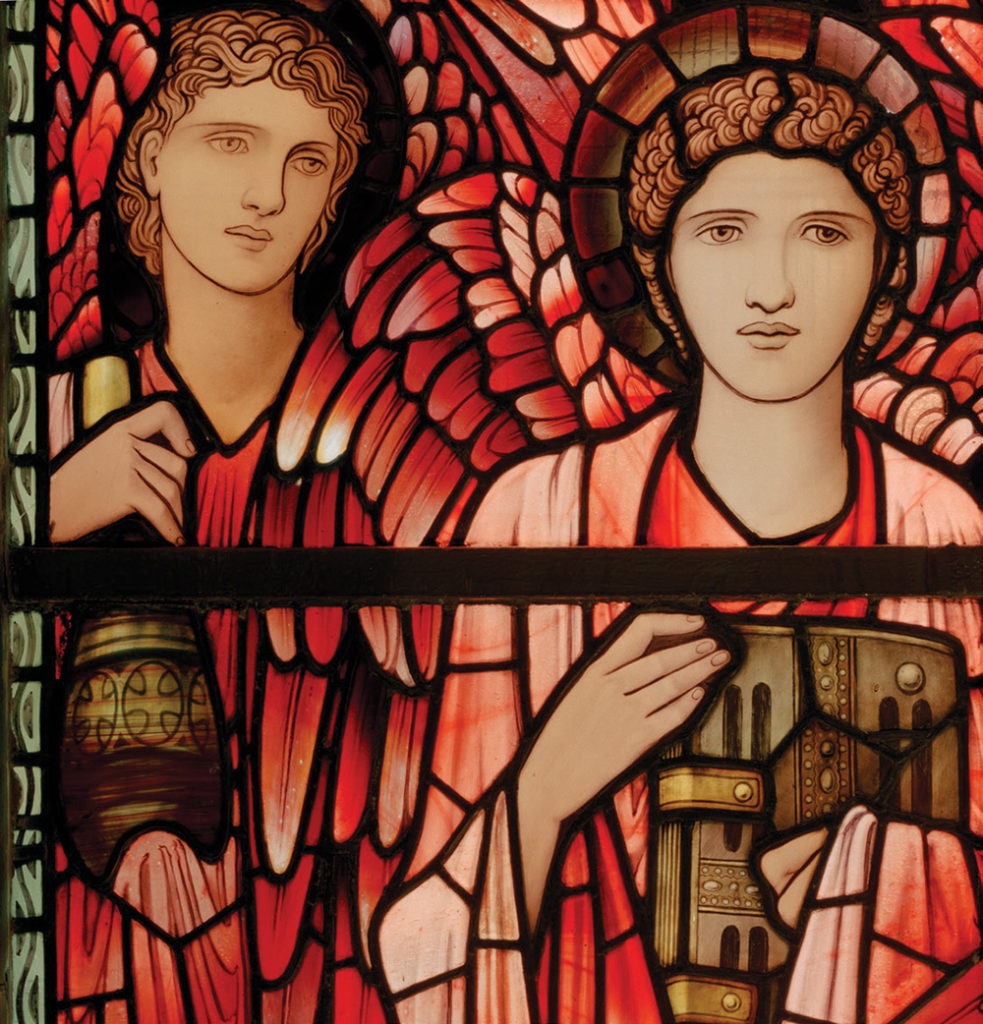 Detail of The Last Judgment, window in Birmingham Cathedral, by Edward Burne-Jones for Morris & Co., 1897.

Bearing his profound knowledge gracefully, Waters relates the complex history of late Victorian stained glass, setting the central narrative—the windows, their designers, and their manufacture—against the unfolding background of late nineteenth-century Britain’s aesthetic coming of age, as the Pre-Raphaelite spirit of Dante Gabriel Rossetti, Ford Madox Brown, William Morris, Burne-Jones, and their gifted satellites fostered the rise of the aesthetic movement, arts and crafts sensibilities, and, eventually, symbolism. And though considerable stained glass continued to be designed according to longstanding conventions of neo-Gothicism (much of it quite attractive in its own right), the principles of aestheticism led to a revolutionary freedom of composition and a bracing emphasis on beauty for its own sake without moral implications—even when treating religious themes. Indeed, an underlying principle of aestheticism had been stated by the voluptuary Rossetti when reviewing Albert Moore’s painting, Azaleas, in 1868: “one more beautiful thing is achieved . . . and its meaning is beauty; and its reason for being is to be.”

Though the emphasis is on windows in England, the authors document relevant stained glass throughout the British Isles, and include several examples in the United States. The partnership of Morris and Burne-Jones deservedly takes first place, but full chapters are devoted to the extraordinary work of less familiar designers, including the polymath Henry Holiday (probably best known for his painting Dante and Beatrice at the Walker Art Gallery, Liverpool, and for his witty illustrations for Lewis Carroll’s Hunting of the Snark), Daniel Cottier, John William Brown, Harry Ellis Wooldridge, and others. There are discussions of the important firms that produced stained glass, including James Powell & Sons, and Heaton, Butler & Bayne, as well as Morris & Co. Chapters cover studio assistants and their work, domestic stained glass, and, most significantly, cartoons—the initial working drawings produced by designers, which offer an important but often overlooked area for collectors in this field.

Special Offer!
Damozels & Deities is available to readers of The Magazine ANTIQUES at the special discount price of $98, which includes international shipping—a savings of $30. The first volume in the series, Angels & Icons, is available to Antiques readers for $84, shipping included.

To order with a check, send your payment and delivery details to:

To order and pay by wire transfer, email a_carewcox@yahoo.co.uk for details.