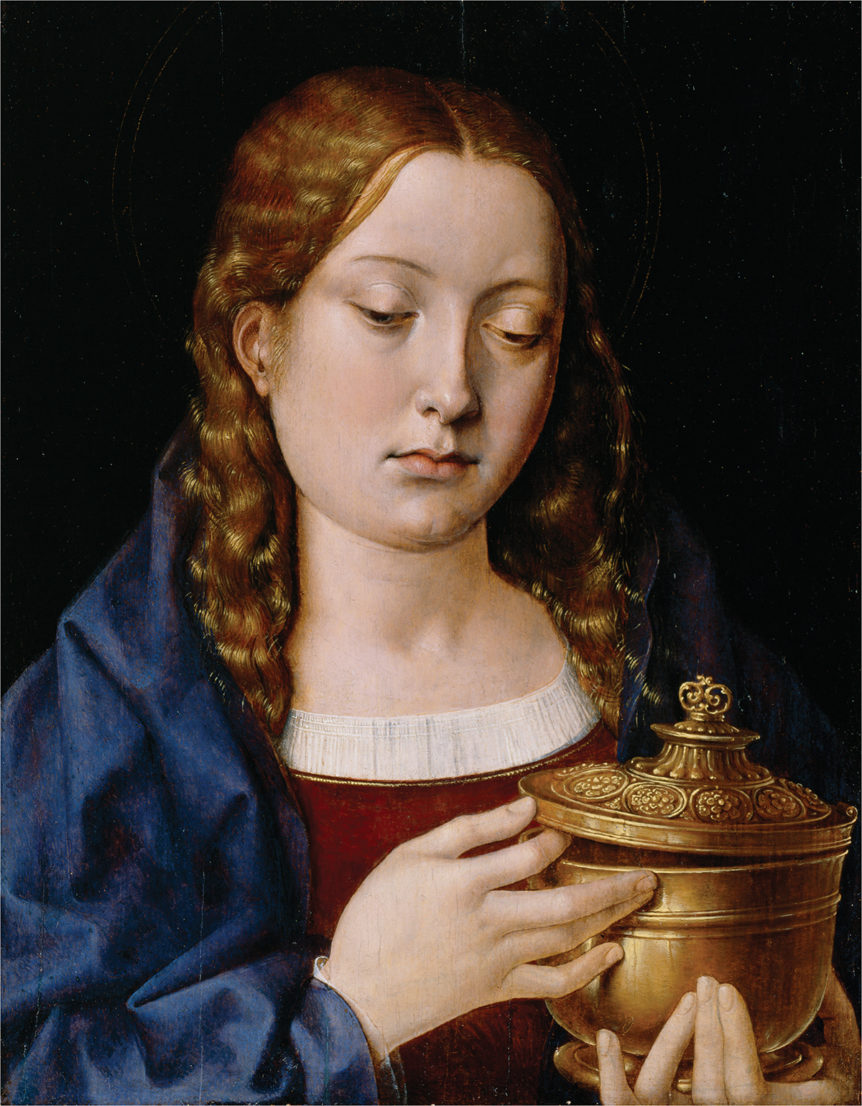 Fools, as we all know, rush in where angels fear to tread. It is in that spirit alone that a critic might approach the paintings of Michel Sittow, the improbable subject of a new exhibition at the National Gallery of Art in Washington, DC. Merrily mixing metaphors, let us say that any attempt to assess this master of the late fifteenth and early sixteenth centuries is like dancing in quicksand on a sinking ship in the midst of an earthquake. In all the world, there are two paintings that can be attributed with confidence to the artist, who may or may not be named Michel Sittow: the rest is conjecture predicated on those two foundational works, which are on view in Washington. Of the seventeen other works in the show ascribed to the artist, not a single attribution has won universal assent. Writing about them, one is acutely aware that any assessment of Sittow’s oeuvre may prove to be risibly wrong in the light of subsequent reattributions. 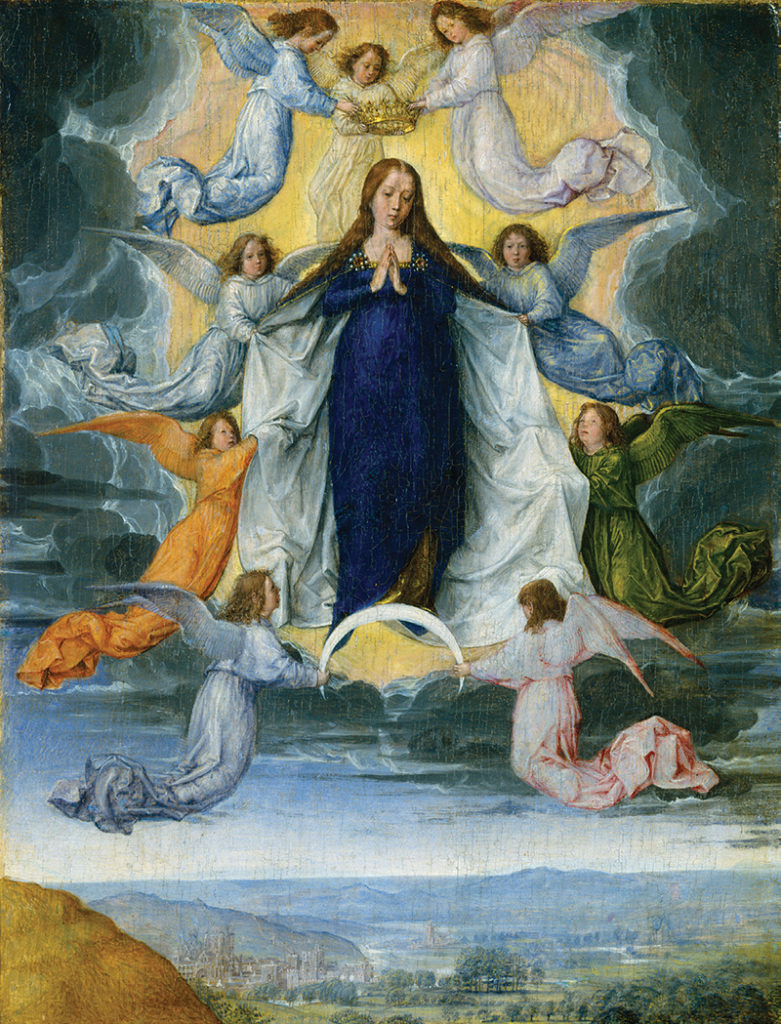 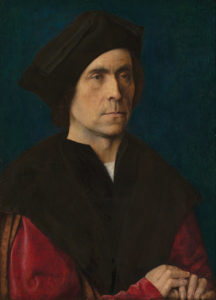 Fig. 4. Portrait of a Man attributed to Sittow, c. 1510. Oil on panel, 14 1/8 by 10 1/4 inches. Mauritshuis, The Hague, Netherlands, purchase made possible by the testamentary disposition of Mr. Volz and with the support of the Rembrandt Association; photograph by Margareta Svensson.

I recall that, somewhere in the large corpus of his writings, the early twentieth-century art historian Max J. Friedlaender, one of the first to shed light on Sittow’s career, made the excellent point that whenever we misattribute a painting, we do violence not to one artist, but to two. And in the present connection, there may be more victims before we’re done. 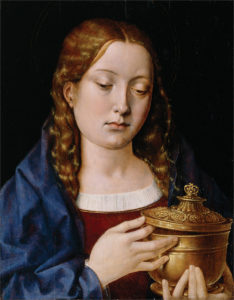 There are, however, two potent reasons why the attempt should be made. First, whoever painted the works in this exhibition (not counting one work apiece by Hans Memling, Juan de Flandes, and Jan Gossart) was an artist of rare ability, and whether we are talking about one artist or twenty, the art is of a very high order. Second, there is something transcendentally delightful in the fact that Michel Sittow was Estonian. The art of fifteenth-century Europe—beyond the two centers of Florence and Flanders—tends not to receive much attention outside of academic circles. True, there were a few excellent but relatively unsung masters in Provence and northern France, in Ferrara and Milan, in Nuremberg and Prague. But down to the end of the Old Masters tradition, the map of their activities rarely expands north of Amsterdam or east of Venice. In the present exhibition, we are transported to the distant north of Europe, to the frigid Baltic shores, where speakers of an ancient Finno-Ugric tongue were among the last European converts to Christianity. In terms of longitude and latitude, Sittow, a native of what is today Tallinn, is the northernmost Old Master anyone has ever heard of or cared about, and also the easternmost, with the exception of El Greco, from the island of Crete. 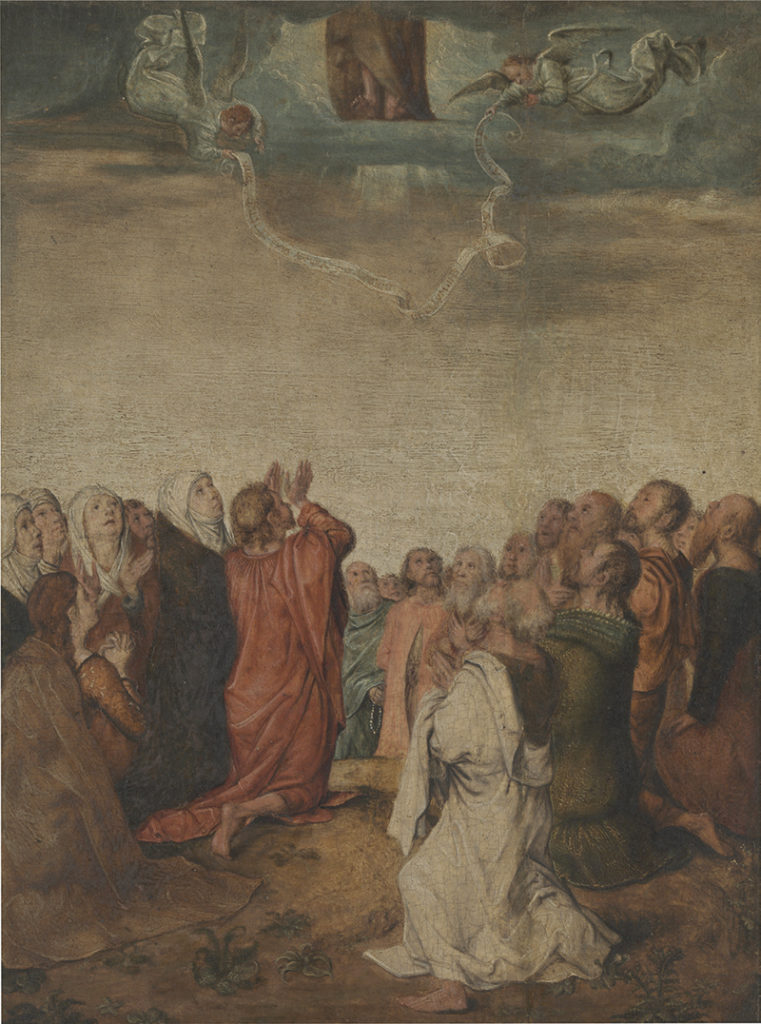 At the time of Sittow’s birth about 1469, Tallinn was the second-largest city in the territory of Livonia, comprising modern Estonia and Latvia. It had first been colonized and converted to Christianity by German and Danish knights largely associated with the Teutonic Order, starting only about two centuries before his birth. For the next two hundred years, control of the territory shifted between Germans and Scandinavians. Sittow’s first language was probably German, since his father, and probable first art teacher, was German, while his mother was of Swedish and Finnish descent. Having been born in Tallinn and dying there about fifty-six years later in 1525, Sittow nevertheless spent much of his career traveling. At a time when most people lived out their entire lives without straying more than thirty miles from where they were born, Sittow traversed the continent of Europe with an energy that seems impressive even in the jet age. After continuing his study of painting in Bruges, perhaps under Hans Memling, Sittow became court painter to Queen Isabella of Spain. He seems to have traveled from there to the Holy Roman Empire and to England, where he painted Mary Rose Tudor (Fig. 8), the sister of Henry VIII, and to Denmark, where he painted Christian II (Fig. 7). 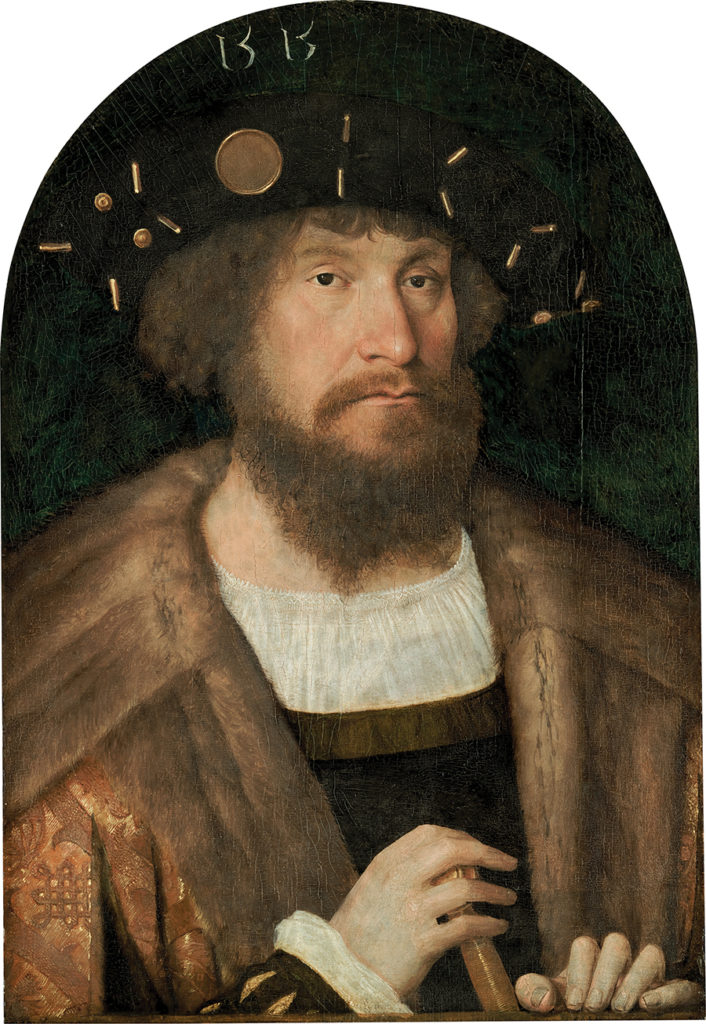 The two foundational attributions upon which our understanding of Sittow rests, and on which all subsequent attributions depend, are the diminutive panel paintings The Assumption of the Virgin (Fig. 3) and The Ascension of Christ (Fig. 6). These were part of an altarpiece commissioned by Isabella that was probably painted between about 1500 and 1504 and originally contained forty-seven panels. The Assumption of the Virgin, from the National Gallery’s own collection, is a work of stunning beauty. It reveals the influence of such Flemish masters as Gerard David in the jewel-like precision of the details, in the hieratic symmetry of the Virgin (robed in brilliant lapis lazuli) and her nine angelic companions, and in the skillful atmospheric perspective of the landscape at her feet. The Ascension of Christ is in a far inferior state of preservation, but it is an astonishingly advanced composition for a northern painter of the time. More than any other work attributed to Sittow, it reveals the influence of Italy. Other than the hands in Catherine of Aragon as the Magdalene (Fig. 5), from about ten years later, no other trace of Italy appears in the surviving work attributed to Sittow. Instead, for his religious art, he looks not only to the North but draws inspiration from painters and compositional patterns that would have been strikingly conservative by the first decades of the sixteenth century. Among these are Christ Carrying the Cross, now in the Pushkin State Museum of Fine Arts in Moscow, from about 1518 to 1525, and the nearly life-size figures in Saint James the Great and the Virgin and Child (Fig. 1) and Saint Adrian and Saint Anthony (Fig. 2), both from around 1520 and here attributed to “Michel Sittow and workshop.” His splendid Nativity at Night is ultimately based on a well-known work by Geertgen tot Sint Jans, possibly from around 1490, some thirty years earlier. 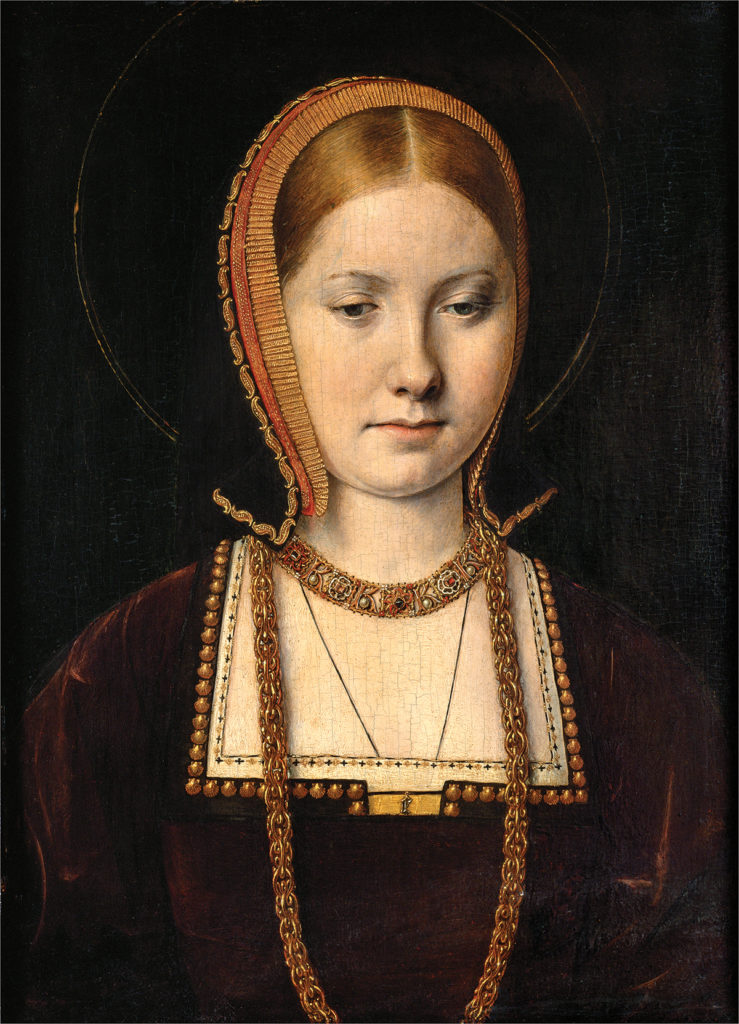 Whatever his achievements as a painter of religious subjects, Sittow is probably best known today as a portraitist. Here, attribution is especially tricky: other than a certain way of highlighting noses with white paint, these works have few obvious points in common. As with his religious works, Sittow’s portraits shift between a striking modernity and a just as striking formal conservatism. To take but two examples, first consider his Portrait of a Man from about 1510 (Fig. 4). With the sitter’s severe, compressed lips, his black cap and black shawl over a burgundy robe, and the position of his hands, the image harkens back to Rogier van der Weyden’s portraits from half a century before. But in his Portrait of Diego de Guevara (?) from five to eight years later (Fig. 10), we find a far more approachable subject. Almost unkempt in his abundant fur mantle, this man—whose identity is debated—has a brooding intensity, an immediacy and intimacy that recall the Venetian master Giorgione, at that time recently deceased. 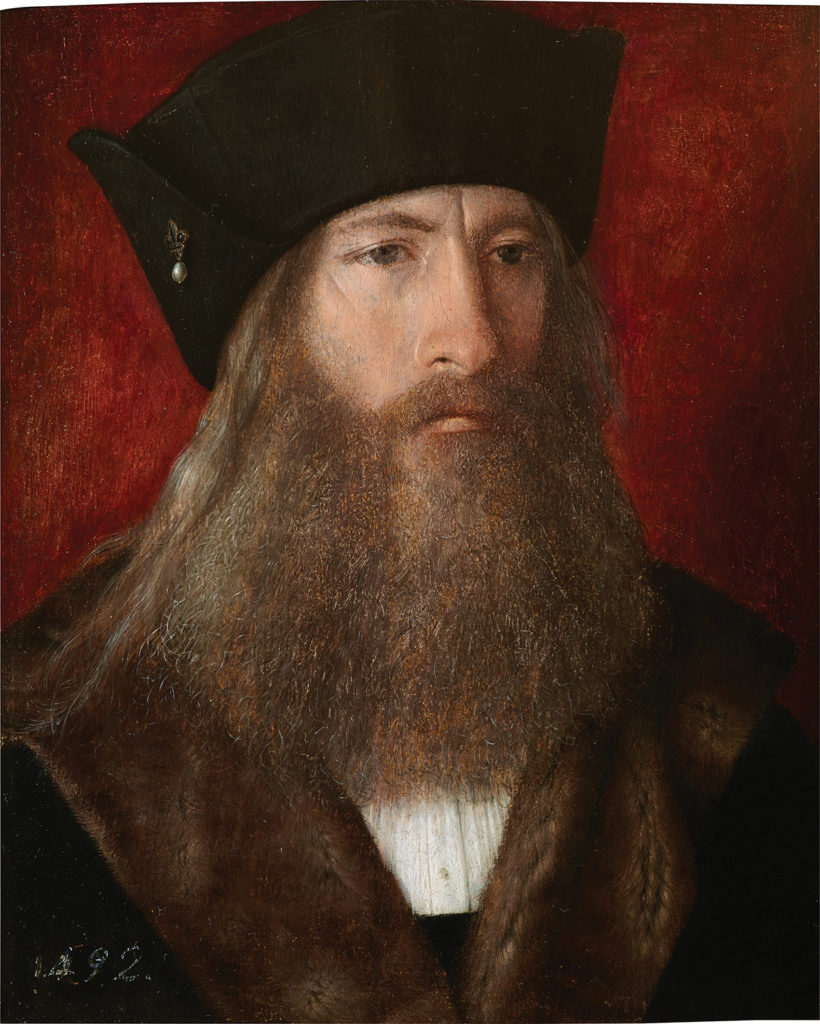 Sittow’s portraiture is a subtle thing, consisting of built-up layers of paint that impart a vivid, breathing translucency to the flesh. Its subtlety extends to the dominant mood: unlike the European portraiture of later generations, there is little overt expression and there are few props. The being in question emerges, as though momentarily, from darkness into light. His humanity stands revealed as in a chamber of total stillness and silence, sealed off from the external world. In the best late Gothic traditions of Flanders, Sittow’s registry of the raw data of a face is unflinching and uncannily exact, but somehow fully sympathetic to its subject. 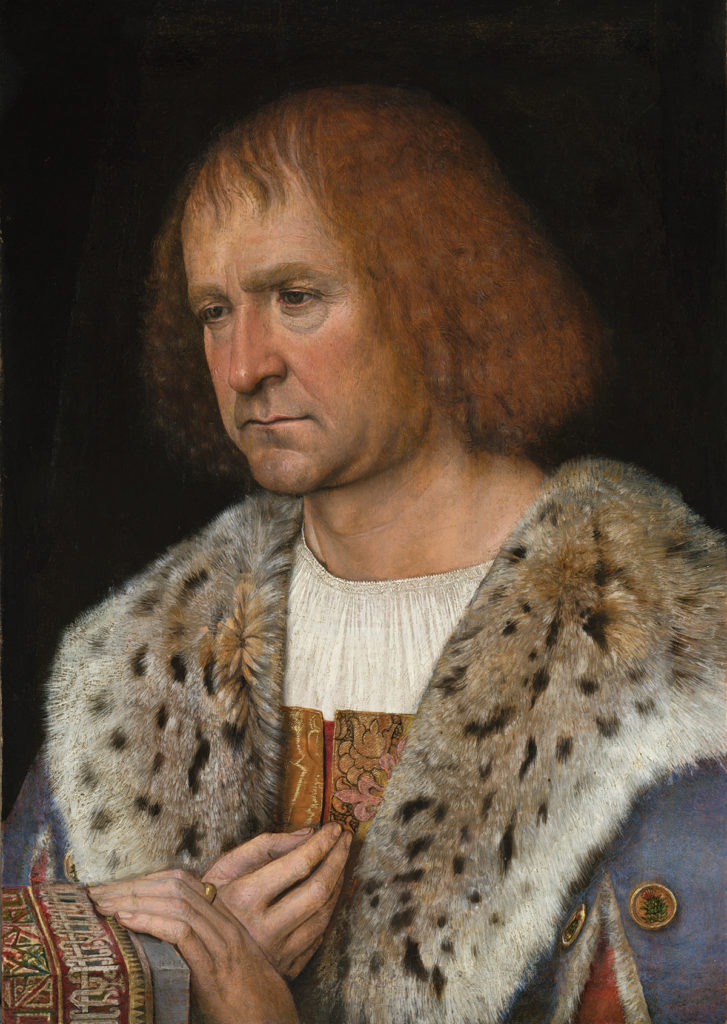 From a purely pictorial perspective, if there were any doubt that Sittow was a true artist, look no further than the perfectly painted medallion in the hat of the Danish King Christian II (Fig. 7) or the pearl in Portrait of a Man with the Pearl (Fig. 9). The latter work especially, with its splendidly bearded subject set against a plum-colored ground, is as expert in its details as in its overall conception. But whereas much of Sittow’s art consists in the expert reenactment of earlier formulae, these two acts of intensely individual initiative are all the proof we need, if we needed any proof, that Michel Sittow was a master of his art.

Michel Sittow: Estonian Painter at the Courts of Renaissance Europe is on view to May 13 at the National Gallery of Art, Washington, DC. It is accompanied by a scholarly catalogue of the same title.