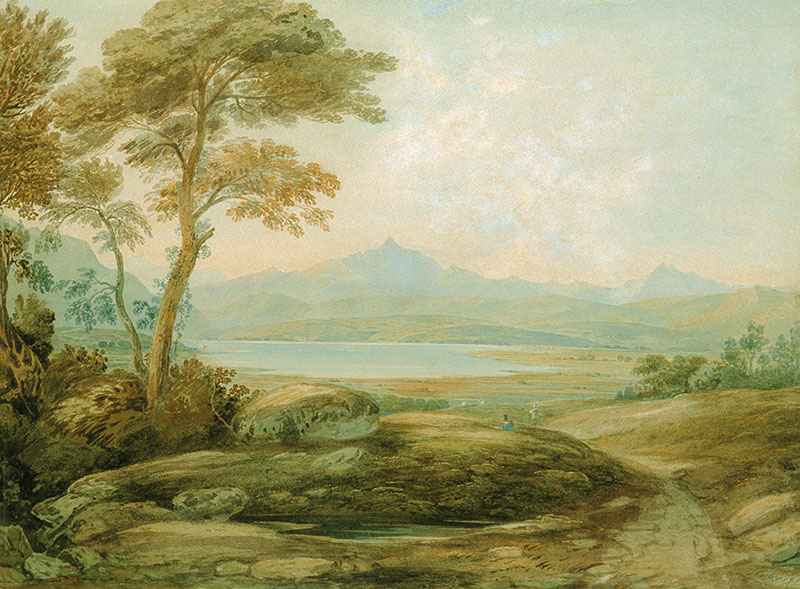 Rising up in the midst of the Charleston Historic District, what is today the Gibbes Museum of Art was founded in 1858 and has inhabited a sumptuous beaux-arts monument, inspired by the works of Andrea Palladio, since 1905. That noble structure, which reopened three years ago after a $13.5 million renovation, houses more than ten thousand works of art, as well as an inspired suite of special exhibitions. The latest of these is Luminous Landscapes: The Golden Age of British Watercolors. That golden age endured from the end of the eighteenth century to the middle years of the nineteenth, and within the rarefied world of watercolors, it counted such giants as John Varley, Paul Sandby, and David Cox the elder, all of whom figure prominently in the present show.

One of the minor, but not uninteresting, mysteries of art history is why exactly the English took to watercolors with such avidity that it came to define their art in a way it never defined the visual culture of Italy, Germany, or France, even though those nations surely had their own masters of the medium. Indeed, one might fairly assert that the principal achievement of Turner, perhaps the greatest of English painters, consisted of transposing to oils the aesthetics of the watercolor (in which medium as well he proved to be a master). Even today, David Hockney thinks like a watercolorist, whether he is painting in that medium or in oils.

Whatever the answer turns out to be, a good place to seek it is the works on view at the Gibbes, all of them from the collection that John Wigger bequeathed to the museum in 2004. There is nothing epic about these works: they are simple, humble effusions formed from an ethereal amalgam of water and pigment, and devoted, like a Chinese landscape painting or a Japanese poem, to some passing charm of the weather, or the curve of a hill, or the tilt of a willow tree. And that charm survives, with quiet but unabated force, two centuries on.