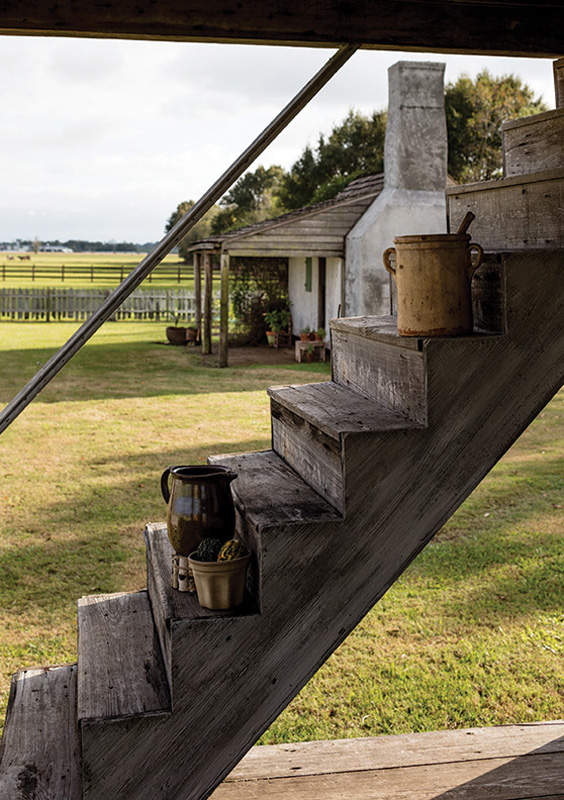 Over the past ten years Wade Lege has rescued some of the disappearing landmarks of his native Louisiana, beginning with a group of Acadian cottages and culminating in the ongoing restoration of a Greek revival house originally from Kismet plantation.

Wade Lege sold an early nineteenth-century armoire to pay for his architectural Moby Dick. With the proceeds, he got forty-five hundred square feet of fire-gutted Greek revival elegance—an antebellum survivor that might have been bulldozed if this obsessed Louisiana collector hadn’t come along with a flatbed truck, a moving crew, and a preservationist’s mania for the built legacy of his home state.

“You can’t live in an armoire, no matter how beautiful,” Lege says, reflecting on the purchase of his house in 2012. Without regret, he described his lost armoire, a rare Louisiana-made piece: “It was unusually small, built of cherry with cypress secondary wood, on cabriole legs with raised pedestals that suggested pieds-de-biche, and it had all the original brass hardware. I was glad to live with the piece, but my imagination was seized by this old Creole house. The building made me think of the West Indies, and New Orleans, and my own Cajun community. It reminded me that the cultures of all these places are knit together.”

Lege moved his 1840s Creole landmark, once part of Kismet plantation, into Southwest Louisiana—Cajun country—adding it to a suite of historic buildings that he has restored at a family property outside Abbeville. The compound isn’t a rich man’s folly. It’s more like an open-air trade school, where Lege, working hands-on, has taught himself the painstaking art of restoration, and shared those skills with a small cadre of local craftsmen.

He began modestly, in 2004, purchasing a tiny half-timbered farm cottage and moving it to the site. With its gable roof stretching over the open front porch, weathered cypress shingles, external stairs, and battened windows and doors, the four-room cottage could easily fit in an antebellum landscape by Richard Clague—an effect reinforced at sunset, when swallows swoop over the grassy property and a neighbor’s Charolais cattle begin to low.

“A lumber dealer turned me on to this place, telling me ‘I don’t have time to demolish it.’ The property owner wanted the land cleared to build a new house—now he’s still living in a trailer and I’m in this eighteenth-century cottage, living without a mortgage,” Lege says.

Demolishing old buildings became commonplace in Southwest Louisiana starting in the 1990s, as surging oil prices spurred a construction boom and vintage timber was sought for its decorative qualities. Especially prized was the old growth cypress that came out of the region’s swamps a century ago.

Lege saw many childhood landmarks disappear from the level, rice- and cane-growing country near Abbeville. And he became determined to save that legacy. He made a good start with the cottage, eventually adding a barn, a second house, a reproduction of an open-air kitchen, and other vernacular outbuildings. He dates his cottage to the 1790s based on the ax-hewn timbers found in the building’s two original rooms: “No one would go to that kind of trouble once milled lumber became available,” he argues.

Lege, forty, shares the cottage with girlfriend Anna Grand, two dogs, and an impressive group of antiques. Here the furnishings include a four-post walnut tester bed from 1840s Vicksburg; an 1820s plum-pudding mahogany armoire that likely came from Louisiana’s long-gone LaBranche Plantation; and, more in keeping with the cottage’s simple, vernacular style, a rough-hewn Biedermeier table that was made by nineteenth-century German craftsmen on the Texas frontier. “I like my big Creole house and fine antiques, but I also like primitive country things,” Lege says. “And I don’t mind getting my hands dirty.”

Lege roofed his buildings himself, stripped layers of paint and linoleum from old cypress planks and timbers, worked alongside masons and plasterers, and taught himself the traditional techniques of bousillage, so that he could restore plaster-skimmed walls made from an insulating mix of black moss and mud.

For his projects, he collected a stock of vintage lumber from farmyard woodpiles and scrapyards. He saved sheets of vintage glass, and discovered Louisiana’s last remaining dealer in pressed black moss—made from wild Spanish moss—a once common upholstery product around the state. “I needed to knock on lots of doors, stop at the roadside, talk to country people, and drive up private roads to find what I wanted. And sometimes I had to go back repeatedly,” he says.

The rough-hewn cypress picket fence that frames his compound was won through such persistence. For Lege, it was a perfect example of the disappearing local vernacular; for its previous owners, an elderly couple, the fence was a familiar part of the landscape, and simply not for sale. Lege continued to visit the couple from time to time. For five years, he sent annual letters with pictures of his evolving project. He rushed to the property, fearing the worst, when the fence was tem- porarily removed for a land-clearing project. Pushy? Perhaps. But if your name is Wade Lege, if you have a relaxed country manner, if your family is known in the neighborhood, and if you put preservation ahead of profit, you get the fence in the end.

New Orleans antiques dealer Jonathan Wells has seen Lege work his magic. “Wade will send me a text from a yard sale out in the country—a picture of a homespun blanket or a foot-stool. Then one thing leads to another and he ends up in the seller’s house or digging through the barn. It’s a talent. He has charisma. It’s almost as if the antiques want to find him, not the other way around.”

Lege’s first architectural purchases raised a few eyebrows, but nothing like the Kismet house, says childhood friend Josh Broussard, an antiques dealer who now helps to manage New Orleans Auction Galleries. “Wade sold valuable things to buy a heap of brick and fire damaged boards—that’s how some people viewed it,” Broussard says. “But I was there when he got Kismet: He cracked a bottle of champagne, warmed a quiche on the roof of the car, and played Hank Williams and opera on an old record player. From that moment, as we sat with our feet dangling in an open doorway, I knew that Wade had made the right decision.”

Once the Kismet house was moved, Lege sold more objects to finance the restoration, including a contemporaneous portrait of a Creole girl by Jacques Amans (1801–1888). When he found two Creole box mantels in nearby Evangeline Parish—a house was being dismantled for lumber—Lege resold them to pay for a period staircase from the same trove of building parts. The stairs now provide attic access at Kismet, blending elegantly with the enclosed second floor gallery. Lege also doubled the size of the job, raising Kismet on a historically accurate ground floor, an element of the original 1840s house that had disappeared when it was moved from the flood plain under a previous owner. “Collecting and accumulating are very different things,” Lege says. “If you buy a derelict, half-burned building, you need to put your heart and soul into it. Sometimes you need to make sacrifices, because you can’t go to the bank to borrow money against it. Once I bought it, I knew there was no going back.”

Trading in antiques comes naturally to Lege. He started after high school, and soon became known around Abbeville for his persistence, and his ability to turn up remarkable objects in unlikely settings. He went to country auctions and stopped at every yard sale. He got to know Robert E. Smith, an antiquaire who divides his time between France and an 1821 house in Breaux Bridge, Louisiana.

“I grew up in a slab house with a swimming pool that was built the year I was born. But that didn’t limit me, because I’ve always gotten love and support from my family,” Lege says. “As a kid, I would open the encyclopedia and look at pictures from around the world—and that blew my mind. It started my passion for history. It stoked my imagination. It got me window shopping at French Quarter antiques shops when my family drove into New Orleans for football games.”

After Hurricane Katrina, Lege’s travels took him back to New Orleans, where he worked with a restoration contractor. He also came under the wing of Don Didier, the legendary antiquarian who restored Pitot House (1799) and other Crescent City landmarks. The feisty Didier helped to put southern antiques on the map for skeptical scholars and dealers from outside the region. “Don taught me to look instead of talking. He insisted on real scholarship—reading the books, studying the history, observing every aspect of material culture, not just the pretty pieces,” Lege says. “If you don’t understand the joinery of a country table, you’ll never be able to rebuild an old house.”

At Didier’s home, Lege recently spotted a pair of paint-encrusted French doors leaning against a magnolia tree—salvaged from Juicy’s, a funky neighborhood bar that had long operated from a two-story nineteenth-century warehouse nearby. “Don had admired those doors for twenty years, and when the building was demolished he rescued them from the curb before they went into a dumpster,” Lege says. “He saw what I did: They were old and beautifully made, and a perfect example of period woodworking, with hinged panels to let in air and light. It turned out that they were an exact fit for a doorway at Kismet.”

“In the end, it comes down to taste. You can do your research, but if you don’t have an eye, you’re in trouble,” Lege says. “To hone your eye, you have to learn from experience, make mistakes, keep an open mind — and you have to hang around with people who know.”

Lately, however, Lege has been with his building crew almost exclusively: up at dawn, crashing at sundown, with a pause for a jobsite lunch on a stone-topped baker’s table decorated with a single bottle of Tabasco. “People sometimes ask why I do this,” Lege says. “They ask about money, and I tell them that saving old objects is a way to understand my culture and myself. There are much easier ways to make a living. I could be running a few rental properties in Lafayette, for example.” With a laugh, he continues, evoking the catechism: “Where did I come from? How did I get here? I’m always asking big questions—and those questions have got me into trouble. I need to finish this project. I don’t need any more talk about scale and detail. I don’t need to pound one more nail. To restore Kismet, I had to be a romantic, but please don’t paint me as an architectural tree-hugger. I’m a fan of air conditioning. I love Louis Kahn’s modernist capitol for Bangladesh. I live in the present, but right now this old building is in charge of me, and I have to do right by it.”