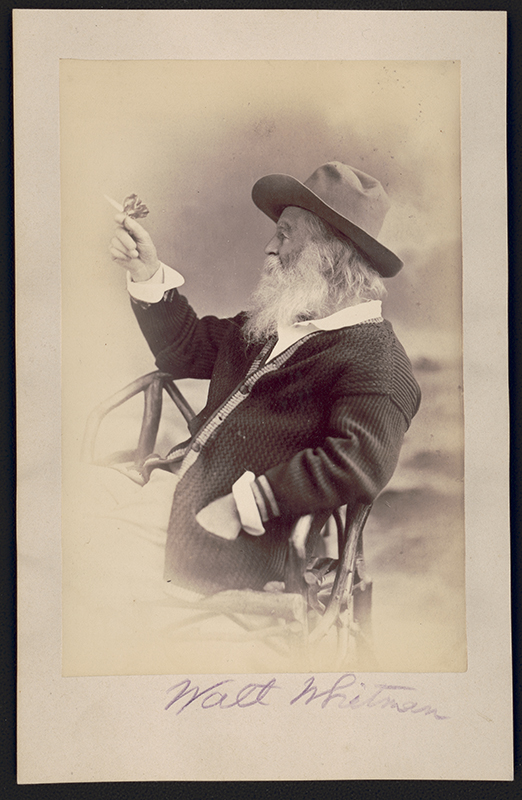 Three New York cultural institutions—the New York Public Library, the Grolier Club, and the Morgan Library and Museum—as well as the Library of Congress, are putting on summer exhibitions to honor the poet of democracy, empathy, and “the body electric.” Although his protean and contrarian spirit seems ill-suited to the confines of museum vitrines, it’s hard to resist the excitement of seeing so much of his plain but elegant handwriting with the crown of w’s in the signature Walt Whitman, or the miscellaneous assembled materials that were witness to his outsized life.

These include the notebook with trial lines for Leaves of Grass at the Morgan and his annotated edition of The Complete Works of Robert Burns at the Grolier Club. The extensive Grolier exhibit also has every edition of Leaves of Grass published during his lifetime and an array of relics, like the pressed horse chestnut and sassafras leaves he left between the pages of a book, a blackthorn cane with an engraved silver tipped handle, and a pair of Victorian rings encasing locks of his hair.

At the New York Public Library and at the Library of Congress, you can see Whitman’s 1863 handwritten “Hospital Notes,” explaining his voluntary work, writing letters for wounded soldiers who often couldn’t write or “don’t want to worry the folks at home—the facts are too sad to tell.” All the exhibits present mementoes of Whitman’s intimate relationship with Peter Doyle, the young tram conductor—his “rebel soldier friend”—he met in 1865.

Whitman is regarded as the most photographed literary figure in the nineteenth century—more than 130 portraits are known to exist. The Morgan Library is showcasing the famous three-quarter image of the poet in profile with his felt hat and fluffy white beard, a delicate butterfly balancing on his index finger. The butterfly itself is on view as well—a mass-produced cardboard Easter promotion—evidence, as Whitman put it, of the way “All forces have been steadily employ’d to complete and delight me.”