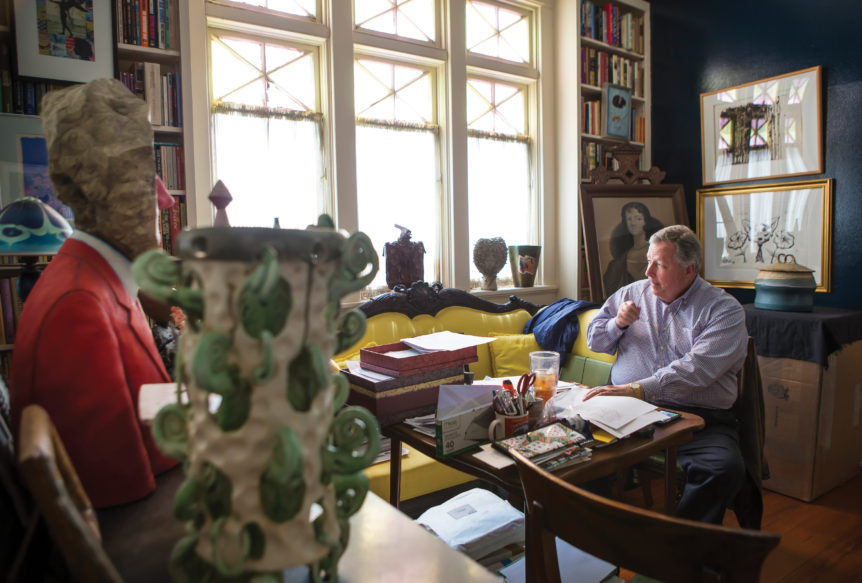 John Bullard among his ceramics collection in his New Orleans home, holding Jug with Female and Male Torsos by Erik Gronborg (1931–), c. 1968.

If Marcel Duchamp was right to call art “a habit-forming drug,” then E. John Bullard was a benevolent pusher for thirty-seven years, encouraging the cravings of collectors while serving as director of the New Orleans Museum of Art. It was only when he retired in 2010 that Bullard got hooked on art collecting himself. The seventy-four-year-old connoisseur has become an avid—even insatiable—buyer of studio ceramics by Peter Voulkos, Beatrice Wood, John Glick, Betty Woodman, F. Carlton Ball, Marguerite Wildenhain, and hundreds of others who helped make clay an important part of the American art scene in the half-century after World War II.

Bullard assembled most of his trove—430 works by 230 artists—over the past three years, and he doesn’t plan on stopping. “I saw a huge opportunity,” he says. “Prices had fallen dramatically after the 1990s, even for major figures, so I could do more than buy a few pretty pots for the mantel. I could think about creating a picture of an entire era, buying multiple works by individual artists, and including objects that might not fit my personal taste, but were important to the history of the medium.”

Platter by John Glick (1938–2017), produced by Plum Tree Pottery, 1994. Stoneware, polychrome glazed; diameter 22, height 4 inches. John Glick built a national reputation for functional, thrown stoneware, produced at Plum Tree Pottery. His work is celebrated for its rich, painterly surfaces. Change the light and Glick’s pieces reveal multilayered depths and fresh colors, often rivaling the atmospheric subtleties of a well-made oil painting. Glick argued that his platters, bowls, covered jars, and decorative panels were enriched by their social function in homes and at dinner tables—and his productivity insured that the work was affordable. In the course of fifty years, he made some three hundred thousand pieces with the aid of assistants.

Bullard’s hunt began with a casual stop at Cronin & Murphy Fine Art, a gallery near his summer home on Deer Island, Maine. It continued on eBay, and expanded to galleries such as the Nevica Project in Chicago and Jeffrey Spahn in Berkeley, California. He found key works at major auction houses, but also turned to smaller, craft-friendly outfits such as Chicago’s Treadway Toomey Auctions, Rago Arts and Auction Center in New Jersey, and Los Angeles Modern Auctions.

Bullard’s passion for ceramics wasn’t entirely surprising. At NOMA he had championed a major expansion of the museum’s decorative arts holdings, which came to include a comprehensive survey of arts and crafts pottery as well as Meissen porcelain and ancient Chinese ceramics. In Japan, he met many contemporary ceramic artists while traveling with Kurt A. Gitter, a prominent Asian art collector from New Orleans. Bullard’s interest in American studio ceramics was further stoked during nine years as a board member at the Haystack Mountain School of Crafts in Maine. “I had accumulated a few pots—about forty—and had met a lot of artists through Haystack,” he says. “One day, I looked around and decided that I might have the beginnings of a collection. That’s when I stopped at Jim Murphy’s gallery and started my real education. The process broadened my outlook, and turned me into a detective, searching out links between artists all over the country.” Bullard’s treasures are bound for NOMA, where he is director emeritus. The museum will highlight his gift with an exhibition, Personalities in Clay: American Studio Ceramics from the E. John Bullard Collection, which opens in November.

His holdings show the range of American studio ceramics—sometimes in the career of a single artist. One key piece, Big Ed, is a stacked stoneware sculpture by Peter Voulkos, a culminating work, made in 1994, that shows how he translated the expressionist style of New York action painting into ceramic sculptures with the sublime rawness of geologic formations. But Bullard’s collection also looks back to the beginnings of Voulkos’s career. It includes a voluptuous lidded vessel from 1952—the kind of work that earned Voulkos praise from traditionalists who admired his impeccable proportions and wax-resist surface designs.

Such contrasts abound in Bullard’s collection. It makes room for Asian-influenced functional work by Warren MacKenzie, but also includes a circus-themed figurative sculpture by Beatrice Wood—a New York Dada participant who later gained fame for her lusterware. It showcases Laura Andreson’s vigorous natural forms and experimental glazes, and puts her vessels in a broader context, alongside sturdy salt-glazed pots by Karen Karnes, Val Cushing’s influential ceramics, and the cheeky and colorful sculptures of Patti Warashina, who brought a feminist sensibility to the macho Funk art movement of the 1960s and ’70s. Bullard’s collection also illuminates the European strain in American ceramics, showcasing both the Bauhaus-trained Marguerite Wildenhain, who taught generations of California makers at a studio deep in the redwoods; and Austrian emigrés Gertrud and Otto Natzler, whose thin-walled, elegant vessels exemplify the stylish modernism of postwar Los Angeles.

Artists with California connections dominate Bullard’s collection, reflecting the state’s seminal role in the studio movement—and the collector’s Golden State roots. “I grew up in L.A ., so I saw work by the Natzlers at Bullock’s Wilshire [department store] when my mother shopped there in the 1950s. And I remember a school trip to Beatrice Wood’s studio in Ojai—though I was most impressed by how exotic she seemed, sweeping around the place in her sari and clinking bangles,” Bullard says. As an undergraduate at UCLA in the early 1960s, Bullard also saw shows by Voulkos, Ken Price, John Mason, and other pioneering ceramic sculptors, both at museums and at avant-garde outposts such as Ferus Gallery. “There was lots of energy in Southern California—and a lot of pride about setting a direction for artists across the country,” he says. “It was hard to miss the essential role of ceramics.”

Tall Vessel with Standing Female Nudes by F. Carlton Ball (1911–1992) with sgraffito decoration by Aaron Bohrod (1907–1992), c. 1951. Stoneware, brown glaze with sgraffito; height 22, diameter 10 inches. F. Carlton Ball spread the gospel of studio ceramics across America while moving between teaching appointments, transmitting both the experimental outlook of Glen Lukens, who taught him at USC in the 1930s, and the throwing skills of Bauhaus-trained potter Wildenhain. Ball’s frequent collaborations made waves among purists: studio potters were supposed to control every aspect of the process— unlike their brethren in commercial potteries. Instead, Ball worked on decorative treatments with his wife, Kathryn Uhl Ball, and with American scene painter Aaron Bohrod, whose elegant incised drawings appear on the vessel in Bullard’s collection.

When Bullard shows off his pots, it’s easy to picture postwar California: a place where handmade ceramics were hailed as part of the state’s distinctive design aesthetic; where the potter’s wheel ranked with Beat poetry, bebop, and Zen Buddhist texts in the public imagination; and where countless discharged soldiers flooded university art departments to make their mark in clay. Even if California wasn’t the only source of the studio ceramics movement—and Bullard would be the first to make that clear—the intensity of the West Coast scene must have been obvious even to big-name, international visitors such as Bernard Leach and Shoji Hamada. On their celebrated 1952 tour of America, the two potters drew a crowd of more than a thousand to a Los Angeles hall as they spread their message of cultural authenticity and craft traditions.

Pillow Pitcher by Betty Woodman (1930–), c. 1983. Earthenware, polychrome glazed; height 13 ¾, width 26, depth 16 inches. Woodman sidesteps the tired questions about ceramics: Is it art or craft? Is functionality a virtue? The Pillow Pitcher in Bullard’s collection is a good example of her work. Too large to serve as a practical vessel, this boldly colored earthenware sculpture seems made for a ritual—one that moves domestic concerns and feminist thinking to center stage. It wouldn’t look out of place among Tang dynasty tomb figures or alongside work by Robert Kushner, Joyce Kozloff, and other artists who, with Woodman, helped launch the Pattern and Decoration art movement in New York in the late 1970s.

For Mel Buchanan, NOMA’s RosaMary Curator of Decorative Arts and Design, Bullard’s swift, decisive approach to collecting has been inspiring. “This is much more than a retirement project for John. It’s amazing to hear his passion and his encyclopedic knowledge about individual pieces and artists,” she says. “It just comes pouring out of him—he knows the geography, the friendships, and who studied with who back in 1971, but he also knows the pieces from handling them. He appreciates their tactile qualities. And he trusts his instincts. His collection isn’t just about visionaries and breakthroughs. It fills in the gaps, just like a good museum collection.”

Bullard’s obsession has transformed his modest New Orleans home. On a recent visit, the front door was obstructed by large wooden shipping crates, and it opened onto rooms where floors, window ledges, chairs, and tables were crowded with acquisitions. In one corner, hundreds of catalogues and books signaled the depth of his research into studio ceramics, and even those stacks were topped with additional vessels.

The situation is much the same at Bullard’s summer residence, says dealer Jim Murphy. “I’ve been in the business for forty years, and have never encountered someone like John before. Most people would need a lifetime to assemble this kind of collection,” Murphy says. “When I visit his house, I don’t think about his modest budget. I think about the fresh context he creates for every piece that I’ve sold him. I end up staying for hours, hefting pots, and watching them change with the light. Our joke is that he lets me come over and dust his pieces, but I always leave inspired.”