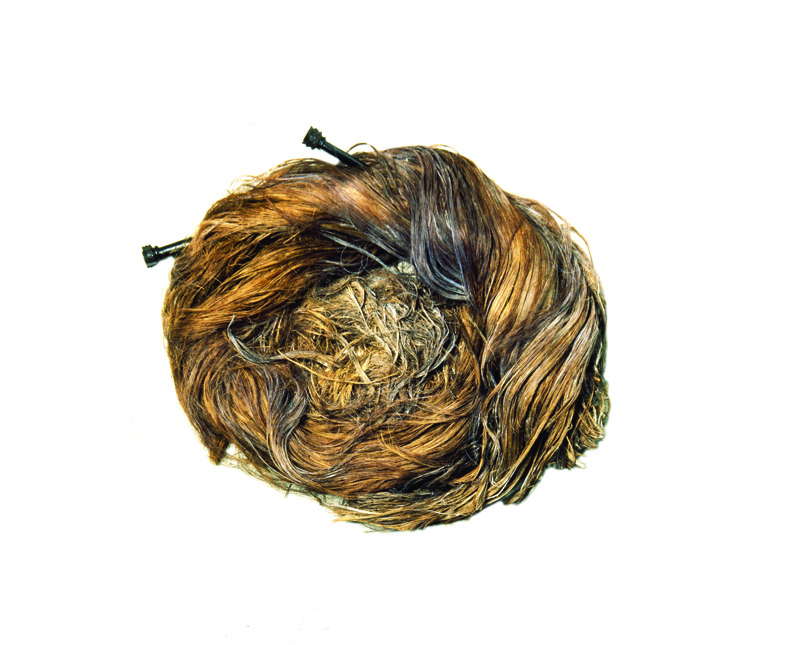 It all started with a hair bun. The date was April 17, by which time most of Europe and America were a month into pandemic-prompted lockdown. Museums worldwide were closed, and facing staggering income shortfalls. They were also starting to think about how they might keep in touch with the public. And so it came to pass that the digital and communications team at the York Museum Trust put up the following Twitter post:

Today’s theme, chosen by you, is #CreepiestObject! We’re kicking things
off with this 3rd/4th century hair bun
from the burial of a #Roman lady, still
with the jet pins in place…

CAN YOU BEAT IT?

It was an inspired moment. The tweet went viral, reposted more than five thousand times. Museums around the world began posting their own unsettling artifacts, among them a bat in a bottle, Victorian hair jewelry, a doll with a melted face, even a bracelet made of goat toenails. The press loved it. Creepiest Object got coverage from the BBC and CNN. Hyperallergic provided a gleeful rundown of the ghastliest entries, with the warning “this article includes images that you will not be able to unsee.” For the trust—which manages five venues in York, an ancient city in northern England—it was a public relations victory snatched from the jaws of institutional crisis. They’d had to furlough fully 80 percent of their staff to survive, leaving only ten people in place. Yet Millie Carroll, the trust’s digital communications officer, was working furiously to keep up public interest. Likes can’t replace core funding. But it was still a welcome development at a most unwelcome time.

One of the other staff members at the York Museums Trust who is still working is Lee Clark, head of communications. He was kind enough to share with me his thoughts about this runaway success. What did it suggest about the way his museum—and museums in general—was responding to the Covid-19 quarantine? “Social media is one of the few ways we can still reach audiences,” he replied. And while the sensationalistic tone of a Twitter throwdown is obviously quite different from a museum’s onsite communication style, the initiative did draw on the traditional strengths of the organization, with curators collaborating with the digital team to develop content. “By bringing these different skill sets
together to work collaboratively, we’re able to think about our collections, audiences, and engagement techniques in different ways,” Clark says, “hopefully learning lessons for new ways of working in the future.”

From this perspective, the idea of the Curator Battle was more than just a lighthearted gesture; it was a well-timed invitation to virtual conversation. With buildings closed to all but essential security personnel, museums are turning to online platforms—not only social media, but also Zoom “webinars” and online interviews, virtual tours, and other offerings—to continue their work. It will be fascinating to see whether, post-Covid, museums revert to the status quo ante. Perhaps the public will simply rush back to galleries with a flood of relief. But given the inevitably gradual nature of reopening, the new audience that has been established for online content, and the relative cheapness of that content’s delivery, it does seem likely that there will be a permanent shift. “Museums ignore digital at their peril,” Clark says. That has been true for a while now, but they’ll need to raise their game considerably in the years to come.

Seen in this light, York’s #CreepiestObject is more than just a curiosity. No doubt it caught on partly because of the theme’s implicit topicality, at a time of widespread anxiety (one of the most popular entries in the thread was a historic plague doctor’s mask). Yet the phenomenon is just one example of the way that museum collections are being rethought on the fly, little unnoticed by official cultural gatekeepers. In this dynamic online landscape, connoisseurship is not nearly as important as a sense of humor, lightness of touch, even a taste for the bizarre. Traditional qualitative hierarchies simply can’t compete.

A case in point is the Museum of English Rural Life, in Reading, a tiny specialist institution that, seemingly inexplicably, has more than 150,000 Twitter followers. This astonishing statistic is thanks largely to the work of Adam Koszary, who fashioned the institutional account (@TheMERL) into a uniquely addictive blend of countryside arcana and comical absurdism. A breakthrough moment came in April 2018, when he sent out an archival photo of an amply proportioned sheep with the simple caption, “look at this absolute unit.” It’s been retweeted nearly thirty thousand times.

After his post about the sheep (in fact, an aged Exmoor Horn ram) went viral, he realized he had to exploit the moment for all it was worth. He rooted around in the MERL collection for intriguing material, and teased his rapidly expanding audience with knowingly self-referential jokes and follow-ups. (My favorite is another sheep photo, poetically captioned, “i wandered lonely as a cloud.”) It worked brilliantly, making Koszary something of a guru; he recently moved to the august Royal Academy. He has commented perceptively about his role as a digital museums pioneer:  “Museums often struggle with the tension of trying to engage people while remaining respectable. But social media has pushed the envelope of what people consider respectable. . . . Writing in a friendly and humorous way doesn’t destroy the museum, and it’s simply one of the ways we reach our end goal: involving everyone in our heritage.”

Clark makes a similar observation, describing the #CreepiestObject challenge as a kind of hook that might draw people into a deeper exploration of museums and their collections. He notes that there are all sorts of reasons something might seem “creepy”: “Some simply because they have aged or decayed. Others are only creepy to modern eyes because they are out of context with the time or culture in which they were created. But all create intrigue and hopefully a desire to learn more about where the object is from and who created it.”

At its worst, social media can be the shallowest of pools. But it can also be a route into deeper engagement, a way to encourage people to value and protect heritage-based institutions, which are currently more endangered than at any time in recent memory. The complexity of the situation lies in the fact that these two sides of online content are interdependent. To reach a broad audience, social media needs to move fast. Posts can’t be burdened down with too much information, or even seriousness of intent. Yet it’s only worthwhile if it reminds people of the slow, patient, and essential work of caring for a collection.

At a time of unprecedented stress, when the online audience is the only audience there is, museum professionals are trying to strike that balance. The folks up in York know this as well as anyone. At time of writing, they had just launched another theme in the Curator Battle, this time for Best Hat—and it was giving Creepiest Object a run for its money.