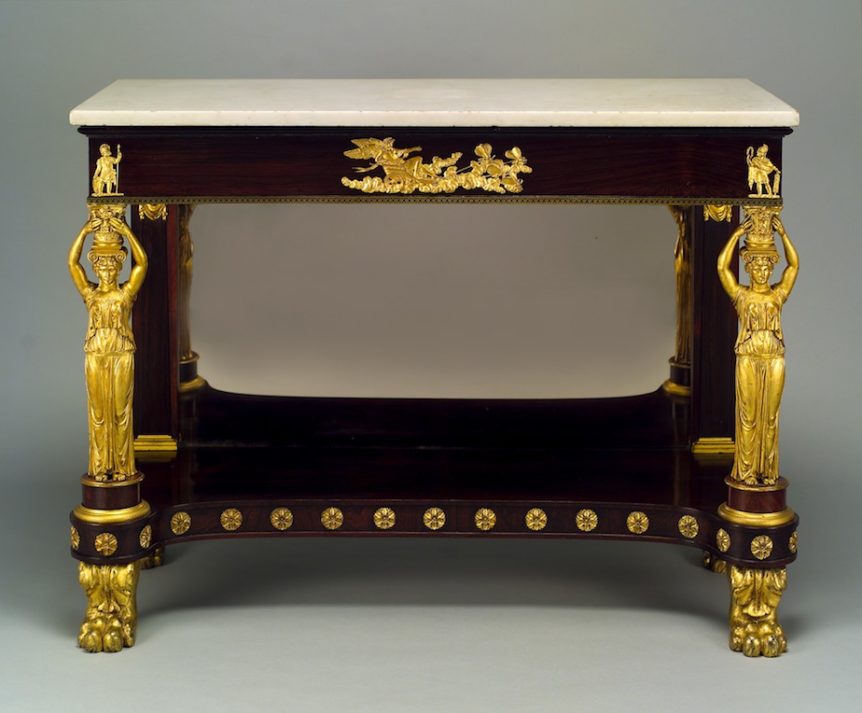 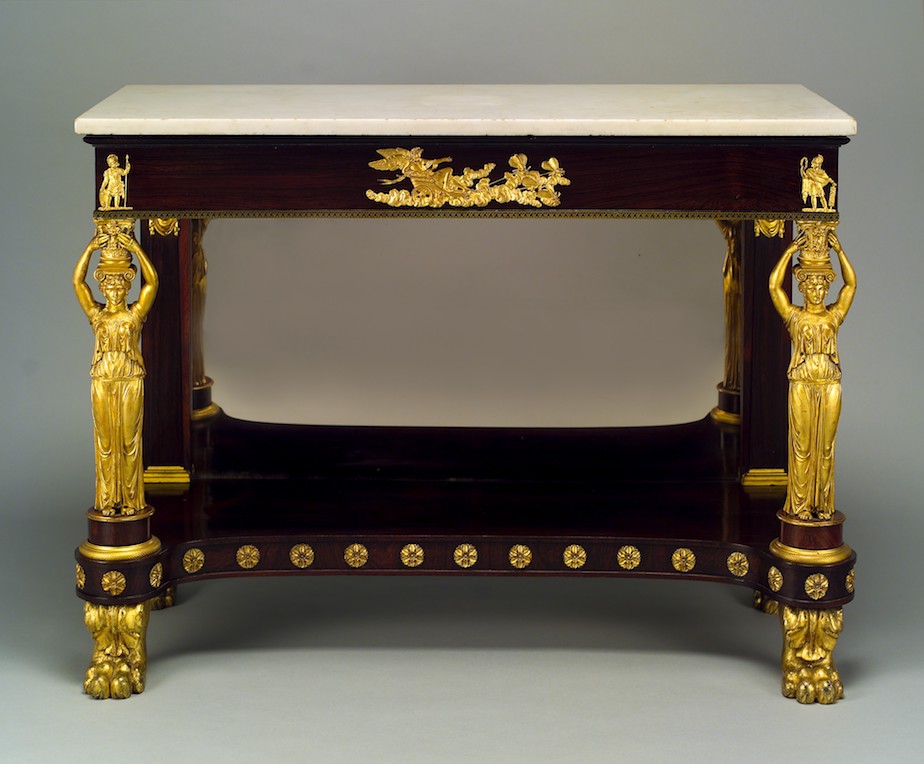 “Me too.” In the past few months, these two short words have acquired tremendous political weight. Women nationwide have stepped forward to offer personal accounts of sexual harassment, exposing male celebrities, politicians, and journalists as serial predators. Nor is this only a mass-media phenomenon. If you live in America, you probably know at least one woman who has courageously described their personal experience of abuse on social media, using #metoo. We are seeing a long overdue reckoning with just how deep sexism runs in our culture.1

At this decisive moment, every organization should be considering its relationship to gender bias. The Magazine ANTIQUES is no exception. True, there have been no harassment charges against individuals in our field, though Knight Landesman, the disgraced publisher of Artforum, comes close. Certainly, there are historical figures relevant to this publication who are known to have committed abusive acts, of whom the British carver and sculptor Eric Gill is the most notorious example.2 Yet to focus narrowly on the bad behavior of a few would itself be a mistake. For more generally, our field reflects the inheritance of patriarchy in ways that are rarely acknowledged.

As the historian Catherine Whalen has explained, the formative years of American art scholarship were “deeply rooted [in] ideologies of gender.”3 Women in the field often worked behind the scenes to give shape to museum displays, with the results credited to men; the “asymmetrical intellectual partnership” of Florence and Charles Montgomery at Winterthur and Yale University is one prominent example.4 When female art historians did find professional success, it was often in a field such as textile history, a subject thought appropriate to ladies. Meanwhile the Walpole Society, an elite group of curators, academics, and collectors devoted to the study of Americana, was founded in 1909 in Boston as an all-male club; it remains so to this day.5

There has been progress elsewhere, to be sure. Women, previously relegated to the docent corps in many museums, now make up the majority of the curatorial ranks, about 70 percent nationwide (though ethnic diversity remains a serious challenge).6 But the sector remains skewed at the top. A recent study shows that women are still under-represented in the leadership of large museums, and, on average, female directors earn only 73 cents for every dollar earned by their male colleagues.7

Then there are the historic objects under our care, which are hardly gender-neutral. Clearly, this is a big topic; just to itemize the sexist imagery endemic in decorative art would be a study in itself. To cite one example, a commonplace motif—drawn originally from rococo prints and paintings—shows generic “lovers” depicted in an attitude of struggle. A punch bowl probably made by the Herculaneum Pottery in Liverpool, now in the Victoria and Albert Museum, is typical of the genre: a gentleman seems to force himself on a young lady, who draws away in protest. Such stereotypical scenes reinforced the expectation that men persist, and women resist (then capitulate). There is a direct line to be drawn from a punch bowl like this to Harvey Weinstein’s hotel room. 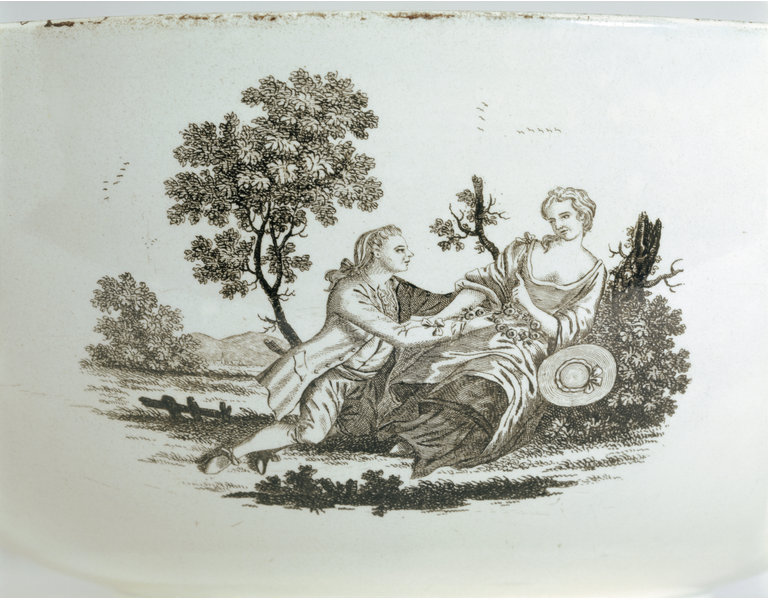 Or consider the caryatid: a female figure acting literally as a prop. The motif descends from ancient Greek architecture, most famously the Erechtheion on the Acropolis, and is quoted on neoclassical objects such as a pier table by Charles-Honoré Lannuier, now in the Metropolitan Museum of Art. There are many variations, often bare-breasted, sometimes hybridized with animal forms. Admittedly, male figures do appear as caryatids, yet the great majority are female, and this is in keeping with their original source, at least according to Vitruvius. In De Architectura, he wrote that the earliest human columns represented the women of Caryae, a city that had sided with the Persians against other Greek city-states during the invasion of 480 BC. “To ensure that they exhibited a permanent picture of slavery,” Vitruvius wrote, architects “designed images of them specially placed to uphold a load, so a well-known punishment of the Caryates’ wrongdoing might be handed down to posterity.”8

This ancient narrative of enslavement is of course lost on audiences at the Met today. Perhaps even in the more classically literate times of the early nineteenth century, it would not have been understood as part of the pier table’s explicit content. But it is tacitness itself that is the issue. Gender bias is not to be found in any one object, institution, image, or historical period. It is pervasive. The British writer Marina Warner made this point beautifully, back in 1986: “Our first thought when seeing a man on a pedestal in a public place is not ‘What does he represent?’ but ‘Who is he?’ The individuality of the male image and the idealized generality of the female divide our perceptions as if naturally, until the convention and all its premises become invisible.”9

We must question this invisibility. And as specialists in fine and decorative art, we have plenty of motivation to do so. Contemporary visitors to the American Wing might well find Lannuier’s caryatids bizarre and offensive; indeed, they should. We need to start forthrightly addressing such things. This emphatically does not mean removing such sexist and stereotypical imagery from our museums. As I argued in a previous column concerning the debate over Confederate monuments, erasing history is never a good solution. On the contrary, if the current challenges to patriarchy are to produce lasting positive change, it will be through further acts of acknowledgement, where once there was silence.

There are excellent models to follow here: pretty much anything by the late, great feminist art historian Linda Nochlin; analyses of the“gendered object” by Pat Kirkham and of stereotyping in design by Penny Sparke; studies of female consumption patterns by Barbara McLean Ward and Ann Smart Martin; and Laurel Thatcher Ulrich’s important book The Age of Homespun, which offers several compelling case studies on women and material culture.10 Why not rethink museum galleries, and indeed private collections, to reflect such scholarship?

The decorative arts field—precisely because it has long been a domain of genteel propriety—can apply the insights of feminism to particularly transformative effect. For generations, our museums (and, indeed, this magazine) have often presented a static picture in which well-bred women, servants, and furnishings alike sit quietly and patiently, contributing to a courteous elegance. It is time to tell a different story, one that frankly recognizes the discrimination women in the past have faced, in the hopes that women in the future won’t have to.