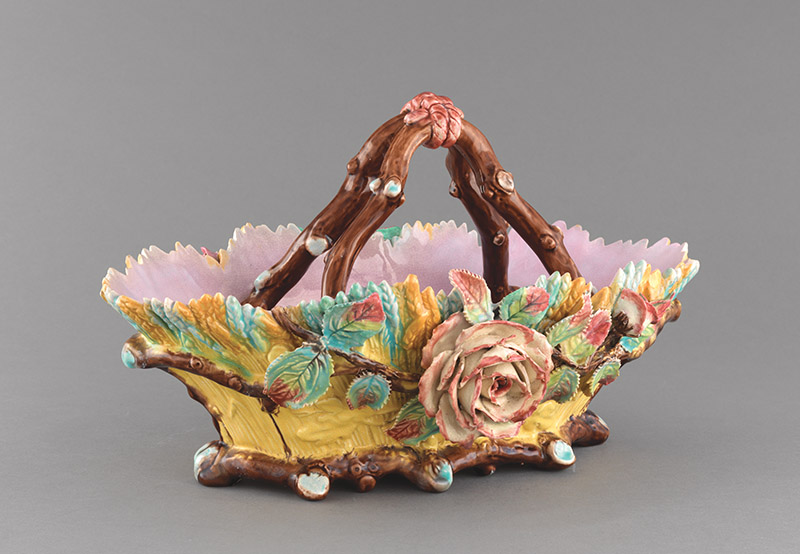 Last year, in the closing days of the Before Times, we put the finishing touches on a cover story devoted to an upcoming exhibition at the Bard Graduate Center in New York: Majolica Mania—a survey of the vibrantly colored and ebulliently and eccentrically modeled ceramics that were a popular sensation in the late Victorian period in both Britain and America. Then the pandemic arrived in the United States, and the show was postponed, but now it has at opened to the public.

A visit to the Bard exhibition is somewhat like a tour of an exotic animal sanctuary. The ceramics on view are by turns striking—a five-foot-tall peacock sculpture—for example—strange, like the vase in the shape of a hand holding a pineapple; and even grotesque: it’s hard to imagine what notion sparked the design for a vessel in the approximate form of a nautilus shell with a lizard crawling over its top.

But, as the BGC’s founder and the exhibition curator, Susan Weber, notes, majolica had a serious side. Forms often derived from societal concerns of the late nineteenth century: the worrisomely rapid rise of coal smoke-belching industries prompted the making of ceramics in the forms of flora, fauna, and innocent pastoral scenes; the debate over Darwin’s newly advanced theory of evolution may be reflected in pieces like a monkey-shaped majolica garden seat. As Weber writes, for all the “quirky charm of some of its later incarnations, majolica, more than any other ceramic ware of the era, makes visible and tangible the anxieties, interests, and desires of nineteenth-century consumers on both sides of the Atlantic.”