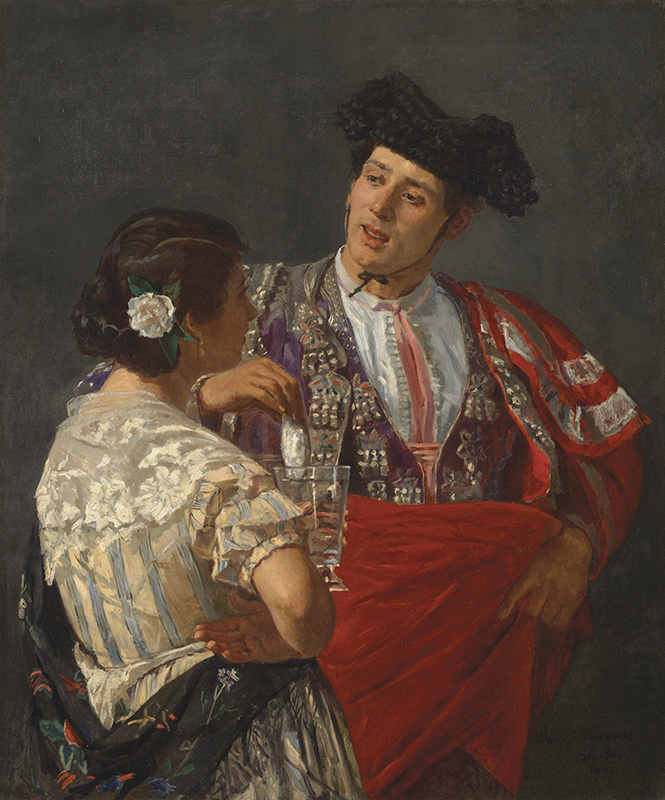 Everyone’s familiar with French, Italian, and British influence on American art; perhaps less with the influence of Spain. An upcoming exhibition at the Chrysler Museum of Art, Americans in Spain: Painting and Travel, 1820– 1920—the first stateside exhibition to explore this subject—takes visitors on a spin through Iberia with John Singer Sargent, Robert Henri, Mary Cassatt, and other artist-tourists during the height of the “Spanish Craze.”

Their interest piqued by romantic tales such as Washington Irving’s A History of the Life and Voyages of Christopher Columbus (1828) and Longfellow’s The Spanish Student (1843), as well as the handling of Spanish themes by British painters like David Wilkie and David Roberts, Americans were keen to see what this country—a cultural afterthought in Europe since its economic decline in the 1600s—had to offer. Like tourists collecting snapshots of the attractions dog-eared in guidebooks, American visitors took in the local color (matadors and flamenco dancers), the Old Masters (to be found at the newly established Prado), and evidence of the country’s grand and violent history symbolized by fortresses like the Alhambra. They eagerly incorporated these exotic subjects into their artwork. Two paintings by William Merritt Chase depict his wife dressed in the traditional costume of Spanish women. For the full-length work A Tambourine Player: Mrs. Chase as a Spanish Dancer (c. 1886) the painter portrays his wife boldly silhouetted against a dark background à la portraiture of the Spanish Golden Age of art and literature two centuries before. Cassatt took up Spanish portraiture tropes as well, and works such as Offering the Panal to the Bullfighter (1873) would be among the first she would submit to the Paris Salon. Another painting by Cassatt, Spanish Girl Leaning on a Window Sill (1872), which shows a dramatically lit maiden with a contemplative expression written on her pretty, dark-browed face, will be introduced to American audiences for the first time.

Chase and Henri both produced accomplished copies of Velázquez (his 1640 Aesop and his portrait of Queen Mariana, respectively), and the attention they paid to that particular Old Master indicates the ultimate influence Spain would have on the course of modern art. For it was Velázquez’s unsparing realism, mixed with the personal flair he demonstrated by his confident and idiosyncratic handling of paint, that the Americans (and, for that matter, all would-be modern artists in Europe) coveted. It was their adoption of these elements that paved the way for the triumph of impressionism, and for what would come after.