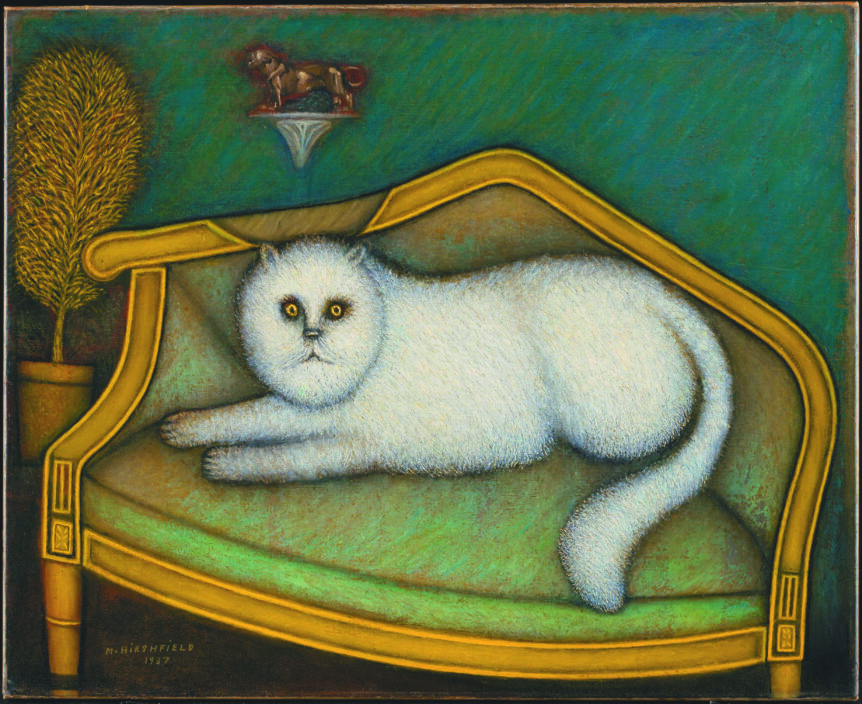 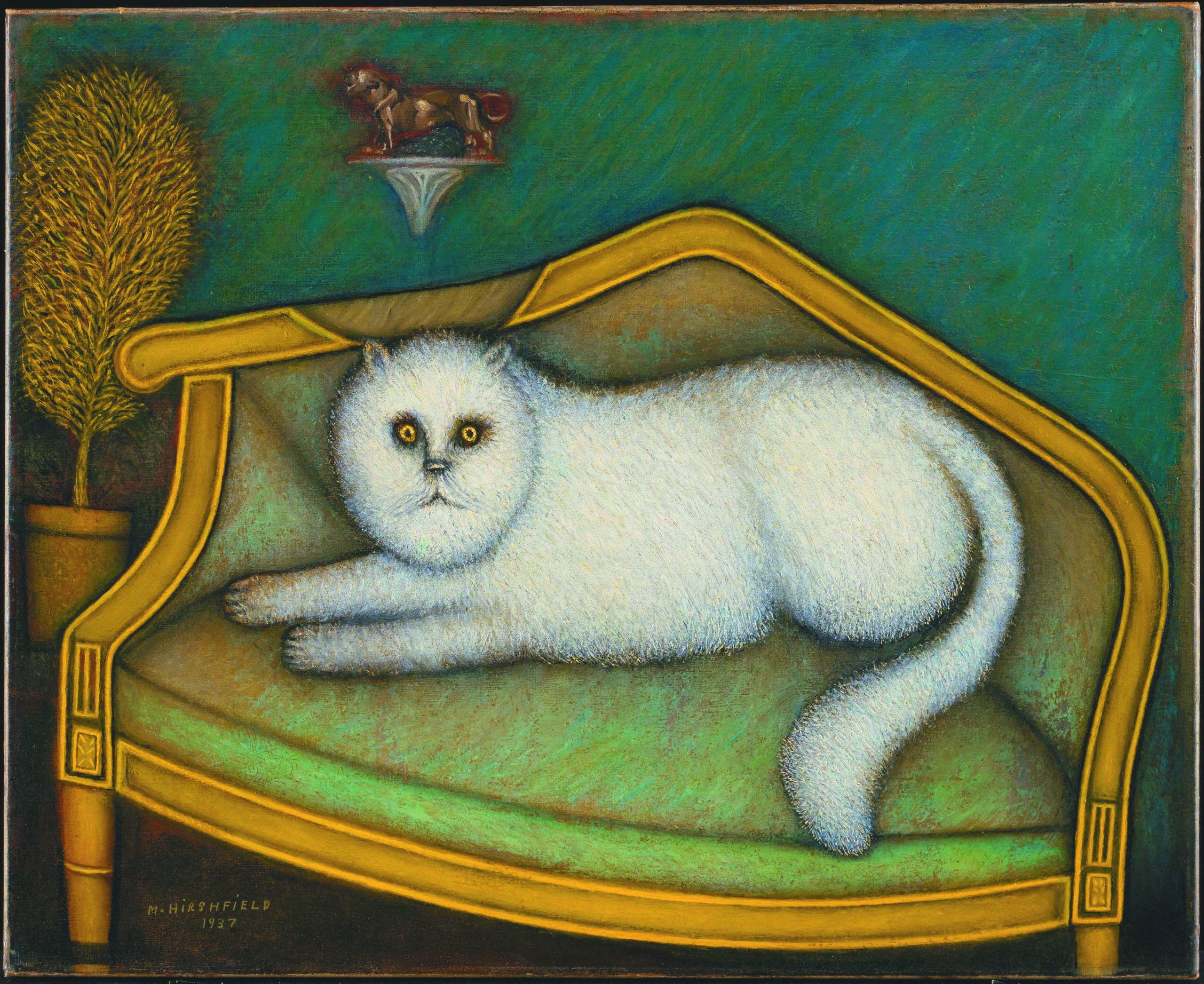 Here is proof, once again, that the spark of artistic genius may glow in the hearts of even the most unlikely-seeming people. Morris Hirshfield came to the United States in 1890 at age eighteen, an immigrant from Poland. He found a job in the New York City garment industry, working his way up over the years from pattern cutter to tailor.

In 1912, with relatives, Hirshfield opened the E-Z Walk Manufacturing Company, a maker of orthopedic footwear. The firm added a line of elegant “boudoir slippers,” designed by Hirshfield with embellishments such as needlework and pom-poms, that proved to be a hit. Thanks to poor financial management, however, the firm went belly-up in the mid-1930s. 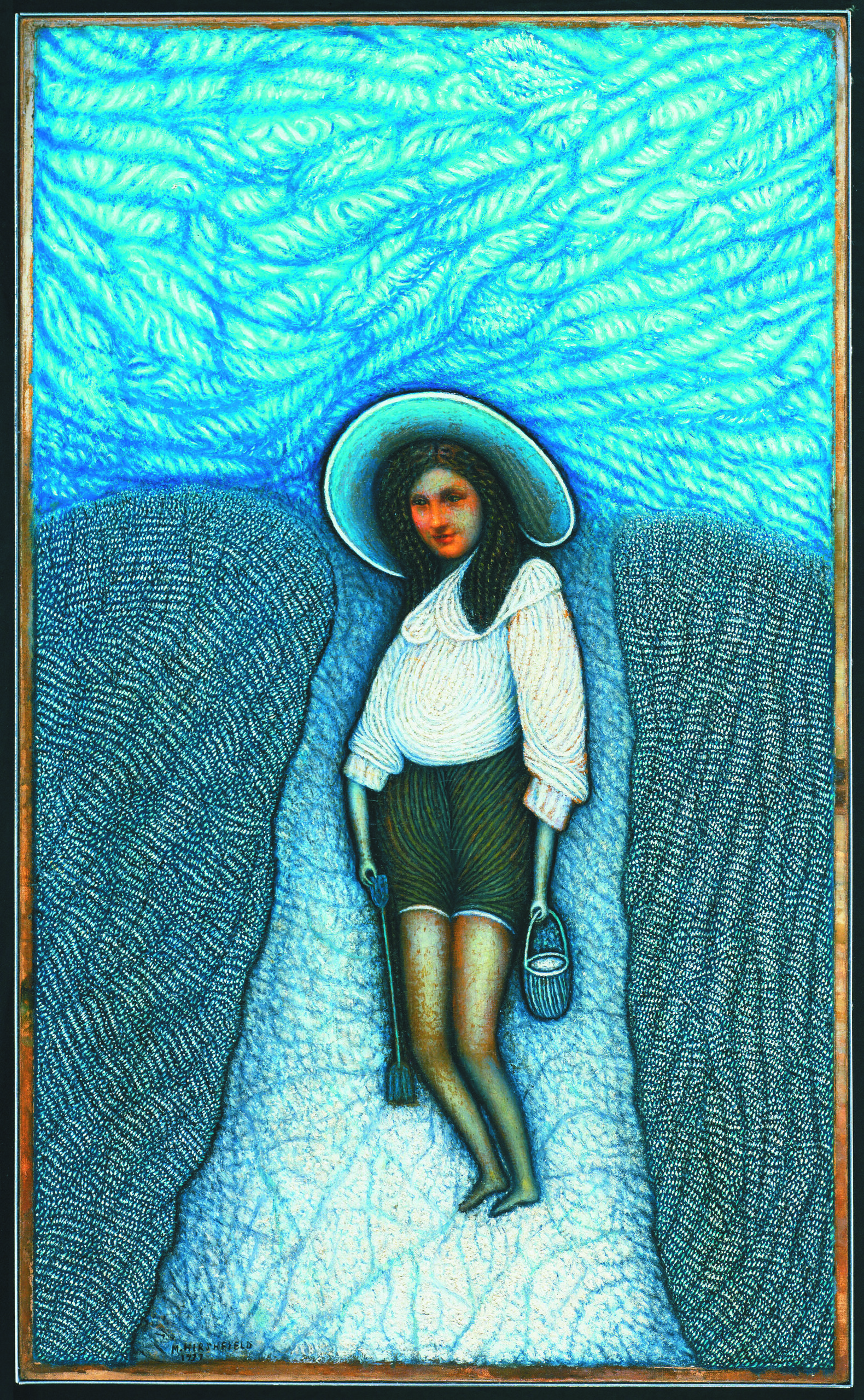 After scraping by for several years as a “foot appliance consultant,” as he identified himself on business cards, Hirshfield retired in 1937 and took up painting. To save money on canvases, he painted atop other pictures he owned. By 1939, he had completed two meticulous- ly and heavily layered works—Angora Cat and Beach Girl. Like many self-taught artists, Hirshfield had trouble with the formal aspects of painting—the women he depicts, for example, tend to have two left feet—but he more than made up for that with boldness and imagination. The cat—enormously out-of-scale and with fur that seems to bristle with static electricity—stares at the viewer with a disturbing directness, while the beach girl (her face is a remnant of the under- painting) is posed against a strange, roiling, vivid blue background.

Hirshfield showed the two newly completed artworks to a curator at the Brooklyn Museum, and, by chance, they came to the attention of the influential modern art collector, and later dealer, Sidney Janis, who coincidentally had made his fortune in the garment trade. Janis became Hirshfield’s champion and had his paintings included in a show of unknown artists that year at the Museum of Modern Art.

He introduced Hirshfield’s work to André Breton, who included it in a landmark exhibition of surrealist art in 1942. The following year, Hirshfield was given a solo show at MoMA. Peggy Guggenheim bought one of his paintings, and the prominent art critic Clement Greenberg would go so far as to say that Hirshfield “would hold his own against any competition” among liv- ing American painters. Hirshfield had little time to enjoy his fame. He died in 1946 at the age of seventy-four.

The celebrity that attended his name wore off over the years, and while Hirshfield’s work has consistently been included in most major shows of self-taught American art, Morris Hirshfield Rediscovered, a current exhibition at the American Folk Art Museum, is the artist’s first significant solo showcase in decades. By the time of his death, Hirshfield had completed some seventy-eight paintings, and forty of them are included in the AFAM show. The exhibition coincides with the publication of Master of the Two Left Feet, a scholarly monograph by Stanford University art historian Richard Meyer, available from the MIT Press.