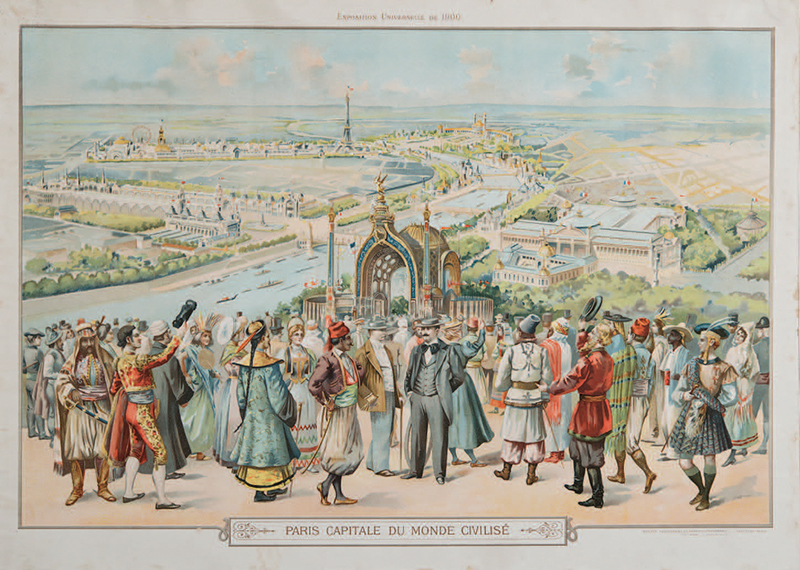 Toward the close of the nineteenth century, international expositions proliferated throughout western Europe and the United States as nations sought to define their identities in a rapidly changing world. In addition to serving as advertisements for intellectual and industrial progress, these grand displays of national selfhood functioned as powerful narrative tools that countries used to shape how they were perceived globally. Through a showcase of prints designed to promote the 1889 and 1900 Expositions Universelles in Paris, a current exhibition at Rutgers University’s Zimmerli Art Museum examines how images were used to foster and project a French national identity.

The images that comprise that show, Meet Me at the Fair: Universal Expositions in Paris, present a tessellated view of France’s world-building process. Carefully composed to highlight the country’s sophistication and modernity, the prints celebrate its industry—the making of everything from machinery to chicory coffee; its social customs and culture; and the physical structures built to showcase the expos, such as the Eiffel Tower and the Grand Palais. The result of this ad hoc development was an iconographic shorthand that shouted “Vive la France!” to the international community.

To try to encapsulate the wealth of material at the expos and the experience of it, illustrators relied on visual sound bites: broad sketches and caricatures that were ironic and sincere by turns. At the Zimmerli, idealistic depictions of Paris are countered by cartoonish parodies— such as Honoré Daumier’s wry take L’Exposition universelle . . .—demonstrating a collective uncertainty among the French about the identity of their country.

But national obsessions with self-representation had dark consequences. They influenced the Serbian push for autonomy from Austria-Hungary, French and British concerns with maintaining overseas empires, and the jingoistic Völkisch movement that followed German unification. All set the table for the horrors of World War I, while the very technological advancements that the Paris fairs celebrated led inexorably to the making of war machines. Though the Zimmerli show covers prewar moments, it exposes the tensions that went on to explode Western Europe—and, indeed, the world. Amid the colorful bustle of presentation, innovation, buying, and selling, the fundamental question of progress remains: where will it actually take us?