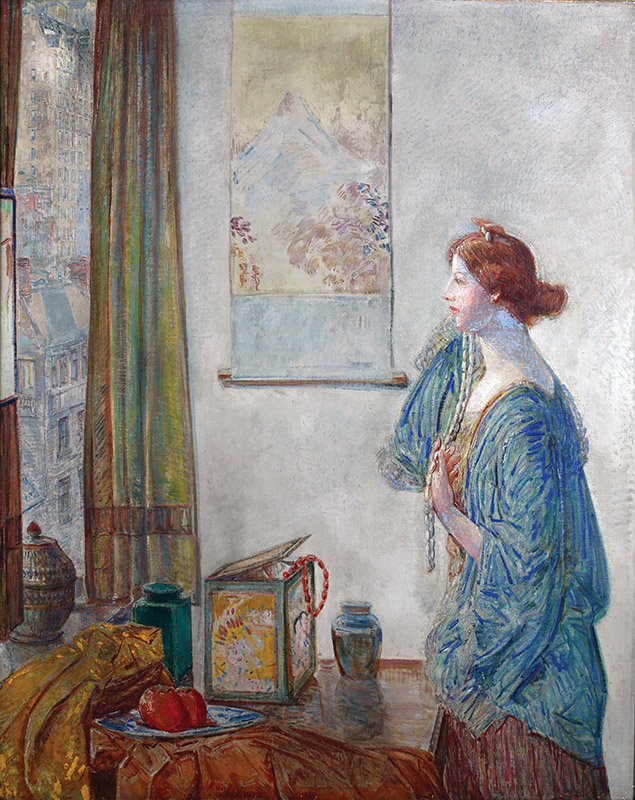 In 1921 the British painter and printmaker C. R. W. Nevinson declared that “The most beautiful products of the modern world are a Rolls-Royce car and a skyscraper.” Nevinson was not alone in making a connection between modern consumer products and the skyscrapers then going up in New York and other American cities. A current exhibition at the Fralin Museum of Art at the University of Virginia, Skyscraper Gothic, shows how Jazz Age skyscrapers with their characteristic stepped-back profiles grew, in part, from the emulation of Gothic architecture.

Not the first, but perhaps the most notable expression of skyscraper Gothic arrived with the Woolworth Building on lower Broadway in 1913, designed by New York architect Cass Gilbert. The exhibition features many highly detailed working drawings for the building, on loan from the collection of the Vanderbilt University Fine Arts Gallery, which will launch a scaled down version of the show in early 2022. Dubbed the “Cathedral of Commerce” by some critics, the Woolworth Building was equated with modernity and the commercial success of new multinational corporations such as dime-store chains. The tower built between 1923 and 1925 for the Chicago Tribune Company on North Michigan Avenue from a design by the firm of Hood and Howells, the winners of its international architectural competition, was the next great expression of skyscraper Gothic, but also the style’s swan song: in the 1930s, partly as a result of the immigration of European modernist architects fleeing an increasingly hostile political climate abroad, the use of such a historic style for a fundamentally modern building type came under increasing critical fire.

As skyscraper Gothic evolved into the streamlined art deco style, the telescoping forms of the tall buildings of American cities like New York, Chicago, and Detroit inspired designers of toys, furniture, tableware, and more. Many examples of such skyscraper-inspired household objects are on display at the Fralin.

The new buildings and commercial skylines also captured the imaginations of artists, who ranged from the wellestablished American impressionist Childe Hassam—whose large canvas The Skyscraper Window was painted near the end of his life in 1935—to newcomers such as Chicago painter, sculptor, and printmaker John Bradley Storrs. His sculpture New York is clearly modeled on an art deco skyscraper. Among the new discoveries on view in the exhibition is Amaza Lee Meredith’s untitled oil, a paean to Manhattan’s skyline.

— Kevin D. Murphy (chair of the department of the history of art and architecture at Vanderbilt University and co-curator of Skyscraper Gothic)