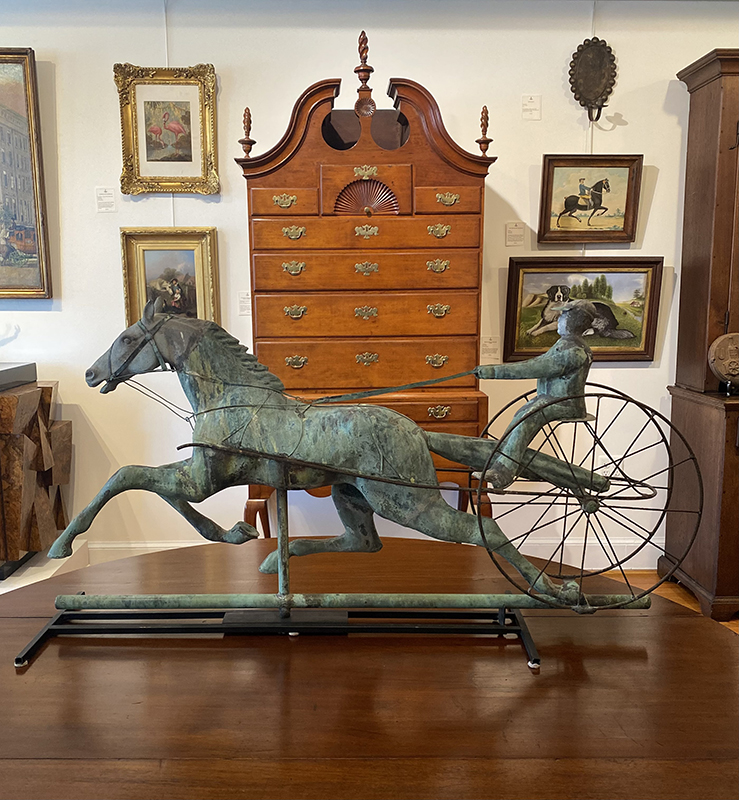 For Taylor Thistlethwaite, a young Virginia antiques dealer, being in this business is not about having a homogenous, one-track vision. As he jokes, “having all eighteenth-century [furniture] would not be comfortable.” Though he is passionate about such pieces, in his shop he mixes and matches eighteenth to twentieth century works, both high art and vernacular examples. As he likes to put it: “I deal in three hundred years of American design.”

Thistlethwaite began his professional career on the road, an itinerant dealer taking his wares from show to show, chatting with long-time collectors and vendors. But last year, while eating at a restaurant in cozy Middleburg, Virginia, he saw a “for sale” sign on a charming hip-roofed brick building. Only an hour outside of Washington, DC, the shop is now his landing pad and a meeting spot for both new and seasoned antiques enthusiasts. Travelers looking to get out of the city often curiously wander into Thistlethwaite Americana, where he is eager to pass on his passion for antiques to anyone who is interested in history and design. It’s the same way he learned about antiques as a child, visiting shops with his family. On a warm, summer day, the door to his shop is literally always open.

It’s this genial connection with his clients that makes Thistlethwaite’s shop such a rich and inviting hub. The best “finds” of his career have not been objects, he says, but friends. His approach to collecting and selling antiques emphasizes the importance and value of having an educated expert on your side. You can’t get the curated attention, knowledge, and experience of a dealer when you buy antiques at auction. Plus, working with a dealer can be like having a mentor to help you develop your own expertise. The friendship between dealer and client is special, and Thistlethwaite is emphatic that this is one of the only industries where such friendships can develop. “You don’t go to a barbecue that your car salesman has,” he says.

He has been fortunate to have his own pantheon of teachers along the way. Thistlethwaite undertook postgraduate studies at the Museum of Early Southern Decorative Art’s Summer Institute, where curator Robert Leath helped him uncover the story of two southern chairs he had purchased as a teenager. It ended up being the discovery of a lifetime—when sold, the chairs helped him finance the rest of his graduate studies. Another major figure in Thistlethwaite’s career is the veteran dealer Sumpter Priddy. “I wouldn’t be in this business if it wasn’t for him,” Thistlethwaite says. “He taught me to always contextualize pieces in an environment and [show] how important they are as cultural references.”

Thistlethwaite’s success also comes thanks to the support of a close-knit community of scholars and other dealers. Surely there is competition for the best finds and the most important discoveries, but there is also a great deal of camaraderie among dealers of Americana. It is a field with a lot to celebrate, as well as to teach. “We need to understand that our past is not clean,” Thistlethwaite says. It is the continued collection and preservation of objects from our history, he suggests, that allows scholars to discover and understand our past and inform our future.

So, yes, some of the genres of work associated with Americana may fade in and out of popularity, but for Thistlethwaite, collecting antiques is not about what’s popular. It’s about an object that reflects a particular time, place, and way of life. If you buy your furniture at Pottery Barn, he explains, you can get the same piece in California or in Maine. If you buy from an antiques shop in either of those places, you’re going to get something completely different—something that tells a story about life along the Pacific Coast or life in New England. Having traveled all over the country to make a living in the pre-Covid antiques market, Thistlethwaite values this personal connection to places. When his son was born earlier this year, he and his wife, Rebecca, decorated the nursery with antique maps of their hometowns and of their current city of residence. The place where you’re born is not just a pin on a map. To Thistlethwaite, it’s a storybook of everyone and everything that came before you.