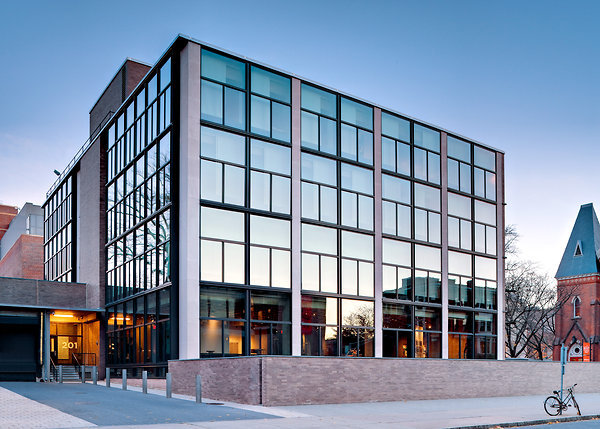 A FORGOTTEN TWENTIETH-CENTURY MILESTONE AT THE YALE UNIVERSITY ART GALLERY

The last time I visited the Yale University Art Gallery was late in 2012, just as its massive expansion and renovation had turned three distinctive architectural styles—Louis Kahn’s poetic glass, steel, and concrete poem of 1953, the Italianate Gothic Yale Art Gallery of 1928, and Street Hall, the 1866 building that was the collection’s original home—into a seamless and spacious enfilade of galleries that lure visitors into engaging with the whole of art history. It’s an architectural sleight of hand but a trick that doesn’t get old, as I discovered on a recent visit.

View of modern and contemporary art galleries at the Yale University Art Gallery.

Everything beckons seductively and everything is up to date, from the sleek gallery of eighteenth-century portrait miniatures that re-creates their personal intimacy to this summer’s well-staged exhibitions of diverse twentieth-century material: Small-Great Objects: Anni and Josef Albers in the Americas, which follows the well-worn path between folk or primitive art and the work of early modernists; Lumia: Thomas Wilford and the Art of Light, which is much less familiar but more alluring in its restaging of the projections of Thomas Wilford, whose early experiments with light are astonishingly fresh and often beautiful; and It Was a New Century: Reflections on Modern America, which tells one part of the last century’s American experience through the mild and appealing paintings of artists such as Maurice Prendergast, George Bellows, Everett Shinn, Childe Hassam, and so forth.

The other part of the American experience, the missing part, was the one I’d come to see: Let Us March On: Lee Friedlander and the Prayer Pilgrimage for Freedom. The year was 1957, three years after the Supreme Court’s ruling on Brown versus the Board of Education had changed little except to increase the resistance to change in the Southern states. Lee Friedlander was a twenty-two-year-old with a camera and a press pass to the gathering of some 30,000 African Americans (and a few whites) in front of the Lincoln Memorial. The pilgrimage was really a protest march dressed in Sunday best; the gatherers, in suits and ties, dresses and hats, observed the patient decorum that civil rights organizers thought necessary to “arouse the conscience of the nation.” Hands are raised; fists are not. It was 1957.

Sixty years later the Prayer Pilgrimage has mostly been forgotten, but for these photographs and the determination of the curator La Tanya S. Autry, they can finally be seen. “The documentary framework of civil rights photography is far too restricted,” Autry tells me. To her mind it should begin as far back as Sojourner Truth’s carte de visite and the portraits of Frederick Douglas. By expanding the framework we see how long the struggle was…and is. We also see into it in new ways.

These particular photographs are exceptional for the reasons that Lee Friedlander is always exceptional…even as a twenty-two-year-old. There were other photographers on the scene for Life and Ebony, but Friedlander’s shots stand out in the way that his work would for the next fifty years: he does not interpret the moment; he lets it come to him; he works the edges of a scene, and by doing that he captures its center and so much more. That the young Friedlander did not know what he would find in Washington DC is clear from what he did find among the patient, the determined, the moved and the unmoving.

Susan Sontag, high priestess of photography criticism, insists that photographs are always nostalgic by virtue of their inevitable backward glance. If sentimentality is a necessary ingredient of nostalgia, Lee Friedlander is the least sentimental photographer I can think of. These pictures bring an event home without confecting emotion. My favorite among them shows the twenty-eight-year-old Martin Luther King at the podium, squeezed to the left of the frame as Roy Wilkins of the NAACP (who had doubts about the wisdom of King’s speech) and other civil rights leaders occupy the rest of the rectangle without paying the speaker too much mind. King was not yet the King of his great rhetorical moments and this speech, “Give Us the Ballot,” was not one the organizers were eager to hear …until he delivered it. After that he was on his way, and the mild prayer pilgrimage had achieved its objective of coercing Richard Nixon, the nation’s vice president, to meet with King, Wilkins, A. Philip Randolph, and others. The political significance of the event is described in the first volume of Taylor Branch’s biography of King, Parting the Waters: America in the King Years, 1954–63, but its emblematic significance resides in these images, which have never before been exhibited.

Sixty years after the event Freidlander’s photographs are now also available from Eakins Press in the accompanying book, Prayer Pilgrimage for Freedom, which also includes the typescript of “Give Us the Ballot,” the program for the event, and the flyer calling to “all who love justice and dignity and liberty, who love their country, and who love mankind” to participate. When Let Us March On closes this month it will move to the National Civil Rights Museum in Memphis, September 11–December 17. Other venues will follow though they have not yet been announced.

High praise to Yale, to Lee Friedlander who donated his photographs, and to La Tanya Autry for putting this phase of the long march on the road again.