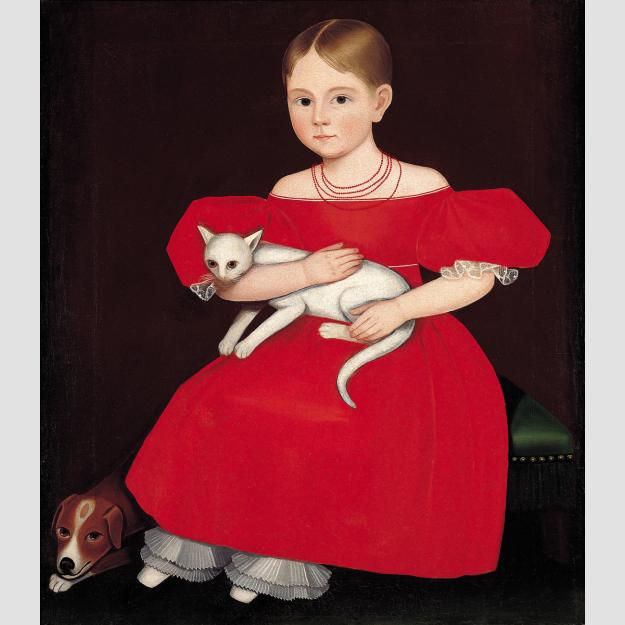 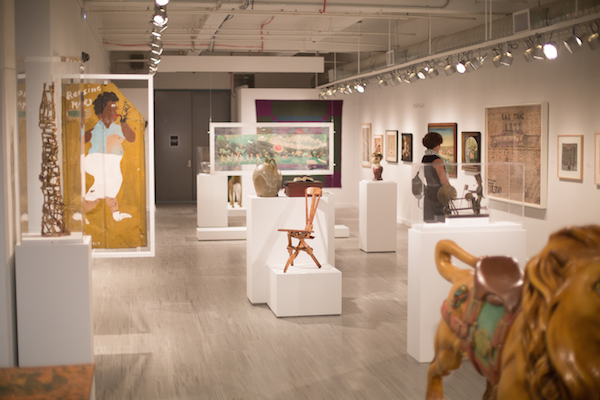 Such are the parochial passions of the New York art world that the American Folk Art Museum was immediately consigned to cultural ha-ha land in 2011, after it lost control of the award-winning building that Tod Williams and Billie Tsien designed for it on 53rd Street. (MoMA later demolished the building in an arrogant and much lamented architectural coup d’état.) Sometimes New York, especially the New York art world, reminds me of high school more than it does this nation’s cultural capital. Winners and losers, a coarse popularity contest fueled by the “hotness” that is fueled by money, characterizes the gallery scene and much of the art press. So who in New York could have predicted that AFAM would rise phoenix-like from its small perch at 2 Lincoln Square to mount exhibitions acclaimed by the New York Times, tour some of them widely, draw crowds, and just this week open another gallery across the river in Long Island City, Queens where PS1, the Noguchi Museum, and a busy community of artists have made the area an active destination in the arts? 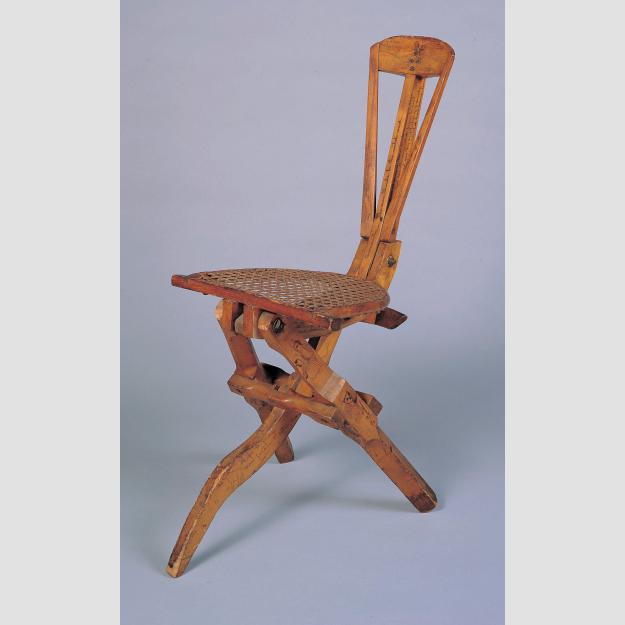 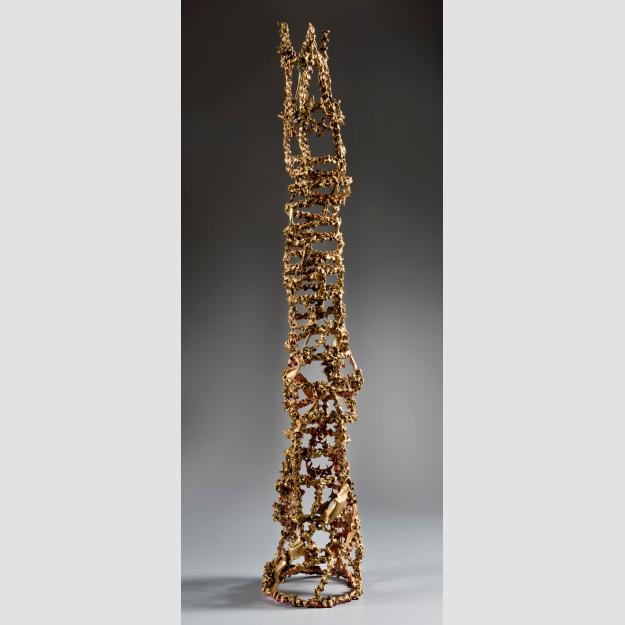 AFAM’s Self-Taught Genius Gallery opened September 26 in LIC with an exhibition of some fifty-five works culled from the museum’s huge Self-Taught Genius: Treasures from the American Folk Art Museum exhibition that toured the country, appearing in seven venues over three and a half years. The new gallery on one of LIC’s many industrial blocks adjoins the administrative offices and archives of the museum. It’s long, brightly lit, and inviting. If you feel a strong connection with many of these works, as I do, you will value the intimacy that the gallery encourages. For this initial show curators Stacy Hollander and Valérie Rousseau have selected a mix of the collection’s greatest hits along with lesser known works: Ammi Phillips’s Girl in Red Dress with Cat and Dog(1830-1835) is here, as it must be, but you will also discover Hosea Hayden’s Folding Chair (1883-1896), which I particularly like for its form and the elegant, un-parsable writing that covers every surface. AFAM keeps the boundaries between past and present fluid, an admirable approach that allows Rousseau to include a recent acquisition like Lonnie Holley’s 1994 sculpture, Don’t Go Crossing My Fence.

Girl in Red Dress with Cat and Dog by Ammi Phillips. Photo by John Parnell

What lies ahead for this Long Island City gallery? It will provide a counterpoint to AFAM’s exhibitions at 2 Lincoln Square by continuing to mount shows drawn from its permanent collection of some eight thousand works—perhaps as many as two or three per year. A new curator, Sarah Margolis-Pineo, will arrive to work with Hollander and Rousseau. She will also be charged with engaging the Queens community in the museum’s educational and cultural programs, long a priority for AFAM but less a reality until the 2012 appointment of its director, Anne-Imelda Radice, the miracle worker behind the museum’s resurgence who has inspired a loyal board of trustees, the Henry Luce Foundation, La Guardia Community College, the City of New York, and who knows what else in her efforts. Radice’s timing here has been brilliant. Three years ago this space was available and affordable. This year, as the city destroys communities by building high-rise housing in LIC and everywhere else, it would be neither. But AFAM is here now, folk and outsider art both past and present are here, the Queens community is engaged, and Manhattan riders are only minutes away on the 7 train.

Out and about in Long Island City

If you live in Brooklyn as I do, you can take the G train to LIC, a swift trip on the only subway that goes between the two boroughs without passing through Manhattan. Despite this outer borough intimacy, Long Island City has often baffled me. The street grid comes straight from bastard’s headquarters: 45th Street, 45th Avenue, 45th Road, 45th Drive…all meandering around one another in a way that drove you nuts in the old days without a smart phone or a Boy Scout to help.

There is a strong, if quixotic, battle being waged here by artists and visionaries such as Sheila Lewandowski, executive director of the Chocolate Factory Theater, who has lived in the neighborhood for twenty-two years and is the unofficial mayor of Long Island City. Lewandowski has been on the side of everything good thing that has happened in the neighborhood—preservation, the Annual Taste of Long Island City, the large community garden—and a fearsome opponent of all that is bad, principally the gross overdevelopment promoted by our current mayor. I met her at the opening of the Self-Taught Genius Gallery and we took a long, brisk walk together as she greeted friends and showed me the sights, leaving me across from the Chocolate Factory Theater at Casa Enrique, a Michelin-starred Mexican restaurant where I had a good meal and a great conversation with residents and visitors to the neighborhood.

An atmosphere of end days hangs in the air of Long Island City. Its streets are being dwarfed by the glass and steel monoliths that have replaced the vernacular architecture of factories, warehouses, and shops. In a transparent effort to appease residents developers are forced to add bits of park as they build up and out, but Long Island City will still come in close to last among New York’s neighborhoods in open space, and these miniscule gestures will be offset by the exponential growth in population.

Even the famous view of Manhattan from the Queensboro Bridge will be erased by a gawky string of luxury high-rise apartments. If artists are partly responsible for drawing attention to the neighborhood, they have also been vocal about its preservation. The sculptor Joel Shapiro, among this country’s most recognizable and successful artists, has a studio here. When the city held hearings about the proposed development, Shapiro went to City Hall and read the following passage from The Great Gatsby:

The city seen from the Queensboro Bridge is always the city seen for the first time, in its first wild promise of all the mystery and the beauty in the world. 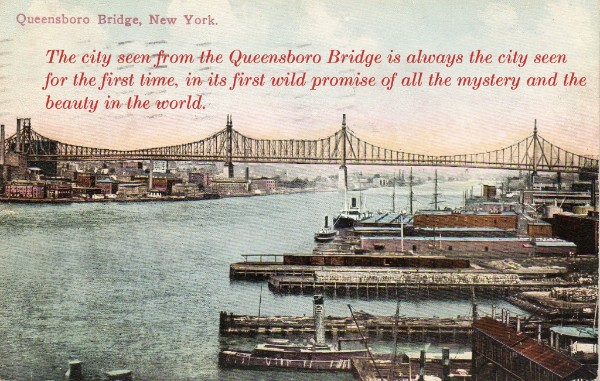