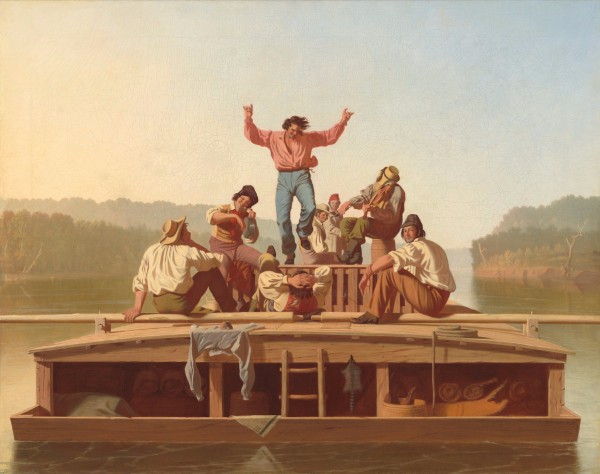 UNDER WESTERN EYES: Ukiyo-e at the Museum of Fine Arts Boston

On a day last week when I found myself wishing to be almost anywhere but here and now, I stepped into the Museum of Fine Arts in Boston for an exhibition of the Japanese woodblock prints known as ukiyo-e and was indeed taken away. That is surely one of the things museums are still meant to do for us even as they must also pander, promote, and squeeze their exhibitions for as much contemporary juice as possible. Showdown! Kuniyoshi vs Kunisada is no exception. Billing it as if it were prizefight (“Two master printmakers go head to head”), the MFA encourages visitors to use their smart phones to vote for the artist they prefer: “Are you #TeamKuniyoshi or #TeamKunisada?”

As it turns out, the hectic promotion is entirely in keeping with the period (roughly 1820-1860) when these particular artists’ work in the long tradition of ukiyo-e (images of the floating world or as we might describe it, the passing scene) flourished. During those years huge numbers of people of all classes flocked to Edo (Tokyo) bookshops to purchase the prints, many of which cost little more than a bowl of noodles. Kuniyoshi and Kunisada and their publishers were indeed locked in combat for public recognition, sales and commissions as they went about issuing what amounts to the world’s first mass produced art form. Japan, isolated and insular, was experiencing a flowering of popular culture a century before Jerry Siegel and Joe Shuster sent Superman to save civilization. 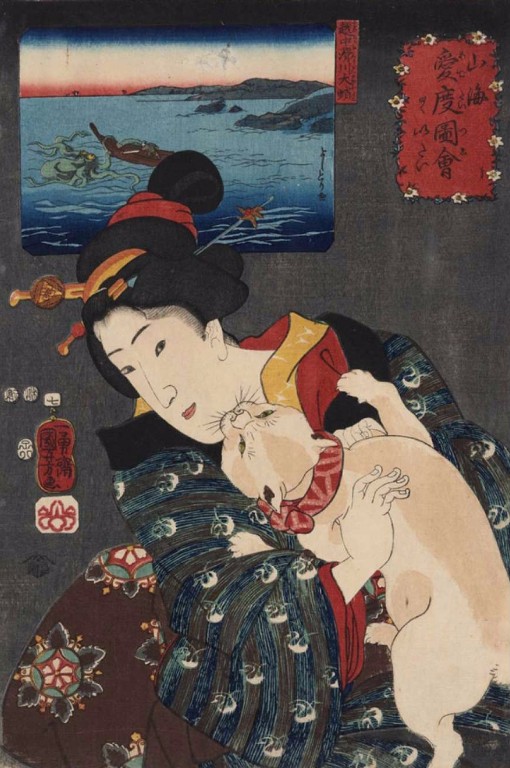 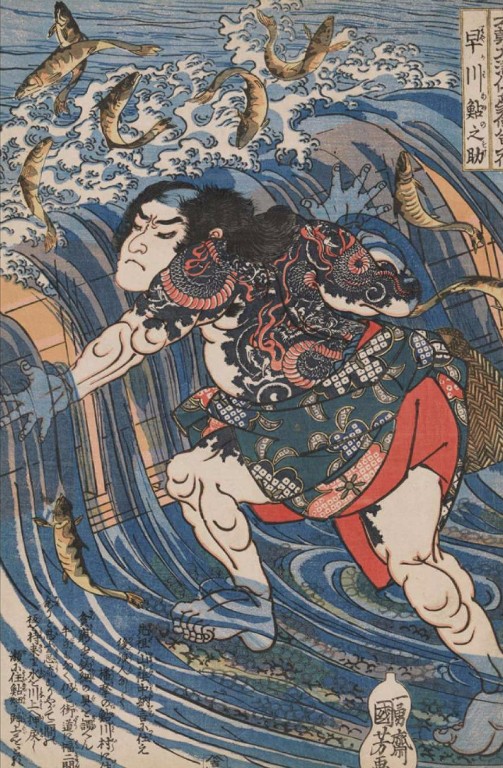 But I would not make too much of this whiff of pop cultural familiarity because once you are inside the exhibition you are lost in the floating world of ukiyo-e, enchanted, bewildered, astonished and entranced…in short, taken away. Warriors, monsters, courtesans, and kabuki actors are all rendered with a baffling density of detail in 100 woodblock prints by these two rival artists who were each responsible for as many as 30,000 or more designs in their lifetimes. The prints are arranged thematically (Heroes and Monsters; Superstars of Kabuki; Edo Fashionistas and so forth) and the two artists are differentiated by the color of the frames around their work: Kuniyoshi’s have black ash frames while Kunisada’s are framed in cherry). They are easy to differentiate after awhile but they both have the capacity to transport the viewer. Did I vote? No, but Kunisada’s prints struck a deeper chord for me for reasons that will be clear below.

I was lucky enough to have just the right guide to this exhibition in Allen Hockley of Dartmouth University who has written well and widely on the subject. A good guide gives you the information you need; a great one does that while also allowing you to be transported by the experience. Hockley is a great guide. I was surprised to learn from him that although the artists created the designs, the elaborate carving of the woodblocks (sometimes as many as twenty blocks for one image) were done by master engravers while the coloring was determined by the publishers and done by printers. When you consider the intricacy of the carving in, for instance, a tiny lock of hair or the seven shades of blue in a particular kimono it makes sense that these images had to be the work of many hands even though the artists’ names are the only ones known to us.

There are of course many places where these scenes of fashionable city life, famous actors, and elaborately tattooed warriors seem to touch on a celebrity culture familiar to our time and yet I responded far more strongly to their differentness—to the theatricality, the unfamiliar body language, the ceremonial flavor of even the most quotidian scenes, and the way in which clothes were minutely detailed and differentiated while faces, for the most part, were not. If I liked Kunisada a bit more than Kuniyoshi it was simply because he struck me as less familiar, less a progenitor of manga or anime and, in part, because I had come here to appreciate what I could not fully understand.

How wonderfully strange and revelatory it was to follow this experience by walking over to the museum’s Art of the Americas wing and suddenly see ourselves as if from the outside. It was a fleeting revelation and one for which I was blissfully unprepared. What did I see in Sargent’s The Daughters of Edward Darley Boit, in William Matthew Prior’s Copeland Sisters, in paintings by George Caleb Bingham, Frederic Church and Thomas Cole, in the familiar furniture, ceramics and silver? I did not see a floating world or even any reason for coarse comparisons between cultures. I simply saw, as if for the first time, what we were and what we’d hoped to become.

Showdown! Kuniyoshi vs. Kunisada will be at the Museum of Fine Arts Boston until December 20