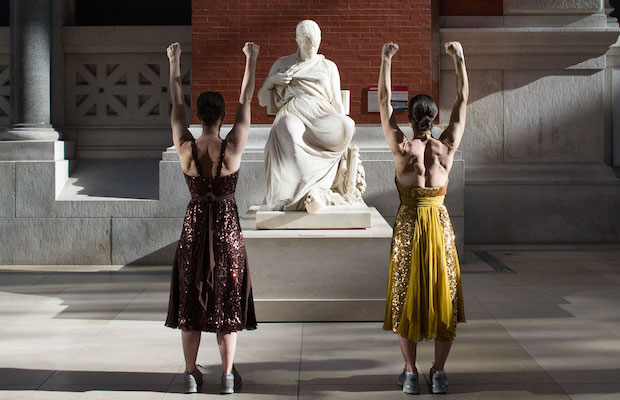 On the morning of April 1 Hyperallergic a favorite source for arts news posted the following news flash from the Metropolitan Museum of Art in New York:

Fully articulated with hyperlinks, plausible quotes from the museum’s president and its outgoing director, appropriate specifics on overnights in the Worsham Rockefeller Dressing Room (price to be determined) or the bedroom of the Venetian Sagredo Palace ($5000 per), the post observed every rule of a good hoax including the cardinal one: it was almost believable.

A view of one of the many listings by the Metropolitan Museum of Art on Airbnb.

The Met has been much in the news. Its attendance is good; its finances, for the moment, are not. The Director has resigned. Apparently a sonorous voice and an overcooked British accent were enough to impress the trustees in 2009 but not sufficient to the task at hand. The Met is a very big fish, a jewel in the crown of our imperial city. The press cannot get enough of its troubles. This is New York; everyone wants to pile on.

I don’t, but I should admit that earlier this year the Met launched a parody-worthy initiative of its own: The Museum Workout, a series of early morning aerobic exercises in the galleries led by dancers from the Monica Bill Barnes & Company. Yes, it was for real and very popular too. SOLD OUT the website announced for all the dates I tried. You can see the video online: From Arms and Armor to the American Wing two dancers lead a group through the galleries accompanied by the Bee Gees’ Stayin’ Alive. (I’m goin’ nowhere/somebody help me!”). Talk about sweating to the oldies: Armored horses turn tail, a bust of Benjamin Franklin looks on impassively, Sargent’s Madam X turns away.

It isn’t easy to find new ways for people to experience a museum’s collections these days and The Museum Workout was no more than an amusing one-off, meant to attract attention for a limited period. There are more serious strategies underway at the Met, especially in the American Wing where its director Sylvia Yount is doing many good things and anticipating many more beginning, at long last, with displaying indigenous North American art in its galleries of American art instead of isolating it with works from Africa, Oceana and the Americas. The impressive gift of ninety-one pieces from Charles and Valerie Diker’s collection has made this possible.

Having visited the Dikers in their Manhattan apartment I can attest to the intelligence with which they have also integrated modern and contemporary art with indigenous works. Although the Met has bet too heavily on its expansion into the contemporary field, it has been slow to mix periods and materials in existing galleries, something Sylvia has assured me they will do in the American Wing when and where it is illuminating and appropriate.

THINGS WE DID NOT NEED TO BE TOLD

If the American Wing at the Met is proceeding cautiously with respect to introducing contemporary material alongside eighteenth or nineteenth-century works, they are showing unusual restraint. The fact is, as the Art Newspaperreported this month, “the Art of Today Dominates U.S. Museums.” The statistics are convincing though not surprising: as many as half of all exhibitions at leading museums are of contemporary material. In the same issue you can find the attendance figures, domestic and international, for virtually every museum show. They tell a similar story.

The art world has become a creature of the art market and at the moment older art is somewhat out of financial favor, which means it is also out of fashion. When the press and many museums are not busy ignoring American art of the eighteenth and nineteenth centuries, they are often patronizing a few of its artists as somehow “looking so contemporary” as if that were the finest compliment to be paid. When the Met begins to broaden the American Wing under Sylvia Yount’s direction, my guess is that they will not do this and instead find ways of illuminating historic material until it comes alive to visitors and can be seen anew.

TAKING ON THE RED HOT AND COOL: THE QUESTROYAL STRATEGY

Over at Questroyal on Park Avenue, a premium gallery for eighteenth, nineteenth and early twentieth-century American art, the battle between past and present has been joined in a bold way. Lou Salerno, Questroyal’s director and an expert in frame-breaking candor, frequently issues small catalogues of impressive works for sale with disarming descriptions and challenging themes such as, Choose with Your Heart: Twenty-One works by Important American Painters. Inside this particular little catalogue recipients found twenty-one highly desirable paintings, their artists’ names withheld. You had to admire the move. More recently, Salerno and his staff have invaded prominent places such as The New Yorker, the New York Times Magazine and Architectural Digestwith ads challenging art lovers to run against the tide of the contemporary and be “uncool.”

I went up to Questroyal to see their exhibition of Hudson River School paintings and to ask Lou what, exactly, he is doing with these sassy ads.

EP: Your uncool ad campaign running in some prominent (and pricey) places could be described as counterintuitive…or, borrowing from sports lingo, competing from behind. What prompted this approach?

LS: It certainly seems counterintuitive to encourage a person to be “uncool” in an effort to arouse interest in American nineteenth century paintings. But people who admire these paintings are not dissuaded from purchasing them for the fear of being uncool. Nevertheless, in my lifelong attempt to write copy that resonates with potential clients, I strive to find thought provoking common ground. If we admire art that is not on display at the most celebrated openings, that is not part of the latest trend, we are simply uncool. But this realization is accompanied by the pride of individualism. It takes courage to value your own opinion in the absence of the support of peers. It feels like a worthy rebellion. So UNCOOL becomes the mantra for those of us who live in defiance of cultural norms. The Uncool concept connects legions of free thinkers. They can all fly the uncool banner and, should they need it, find solace in being part of a counter-trend.

EP: What sort of response are you getting to the ads? Have they actually reached collectors who have not previously been drawn to nineteenth-century painting?

LS: The response has been extraordinary. People are having fun with it. It is fair to say that we have seen about a 50% uptick in interest. We are reaching people who simply want to buy what they love. They are not particularly interested in the nuances of collecting.

Ad in Architectural Digest, May 2017.

EP: How long will you keep the campaign going?

LS: I will likely continue the campaign until the end of the year. If I have another inspiration, I may run two simultaneous campaigns.

EP: Even though it is successful someone might argue that the uncool ads reinforce the high school mentality of the current art market– the sense that contemporary artists are cool and every one else from Homer to Wyeth should eat lunch alone. Are you, therefore, an agent provocateur?

LS: Whenever you profit by advocating your own agenda your ideas should be challenged. But, if I have somehow encouraged the world to pay more attention to America’s greatest artists then I will risk whatever label I’m given.