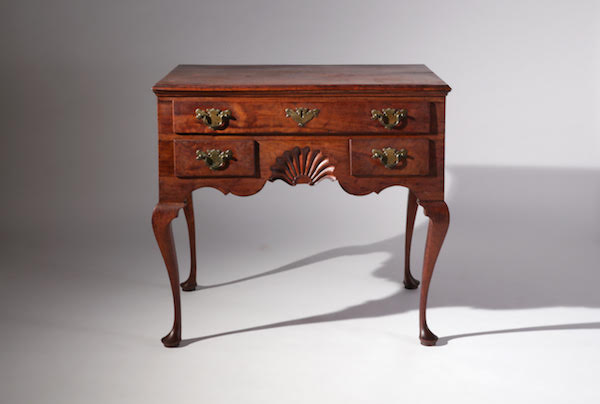 THE PAST RESURGENT: The Philadelphia Antiques Show turns a corner

Way down south on the “other” side of Broad Street, meaning the side opposite the stadiums where the Phillies, Eagles, and Flyers play, Philadelphia’s old Navy Yard has been retrofitted for twenty-first century ventures in finance, environmental research, retail brands such as Urban Outfitters, and best of all I think, a new Tastykakes bakery. The annual Philadelphia Antiques Show set up its tent here for four days in late April, the second consecutive year it has done so. Once the premier event for American material culture of the distant and not so distant past, the show has bounced around the city for a decade or so without regaining its footing. This time the crowds were healthy as were the sales.

So the Philadelphia Show has turned a corner and is, I hope, on its way to turning another one by exchanging its relationship with Penn Medicine for a much more meaningful and exciting one with the Philadelphia Museum of Art, currently among the most solid and adventurous museums in the land. Did I make this up? Did I hear it somewhere or only dream it? We will have to wait and see.

I am not a collector, dealer, or curator. I am simply a tourist of this country’s past as it bubbles up in booths selling schoolgirl samplers, nineteenth-century landscapes, high-end high- and low chests, and the mysterious flotsam of our collective unconscious in toys, flags, and relics of advertising. I treat the Philadelphia Antiques Show as if it were a giant Joseph Cornell box whose contents come together as I think about them, a museum with no fixed collection that I must catch on the fly and consider in my own time. I do not know what I am looking for or what I will find.

Four items got me considering the modern divorce of the beautiful from the useful seamlessly joined in centuries past. (Even Botticelli’s Primavera, I have learned, was originally part of a piece of furniture!) The gates, weathervane, jug and chest pictured here all have a calm unity of artistry and utility that are representative of something I treasure in this show and others like it.

The maker of the Rhode Island low chest did not have to think of himself as an artist; he simply was one. By contrast, an important contemporary furniture designer such as Wendell Castle must insist on the point and that gives his work, admirable though it is, a kind of self-consciousness I don’t miss when I look at this chest. Lesser examples from the same period and locale may be equally well made but this eighteenth-century piece, much talked about at the show and in the same family for just over two and a half centuries, has a combination of delicacy, strength, and effortless grace that sets it apart.

Am I weathervane allergic? I’ve heard it said and I will admit to a certain flippant disregard of the form in days past. But here was an exuberant and curious example circa 1840 from a Methodist Church in Orono, Maine in the booth of Ed Hild and Patrick Bell of Olde Hope Antiques. One of the pleasures of this field is the opportunity for an interloper like me to shoot the breeze with dealers like Pat and Ed. It seldom happens at Frieze or other contemporary fairs where gallery owners have a harder time masking their anxiety quotient. What did we talk about? I wondered what accounted for the unusual mix of design elements and materials in this aspirational object? Maybe Haley’s Comet Ed suggested, as the vane was made only a few years after the 1835 sighting of the comet which was a very big event back when what was “out there” was part of the great beyond not yet colonized by man. Maybe. It’s fun to think about and even more enjoyable to contemplate the trajectory of this object pointing out the wind so helpfully while also suggesting something of spiritual yearning.

Things made for an audience of one — portrait miniatures—are also sold by a dealership of one, Elle Shushan Portrait Miniatures. Great artistry that does not have to shout invokes a world very unlike our own when art could be joined to intimacy. The example I have chosen is, of course, far different from the images of treasured relatives, great beauties, and notable fops typical of most portrait miniatures but it has enough graphic punch to have prompted the show’s organizers to put it on city buses to publicize the event. I draw attention to it because it is just the kind of surprise I know will await me. Elle tells me that Peter Fitz shown so amusingly here as a smartly dressed stick figure may have carried this tiny tribute by the artist W.M. Huddy with him when he left the city to fight for the independence of Texas. I hope so. If he has been forgotten, his image is now indelible.

Samplers by schoolgirls and their teachers also invite intimate scrutiny plus a kind of allegorical thinking that is unfamiliar to most of us but not to dealers such as Stephen and Carol Huber. The Hubers were particularly interested in showing me Jane Wayman’s Adam and Eve sampler of 1792 because it introduces a surprising note: Eve’s delighted response to a bouquet from Adam. The serpent is there too and it looks to me as if the flowers are softening Eve up for the main temptation, the one the sly, insinuating serpent has prepared. We may not know as much as we would like about Jane Wayman but it is easy to see that she knew a great deal about what made the Fall inevitable and, perhaps, fortunate.

Things familiar to connoisseurs are often new to me as for instance my favorite object in the show: a panoramic mother-of-pearl image on reverse painted glass and paper depicting a train on the Rock Island line slicing through the America West. I came back to see it often enough to make a nuisance of myself in the booth of Nancy and Jim Glazer. Not many of these trade signs survived though as many as fifty or more were made and they graced waiting rooms in stations along the Rock Island line beginning around 1905 when the painstaking technique for making them was perfected. A panoramic photograph would have done as well but it would not have conveyed what thrills me here: the handmade in the service of speed and technology…the moment when beauty and power are held in a delicate equilibrium before the landscape was eventually subdued, before freedom had come to mean the license to plunder the land. Am I reading too much into this image? Maybe, although I am old enough to remember the thrill of the cross country train trips my parents took me on in the 1950s when there was still a lot of landscape to thrill to. I would not be able to show my daughter and granddaughter anything like that now.