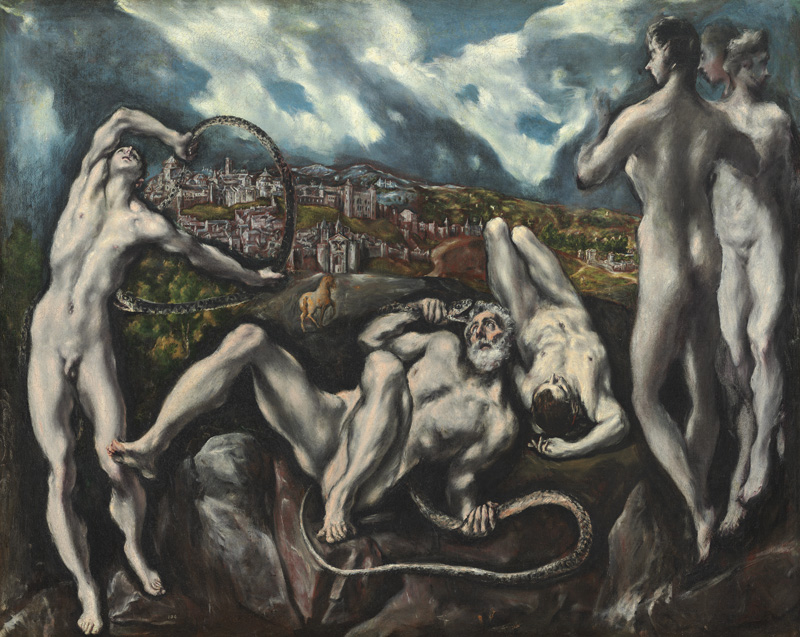 Imagine, as a kind of thought experiment, that a great painter of the fourteenth century—Giotto, for example—somehow came upon a work by Michelangelo or Titian. Would he feel perplexed or indignant or amazed at the technological advances in perspective and human anatomy that had occurred in the two centuries since his death? Or, through some mysterious communion among masters, would he instantly perceive a greatness equal to his own, but expressed in very different form? The answer, of course, is unknowable—except that something very much like that did indeed occur, once and only once in the history of art, when a Greek icon painter named Domenikos Theotokopoulos, better known as El Greco, arrived in Venice in 1567.

The subject of El Greco: Ambition and Defiance, an exhibition that began at the Grand Palais in Paris and has moved to the Art Institute of Chicago, was born in 1541 on the island of Crete, which at the time was a part of the Venetian Republic. Before seeking his fortune in Italy, El Greco trained as a painter of icons, those schematic, medieval religious images that have been central to Orthodox Christian faith for centuries. Bringing together more than fifty paintings and even some sculptures by El Greco, the present show focuses on the three stages of his checkered career: the period from his birth until he left for Venice in 1567; his three-year sojourn there, before he moved to Rome in 1570; and finally his transfer in 1577 to Madrid and then to Toledo, where he died in 1614. The show’s title refers obliquely to El Greco’s famously difficult personality: if his ambition motivated him to find fame in the West, his arrogance soon estranged him from most of his patrons, including Cardinal Alessandro Farnese and Philip II of Spain. It will come as little surprise, if the oft-told story is true, that  he failed to win many friends in Rome when, shortly after his arrival in the city, he offered to repaint the Sistine Chapel.

Although we cannot rule out that El Greco saw some examples of contemporary art, or at least engravings of them, before he reached Venice in 1567, such encounters, if indeed they occurred, would have been few and far between. The earliest work in the Chicago exhibition, St. Luke Painting the Virgin (Fig. 4), was created between 1560 and 1567 and is in the collection of the Benaki Museum in Athens. Although in poor condition—the figure of Luke has been so brutally effaced that one almost suspects iconoclasm—this thoroughly medieval work is indistinguishable from a thousand other Orthodox images made in Crete around the same time. Other than its exalted authorship, it would be of little interest and certainly it betrays no hint of any future greatness. And yet, El Greco, alone among his compatriots and his co-religionists, seems not only to have felt irresistibly drawn to Italy, but also to have sensed some innate power that few contemporaries, on the basis of his early work, could ever have imagined.

To begin to understand El Greco’s power and his position in Western culture, it is important to appreciate that, in the purest formal terms, Old Master painting had always been a closed, self-contained system that evolved only through some energetic impulse that emanated from within the system itself. But in the five hundred years in which this tradition dominated European art, it had never confronted an intrusion more alien to its essential nature than the arrival of El Greco in Venice in 1567. It is true that the elongated, phosphorescent figures that populate his works have parallels in the mannerist movement that pervaded Italy for much of the sixteenth century. But those parallels, alone or in concert, fail to account for the fundamentally aberrational nature of his art.

There are three levels to this aberration. Even when El Greco formally follows the mainstream of European art, as he did in the splendidly Titianesque The Penitent Magdalene of about 1577 (Fig. 2), he is decidedly odd. In his depiction of this beautiful woman, he is at his most faithful to retinal reality. Surely her liquid eyes and elongated hands strain credulity, but at least they remain in the general vicinity of anatomical truth. Their strangeness consists in a quality—recalling certain works by Dalí or Max Ernst—that seems both plausible and fundamentally transfigured by an intensity of feeling at once spiritual and carnal.

The second level of El Greco’s oddity consists in the liberties he takes with the perspectival and anatomical traditions of Old Master painting. Surely other mannerists had taken liberties, but they had never taken them this far. If his general conception of form and color and composition derives from Titian and especially from Tintoretto, whom he adulated, El Greco’s interpretation of these older masters is violently idiosyncratic. His famous View of Toledo of about 1598–1599 (Fig. 5) rejects the one-point perspective that had dominated Western art since Masaccio to create a beautiful but willfully distorted sense of space. In one of his final works, The Adoration of the Shepherds of 1612–1614 (Fig. 3), the figures float freely through a pictorial space that exploits to the fullest that compositional exorbitancy that Tinteretto had introduced into Western painting one generation earlier, on the walls of the Scuola Grande di San Rocco in Venice. In both of these works by El Greco, the established practices and protocols of Western painting are only just preserved, as though at any moment they might burst asunder. One is reminded of late compositions by Gustav Mahler, whose music challenges, but ultimately preserves, tonality, before it disintegrates completely in the work of his successor, Arnold Schoenberg.

That disintegration, however, finally does occur at the third level of El Greco’s oddity. One of the essential elements of Western painting, certainly from the time of Masaccio in 1425, but even from the time of Giotto a hundred years earlier, is an entrenched naturalism that derives from classical antiquity and is completely opposed to the schematic, abstract nature of medieval art. Though mannerism might distort the visible world, it did not seek to transform it fundamentally. But this is precisely what El Greco did in several of his works. In his Saint Martin and the Beggar (Fig. 1) the latter figure, impossibly pale and long-limbed, is anatomically inconceivable. This tendency is even more evident in El Greco’s late Laocoön (Fig. 7) of about 1610–1614, whose elongated forms and flattened perspective constitute as thorough a rejection of painterly precedent as Matisse’s earliest fauvist works. It is no accident, surely, that Picasso seized on this painting and imitated it several times.

But perhaps El Greco’s purest rejection of Old Master precedent was a far earlier work, The Entombment of Christ (Fig. 6) of  about 1571–1572.The flattened masses of its swaying figures have been reduced to mere patterns; the hills that dominate the middle ground are as schematic as an archetype; and Jesus’s left arm, as long as a leg, is unlike any other in European painting before the twentieth century. Meanwhile, the thick, slashing, fidgety brushstrokes recall nothing so much as those icons that El Greco painted on Crete, before he ever reached the West. Although the young El Greco was captivated by what he saw on his arrival in Venice, and although he adopted, to dazzling effect, the traditions that he discovered there, the medieval habits into which he was born could reassert themselves at any moment, and they often did.