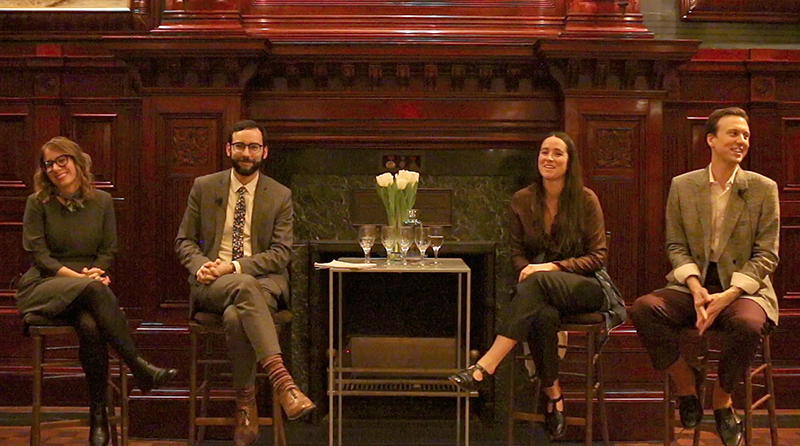 As I write this it is early February, yet I still feel a bit of lingering zing from our participation last month in the sixty-fifth annual Winter Show, which was billed as the event’s Sapphire Jubilee edition. The Magazine ANTIQUES has had an association with the show, held at the Park Avenue Armory, almost from the beginning. For decades we’ve hosted a luncheon for the vetting committee—the scholars, curators, and others who strive to make sure that everything for sale is on the level.

This year, we upped our Winter Show game. My colleagues and I interviewed dozens of collectors and other regular attendees, asking them to reminisce about their favorite experiences of the show for a feature article titled “Sapphire Memories,” published in the Winter Show catalogue. (The show’s website has a link to a digital version of the catalogue, if you’re interested.)

The Magazine ANTIQUES also hosted a talk between contemporary artist Peter McGough and curator Ariella Wolens. Since 1980 McGough has worked in collaboration with David McDermott, and they are two of the most intriguing artists of our day. McDermott and McGough have been called “time travelers.” Early in their careers, they immersed themselves in the ethos of the late Victorian world, dressing in period clothing and living without modern conveniences. The history and aesthetics of that era inform their paintings, photographs, and their latest work, an art installation called The Oscar Wilde Temple, currently on view in London.

Our podcast, Curious Objects, presented a panel discussion that was recorded for the latest episode. Curious Objects host Ben Miller chatted with Michael Diaz-Griffith, associate executive director of the Winter Show; Carleigh Queenth, a ceramics and glass specialist with Christie’s; and Emily Bode, a fashion designer. All four are in their thirties or younger and are members of a just-minted community of interest called the New Antiquarians, which champions historical art and antiques. Give a listen to the podcast and hear their thoughts.

You may have noticed that the “Winter Show” is a new name. In its first sixty-four years, the event was known as the Winter Antiques Show. Several longtime exhibitors were not happy about the change. “So now it’s the Winter Show. What do they show?” one dealer grumbled. “Snow tires? Shovels?” As the editor of a publication called The Magazine ANTIQUES, I was expected by some to be likewise put out. But I told them I understood the rationale for the new name. The show no longer places age restrictions on what can be presented, and works on offer in this year dated from antiquity to the present day.

The conversation around the new show name did rekindle a sense of frustration I feel. To my mind, there is no adequate definition of the word “antiques.” If I coined one, put most succinctly it would be: art from the past that tells a story. The “what” of it doesn’t really matter—it could be anything from a painting to a piece of furniture to a pot—nor the kind of story it tells, a personal one or that of a time or place. What matters is that it speaks to us about humanity.

Often the most unassuming things speak the loudest— like the stickpin that antiques dealer Arthur Liverant showed me some months back. Now, a stickpin by its nature is a flashy gent’s accoutrement, but this one was to all appearances a pretty modest example—a brass pin topped by a little red bean, no larger than a teardrop, enclosed in glass. But what a story it tells.

The pin was a gift from Julius Lord to his friend Ezra Ripple. Both served as privates in the Union Army in the same infantry regiment, and both were interned from 1864 to 1865 at Andersonville prison in Georgia. The bean was one that Lord saved out of the pitiful rations served in that notoriously horrific camp. That he forsook even the smallest amount of nourishment speaks volumes not only about Lord’s willpower, but also about his faith that the Union forces would deliver him from that hell. That’s the kind of story antiques tell.

That’s the kind of story we seek to tell at The Magazine ANTIQUES.