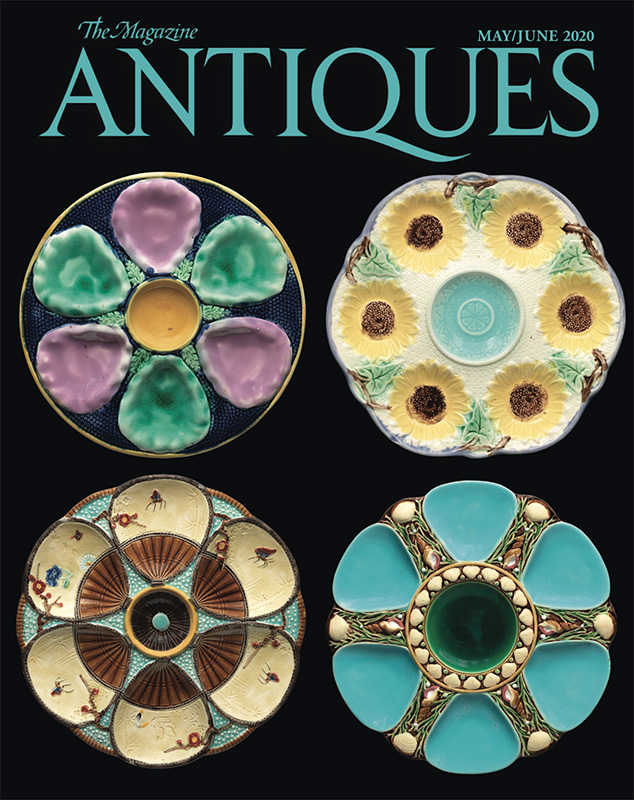 Apart from the sleeplessness, the worst aspect of all this has been the sirens. The wail of emergency vehicles seems almost constant on some days and nights, and the message of pain and suffering implicit in that sound is distressing and dispiriting. This is now part of daily life in New York City in the early spring of 2020 amidst the coronavirus epidemic.

For weeks now, the staff of The Magazine ANTIQUES has been sheltering in place, in the now-familiar phrase. We have worked hard and diligently to bring you this print edition of the magazine, while at the same time producing newsletters, podcasts, and new posts for our website and social media plat-forms. As my illustrious predecessor Homer Eaton Keyes wrote in ANTIQUES in the inaugural issue in 1922, the magazine’s “first obligation is to its readers.”

Our hope is that, along with your enjoyment of the scholarship and artful photographs, the mere fact of holding this magazine in your hands will offer you some small, but welcome and comforting, measure of normalcy in these difficult days. We are grateful to you as subscribers for providing the wherewithal for us to make this publication. We are also deeply thankful to our loyal advertisers. I strongly encourage you to visit their websites, to browse, and perhaps even buy something for your collection. Or just give them a call to chat about your shared love of the arts. Take it from me: they are nice people!

As a reader of this magazine, you are undoubtedly a student of history. The comparisons to the influenza pandemic of a century ago cannot be ignored. Further along in these pages, our editor at large, Glenn Adamson, has insights on that crisis, drawing on his conversation with one of the curators of an exhibition about the 1918–1919 flu at the Mütter Museum in Philadelphia. As Glenn notes, that outbreak has been called America’s “forgotten epidemic,” and it is indeed remarkable, given the toll it took, how scant a mark it left on the culture of this nation. I can’t think of any great novel, or play, or even a painting inspired by the 1918 outbreak created in its immediate aftermath. Did any major US cities raise monuments or memorials to the dead, as they did for those killed in World War I?

Perhaps one of the likely reasons is this: shame. The author of the 2004 book The Great Influenza, historian John M. Barry, cites example after example of pleas for volunteers by public health officials during the crisis of 1918 and ’19 that went unanswered. He quotes the director of emergency aid in Philadelphia, who grew angry at the lack of a response to his petitions for help, and scornful of those who “had delightful dreams of themselves in the roles of angels of mercy. . . . Nothing seems to rouse them now. . . . There are families in which every member is ill, in which the children are actually starving because there is no one to give them food. The death rate is so high and they still hold back.” Just as surely as the medical science of the year 2020 is better than that of 1918, we as a society—as fellow members of the American community—can do better than our forebears did a century ago.

For as much heartache as the howl of the ambulances brings me, there is another sound that can be heard across New York City every day that gives me hope, and a renewed faith in human decency. I first heard it on an evening in late March and I wondered why the heck my neighbors in our Brooklyn Heights apartment building were standing on their fire escape applauding. Folks down on the sidewalk were doing it, too. I discovered that it was our local iteration of a gesture being made for weeks in Italy, Spain, and India: to clap hands to show thanks for the work of nurses, doctors, emergency technicians, and others doing their best to save the sick. But really the appreciation extends to pharmacy and grocery store employees and sanitation workers; to those delivering food, medicine, and the mail—to all who stay on the job and help us cope with this crisis. The applause has become a ritual, breaking out on the dot of seven PM, and is now one of the high points of my day, if one that never fails to bring tears to my eyes.
So do your part. Be careful and be caring. Be generous. Be kind.

Above all, be well.