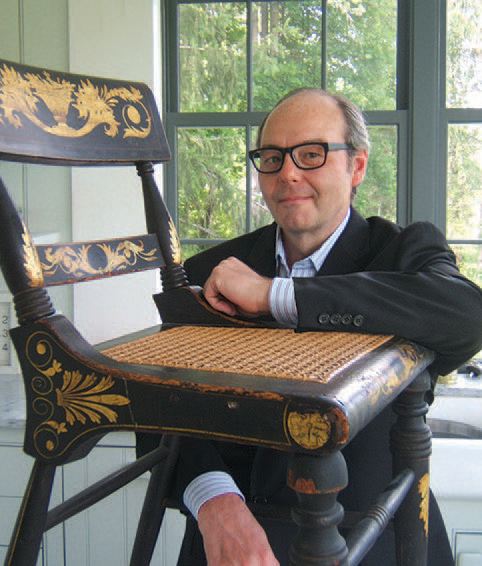 As I write, events at this year’s pandemic delayed edition of the Winter Show art and antiques fair in New York are winding down. We at The Magazine ANTIQUES were honored and delighted to be given the use of an exhibition space at the show in celebration of our one-hundredth anniversary. We’re grateful to East Side House Settlement, the Bronx-based educational and social services nonprofit that organizes and benefits from the show, and our special affection and appreciation go to the fair’s executive director, Helen Allen, and her associates.

Many thanks to the art and design dealers who helped us furnish our booth with pieces that represent the range of our magazine’s interests. Bernard and S. Dean Levy lent a Federal card table and pair of shield-back side chairs; Lillian Nassau LLC provided a Tiffany Studios “Begonia” lamp and a George Nakashima coffee table; a trove of loans from Maison Gerard included an elegant music stand by woodworker/ artist Michael Coffey, a Jules Leleu serving table, and a metal art deco fireplace surround; Hyde Park Antiques contributed a lovely George III worktable; Milord Antiques sent a commodious 1940s inlaid-wood cabinet; and Thistlethwaite Americana provided the centerpiece of our ensemble: an early nineteenth-century Windsor bench.

Silver dealers S. J. Shrubsole and Spencer Marks lent us a Sheffield plate wine cooler and a silver fruit bowl, respectively, while Robert Young Antiques gave us the use of an adorable painted bentwood bride’s box. A tip of the hat to the New York framing company Lowy, which provided the gilded wood frame in which we displayed The Magazine Antiques: The First One Hundred Years, an original painting by artist Andrew LaMar Hopkins that became the fold-out cover of our January/February centennial issue. Andrew kindly flew up from his home in New Orleans to sign fine giclée prints of the painting, which we produced in a limited edition of twenty-five, and to participate in a live edition of our podcast, Curious Objects. Finally, hosannas to interior designer Ralph Harvard, who conceived the pièce de résistance of our booth, and to his associate, Lystra Basdeo, who helped us execute it: the vibrant cloth scrim depicting dozens of great covers from ANTIQUES’ past that covered our walls. “Eye-catching” hardly does the design justice.

This issue sees a changing of the guard in a key department of the magazine. Design historian Glenn Adamson, who joined us as a columnist in early 2016, has left to focus on his curatorial practice and book projects. Glenn, who began his career at the Victoria and Albert Museum, has been much in demand as a curator lately. He recently helped organize shows at the Crystal Bridges Museum of American Art and at the Smithsonian Institution, and he is now at work on two curatorial projects to be mounted, respectively, at the Noguchi Museum and at the great British estate Chatsworth House, and—looking further forward—is helping to plan Design Doha, a new design festival scheduled to take place in Qatar in 2024. Fortunately, Glenn will stay on with us as a contributing editor, so we can all look forward to more of his informed and insightful eloquence.

He passes the columnist’s mantle into more than capable hands: those of Elizabeth Pochoda, who will be familiar to you as a past editor of this magazine, and for her articles in our pages and those of the New York Times, the Nation, and other publications. Her new column, entitled Field Notes, debuts in this issue. Betsy, as she is known to friends and colleagues, will act as a sort of cultural flâneur—strolling along the boulevards of the world of art and antiques, observing, commenting, and no doubt veering off into side streets that capture her interest. “I’m a person of promiscuous enthusiasms in the arts,” she explains. “Surprise me and I’m delighted. Overturn a longstanding opinion or prejudice, and I’m happier still. All of which makes it difficult to predict exactly what I will do, except to say I hope to surprise and delight the readers of this magazine.”

I, for one, am more than confident those hopes will be realized. Welcome home, Betsy.