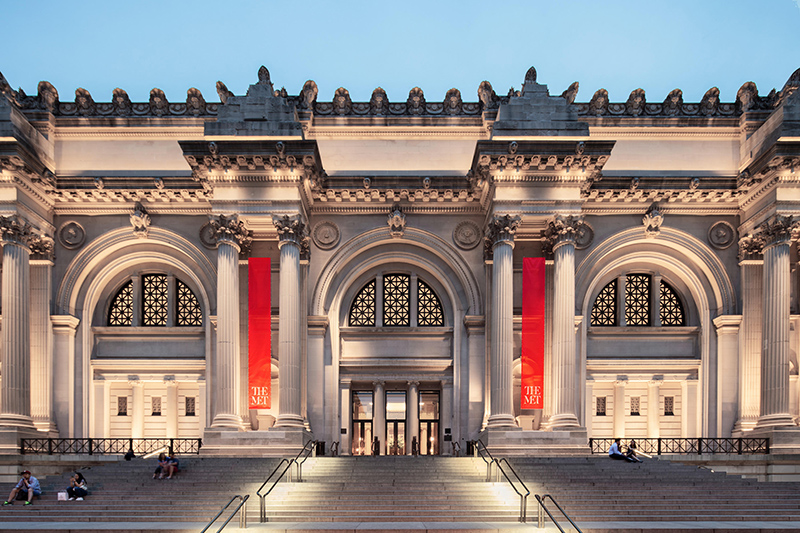 The Great Hall of the Metropolitan Museum of Art is one of those famously busy New York City spots, like Grand Central Terminal and Times Square, or Macy’s during an after- Thanksgiving sale. In happier days on a typical weekend or holiday at the Met, long lines of people snake towards the ticket windows in the Great Hall, many others are queued up for the coat checkrooms, and the crowd around the information booth is two and three deep.

I wondered how cultural institutions, desperate for attendance, were handling the restrictions forced by the coronavirus pandemic, and took a stroll along New York’s “Museum Mile” on Fifth Avenue. After closing for six months, the Met reopened in late August at limited capacity, requiring visitors to reserve timed tickets in advance. Face masks and social distancing are mandatory; frequent use of hand sanitizer is encouraged; your temperature is taken at the entrance; and the checkrooms are closed. On a recent holiday Monday, a line of people stretched down the front staircase and along the sidewalk for half a block. In the Great Hall, the crowd could more reasonably be described as numbering in the dozens, rather than the usual scores, or even hundreds. Still, all-in-all attendance was rather robust at the Met. Given the special interest our magazine has taken in the exhibition, it was particularly gratifying to see the many people in the gallery displaying Jacob Lawrence: The American Struggle—if a bit discomfiting in terms of social distancing.

Elsewhere on Fifth Avenue, the story was not the same. There were no lines to enter the Guggenheim Museum, nor the Museum of the City of New York. The Cooper-Hewitt design museum is still closed, as is the Neue Galerie. (The Frick Collection is closed for renovations and will open temporary quarters early next year in the brutalist Marcel Breuer-designed building that was formerly home to the Whitney Museum. Talk about a strange marriage of convenience.) Despite the facts that admission to the Jewish Museum is free this fall and that it is hosting several compelling exhibitions—I highly recommend the show We Fight to Build a Free World, curated by artist Jonathan Horowitz—it seemed, sadly, as if the security guards there outnumbered the visitors that day.

Fundraising has also presented special challenges for museums amid the pandemic. Like our magazine’s advertisers—who have met the test with aplomb—they have had to take a crash course in online marketing this year. The American Folk Art Museum usually hosts a swanky gala every fall, but this year, in concert with the website Artsy, they instead presented a benefit auction of work by contemporary artists. Andalusia, the historic estate on the Delaware River just north of Philadelphia that was once home to the Biddle family, has as its main annual fundraiser a dinner-dance called “Cabaret by the River,” a highlight of the city’s autumn social calendar. This year the event was held virtually. Entertainment was provided by Tori Scott—a gingery performer of the Ethel Merman school—who offered the classic cabaret mix of comic patter and song from her piano accompanist’s apartment. “The event did better than we anticipated,” says Connie Houchins, Andalusia’s executive director. “We pretty much matched the usual figures because expenses were much lower; we didn’t have to worry about things like table settings and catering.” She adds: “I wouldn’t want to do it this way every year though. We’ll be glad when things get somewhere near back to normal.”