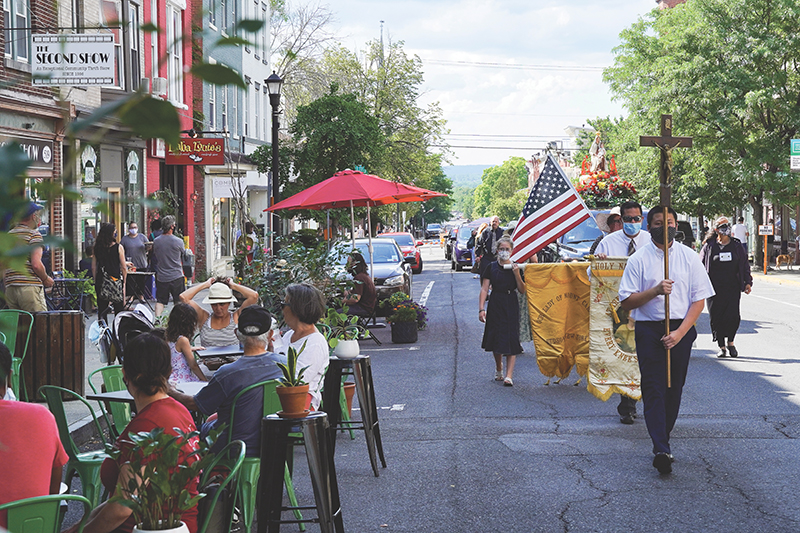 Faithful readers will know that The Magazine ANTIQUES has a special affection for the small city of Hudson in upstate New York. We have participated in numerous events there, and have hosted tours in the town and the surrounding area. Hudson sits at a geographical sweet spot for those in the magazine’s community of interest. Close by are the mountainous vistas made famous by the painters of the Hudson River school. Just a few miles away, Frederic Church built Olana, his magnificent estate with its living artwork of a landscape; and his teacher, Thomas Cole, lived and worked just across the river in the town of Catskill. What’s more, the countryside around Hudson is dotted with historic eighteenth- and nineteenth-century houses, many built for members of the Livingston family and written about in our pages, such as Rokeby, Edgewater, and Forth House (which you can visit on page 108).

Perhaps the more significant reason for our magazine’s esteem for Hudson is its reputation as the “Town Saved by Antiques.” In the late 1980s and into the ’90s, New York City–based antiques and art and design dealers began to arrive in Hudson, fleeing high Manhattan commercial rents and drawn by the affordable shopfronts in a stylistically diverse array of nineteenth-century buildings, preserved by benign neglect, on Warren Street, Hudson’s main drag. At the same time, second-home buyers from the city—either priced out of the vacation enclaves in the Hamptons, or put off by that area’s ever-increasing glitz—found their way to the upper Hudson valley. Those new homes needed to be furnished, and within a few years, Warren Street was vibrant again, and became even livelier as arts organizations and new restaurants began to thrive. The Hudson experience—to a greater or lesser extent—has since been repeated in numerous once-moribund towns, particularly in the Northeast.

And now Hudson is blazing a trail once again. In the midst of the global coronavirus pandemic, the town put into operation a plan that has breathed new life into the business district and the social life of the community by using this one weird trick: cooperation.

Since midsummer, Hudson has conducted a program called “Shared Streets.” During prescribed hours on weekends, businesses have, by permit, been allowed to take over parking spaces on Warren Street. Restaurants have used the slots to set up outdoor dining areas, while some shops have created alfresco displays of their wares. Meantime, automobile drivers have been enjoined to drive at five miles per hour, allowing pedestrians to walk in the street to maintain social distancing.

The program was the brainchild of the leadership at Hudson Hall, a performing arts center and exhibition space housed in a stately brick building on Warren Street dating to 1855 and known as the Hudson Opera House. Having formulated their own plan for reopening with all-reserved tickets (which are free), and timed entries in limited numbers, Tambra Dillon, Hudson Hall’s executive director, and Sage Carter, its general manager, turned their attention to the community at large. “We wanted to develop a plan to help businesses expand while ensuring that Hudson opened safely,” Dillon says. “Visitors are crucial to Hudson; we have to keep people coming. But if they can’t all be crowded on the sidewalks, where do they go?” Thus, shared streets.

Dillon and Carter delivered a proposal to the mayor’s office that was refined with the help of Kaja Kühl, a professor of architecture and urban planning at Columbia University, and Peter Spear, a local urban planner, and then—after a test run—implemented by mayoral executive order. “No plan would be perfect. Change is tough,” Dillon says. “But eighty percent of the people in town love it. On weekends, Warren Street has a European, market-style flavor to it now.”

“I would say it’s working very well,” says Jennifer Arenskjold, a longtime Hudson antiques dealer. Her own and many other shops set up tableaux in the street, often featuring garden furniture and ornaments. Stores have installed hand sanitizer stations at the door, and, per state regulations, require that visitors wear masks and keep a distance from one another. “People have been very respectful of the rules,” Arenskjold says. And commerce has been surprisingly robust. “It’s much better than it could have been, considering,” she adds. “The streets are very busy. Along with our regulars, we’ve seen a lot of new people—young people who have bought homes in the area. And they are shopping.”

Sounds like a win-win, when folks can follow a few simple guidelines, look out for each other, and work together. Is that so hard?