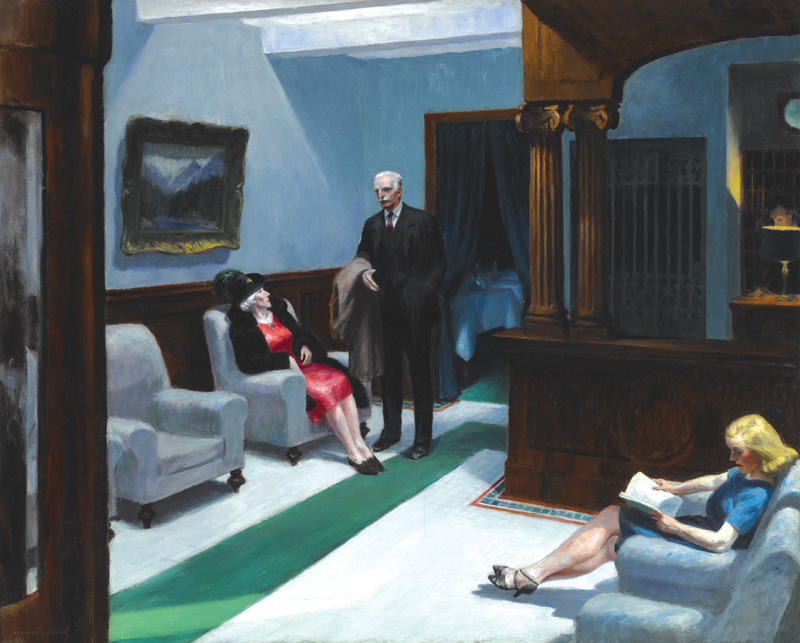 The American artist Edward Hopper had a deep personal and professional interest in hotels, motels, tourist homes, and the wide scope of hospitality services—including the vast infrastructure of restaurants, entertainments, and staff servicing these institutions. From 1920 through 1925 he worked as a commercial illustrator for two popular hotel periodicals, and from the Great Depression through the Cold War years, he augmented his knowledge of hospitality services as a frequent guest in several lodgings on the long-distance automobile trips he took with his wife, the artist Josephine (Jo) Hopper. Beginning in the mid-1920s and through the early 1960s, Hopper explored hospitality services subjects in paintings, watercolors, drawings, and prints. Sometimes he titled these works as a “hotel” or “motel,” but just as often he did not. More than half are composites of sites, with no small amount of invention and artistic license.

In the early 1920s Hopper produced illustrations and covers for Tavern Topics, published and distributed by the Waldorf Astoria hotel in New York, and in 1924 and 1925, he drew eighteen brilliantly illuminated covers for the trade magazine Hotel Management (Fig. 2). Edward and Jo lived much of their lives in Manhattan, which, like other regions across the country, experienced a massive hotel-building boom in the first quarter of the twentieth century. Hotel-generated revenue fell by more than 25 percent in the Depression years of 1929 through 1935, but this was hardly a deterrent to Hopper.

Between the World Wars, Hopper produced at least two etchings and five paintings synthesizing architectural components of various urban hotels—some of which he knew from living in New York, while others harken back to images and themes suggested in the pages of Hotel Management during the years he produced its covers. Depicting a seated woman reading a railroad timetable in modest quarters, Hotel Room (Fig. 4) suggests a before-and-after relationship with the Hotel Management cover from May 1925 (Fig. 3).2 It’s as if the same figure, the woman in the painting (Jo likely modeled for both) has taken off her pink dress and cloche hat, seen in the magazine cover illustration, to reveal a peach slip. “Railroad officials,” reported a Hotel Management article in December 1924, “tell us that one-fourth of the traveling at the present time is done by women and our records show that the majority of these women are traveling alone.” Hopper depicted women alone in rental structures in several compositions over the following four decades.

Looking out from the vantage point of their home at 3 Washington Square North in New York, the Hoppers would have encountered several hybrid rental structures, including a ten-story campanile at 53 Washington Square South. Designed by McKim, Mead, and White and built in 1893, this was actually part of the Hotel Judson, the proceeds from which benefitted the colonnaded Judson Memorial Church next door. Hopper captured this view in the painting November, Washington Square, which he commenced in 1932 and to which he added sky components in 1959 (Fig. 9). He also produced a related, expressively modeled drawing of the site (Fig. 10). The Hoppers’ friend, artist John Sloan, lived at the Hotel Judson for eight years, until he was evicted by New York University (which had earlier annexed the property).4 The three-story, burnt orange structure at far left in the painted version is the House of Genius boardinghouse, at 61 Washington Square South, which, at various times from the 1910s through the 1930s, housed artists, authors, poets, and musicians, including Theodore Dreiser, John Dos Passos, Eugene O’Neill, and Alan Seeger.5

Apartment hotels are among the structures figuring in the architectural types Hopper synthesized in selected compositions such as House at Dusk (Fig. 6). Popular, urban lodging houses offering short-term leases, these were essentially apartments but with the amenities of a hotel. These middle-class hybrid spaces contained multiple units with shared bathrooms and frequently contained sitting rooms with pianos (seen in Room in New York [Fig. 7]) and offered a restaurant, a doorman, and daily maid service (as suggested in Apartment Houses [Fig. 5]).6 The Hotel Judson may have functioned in this manner for Sloan and other tenants there.

The result of at least nine study drawings, Hotel Lobby is probably Hopper’s most comprehensive treatment of the hospitality services theme (Fig. 1). Seated in an upholstered chair, a young woman in a blue dress reads her book, reclining at angles that mirror those of her more mature counterpart across the foyer. On the back wall, a view through dark drapes in an open doorway reveals a restaurant with linen-covered tables. The lines formed on the floor reflect period design principles treating carpet as a means to guide crowds and determine the placement of furniture. Even more important for crowd and climate control is the revolving door—cropped at left in Hotel Lobby. For all Hopper’s urban architectural imagery, revolving doors appear in just two of the studies for this work and in only one other painting (Sunlight in a Cafeteria, 1958, in the Yale University Art Gallery). Variations of the revolving door had existed since at least the mid-nineteenth century, but modern improvements concerned the quest to regulate ventilation and keep temperatures constant in public settings. Allowing no air in from the outside, a revolving door was, in the words of an early promoter, “always closed.”7 This helps explain how Hotel Lobby, a painting finished in January of 1943, and featuring a couple in winter clothing, could also depict a coatless woman in a short-sleeve dress.

Edward and Jo began renting summer cottages in South Truro on Cape Cod in 1930 and would buy property and then build a home there a few years later. As with vacation areas in the rest of the nation, by the 1940s Cape Cod possessed a number of tourist homes—furnished single-family dwellings offering rooms for short-term stays, often seasonally. Deeply interested in vernacular, domestic architecture, Hopper painted several tourist homes over his long career, but he seems in retrospect to have been particularly interested in one such residence in Provincetown on Cape Cod. He spent several long nights parked before the structure, making drawings, resulting in a painting that offers a view into the front rooms of the house (Fig. 8)—apparently the inhabitants wondered what the artist was doing, sitting there in his Buick sketching away.8

The Hoppers took long periodic road trips in search of subject matter across New England, the West, and Mexico, among other locales. On these jaunts, they stayed at tourist homes and, eventually, as Edward’s income increased, in motels and motor courts. Portions of Jo’s diaries—covering the mid-1930s to the 1960s, and recently given to the Provincetown Art Association and Museum—reveal page after page of extended descriptions of these lodgings and the couple’s feelings about them. One of the more colorful and lengthier of these entries discusses their stay at the Weseman Motor Court in El Paso from December 15 through December 22, 1952. Hopper painted Western Motel during a fellowship at the Huntington Hartford Foundation in Pacific Palisades, California, but the canvas also evokes Jo’s descriptions of and contemporary press discussing lodgings in El Paso (Fig. 13). Close to the Weseman on Route 80 (present day Interstate 10) was a string of motels appropriating popular cowboy culture and western lore—among these was the Western Motel, for which Hopper’s painting may be named (Fig. 12).9

The Hoppers took five long trips to Mexico between 1943 and 1955, on which they also visited several regions in the United States; they traveled by train in 1943, but on the other jaunts they traveled by car. They frequently sized up a locale based on the quality of their lodgings and the view offered by their room and from the structure’s roof. Much of what we know about Hopper’s time in Mexico comes from the couple’s correspondence on hotel and motel letterhead and postcards. Dating from his first trip to Mexico, Saltillo Rooftops enlists the stovepipe of his hotel rooftop at the Guarhado House (where he and Jo stayed) in the foreground to balance the unfolding span of the Sierra Madre mountains in the background (Fig. 11). In Monterrey Cathedral, he returns to his practice of using his lodgings (in this case the Hotel Monterrey) as a framing device to synthesize a visual inventory of hotels and other structures—the cropped signage for the Hotel Bermuda appears at lower left (Fig. 14).

Hotels and motels may provide a useful metaphor for understanding much of Hopper’s work in general. He took for granted that hotels and paintings offer temporary experiences, serve multiple individuals, and are, ultimately, highly crafted illusions. Hopper viewed his art—his paintings and watercolors in particular—as sites in which to invest ourselves temporarily (he certainly did not dwell in them for very long) and upon which to muse later with equal parts introspection and nostalgia. Sixty-nine of these paintings, watercolors, drawings, prints, and magazine covers are featured—along with thirty-five works on the theme by other artists—in the exhibition Edward Hopper and the American Hotel at the Virginia Museum of Fine Arts in Richmond.

It is perhaps fitting that the exhibition is organized by and makes its debut there. The Hoppers visited Richmond on several occasions. He probably first visited the VMFA in March 1938 as the lead juror for its First Biennial Exhibition of Contemporary Paintings. His own art would be featured in subsequent biennial exhibitions. Hopper returned to the museum in 1953 for a Judge the Jury exhibition, around the time the museum purchased House at Dusk (Fig. 6). A photograph from this visit shows Hopper and Richmond artist Bell Worsham standing before Hopper’s painting Early Sunday Morning (Fig. 2). Following up on some spirited communication, via the artist’s dealer Frank Rehn, regarding the couple’s lodgings on this visit, the museum’s director, Leslie Cheek Jr., assured Hopper, “While in Richmond you will be quartered at the Jefferson Hotel, a Beaux Arts structure I believe you will enjoy.”10 There were plenty of hotels in which Cheek could have placed Hopper, but he made sure that the artist was staying at an establishment recognized as the “finest in the South.”11

Edward Hopper and the American Hotel, on view at the Virginia Museum of Fine Arts in Richmond to February 23, 2020, will then travel to the Indianapolis Museum of Art at Newfields from June 7 through September 13, 2020.

Leo G. Mazow is Louise B. and J. Harwood Cochrane Curator of American Art at the Virginia Museum of Fine Arts