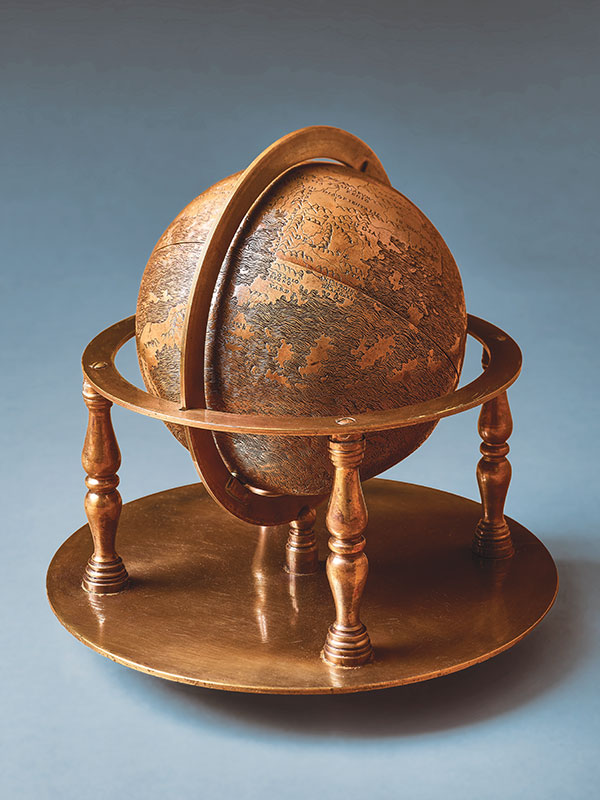 We at The Magazine ANTIQUES are extremely proud to be part of the training that has launched many of our alums into careers in the decorative arts: as curators, editors, writers, researchers, and scholars. Recently, Sara Spink, who interned with us in 2011, was involved in organizing the Polonsky Exhibition of the New York Public Library’s Treasures, the library’s first permanent exhibition, named for philanthropist Leonard Polonsky. It is a dazzler. We asked her to choose a few items she thought would appeal to our readers. Here is what she wrote:

What do a lock of Beethoven’s hair, a set design for the musical In the Heights, a rare Manet lithograph, and the earliest money in New York City have in common? They are all featured in the Polonsky Exhibition of the New York Public Library’s Treasures. Drawn from across the library’s research divisions, the exhibition makes publicly accessible—in many cases for the first time—some of the rarest and most unexpected items in the library’s holdings.

Take, for instance, Charles Dickens’s desk, complete with his chair, writing slope, lamp, and calendar. How did this wind up in midtown Manhattan? The assemblage came here from Gad’s Hill Place, Dickens’s primary residence for the last decade of his life. After the author’s death, his sister-in-law Georgina Hogarth sold off his belongings. Henry W. and Albert A. Berg subsequently purchased this ensemble from a dealer and donated it to the library, along with the rest of their extensive collection, in 1940. In that same year, New York City Mayor Fiorello La Guardia visited the library and sat in Dickens’s chair, sinking right through the caning of the seat. No one has been allowed to sit in it since, and the caning is the only facet that is not original to this furniture. Displayed nearby are Dickens’s personal reading copy of A Christmas Carol and his paper knife, rather surprisingly fashioned from the taxidermied paw of his beloved cat, Bob.

Elsewhere in the gallery, visitors encounter the Hunt-Lenox Globe, one of the earliest surviving terrestrial globes, and one of only two medieval or Renaissance-era maps or globes bearing the now-famous motto “Hic Sunt Dracones,” or “Here be dragons,” whether in reference to the mysteries of the unknown world or to the Komodo dragons found in the Indonesian archipelago. It is one of the earliest cartographic depictions of the Americas, namely South America— here denoted as “Mundus Novus” and “Terra Brazil”—and the islands of Cuba and Hispaniola. It depicts sea monsters and shipwrecks, but no indication of North America.

Just a few years after the globe’s creator set his burin cutting tool to copper, Maximilian I commissioned Albrecht Dürer to design The Triumph of Maximilian (Triumphal Arch). This colossal undertaking, at more than eleven by nearly ten feet, is still celebrated as one of the largest prints ever created. Involving 195 wood blocks that took over two years to carve, the intricate details of the composition reflect the emperor’s military accomplishments, episodes from his private life, and his lineage, which he traced back to Hector of Troy. The copy on display is from the 1799 third edition, printed more than 280 years after the first. By the time of the printing eighteen blocks were missing, and the individual who arranged the reprint re-created them with etchings. Visitors who look closely can locate those areas by their slightly lighter appearance.

Many pieces in the exhibition reward close examination, but we hope they collectively speak to the great range of materials, histories, and ideas that can be found among the library’s collections; the items on display are but a few of our many treasures.