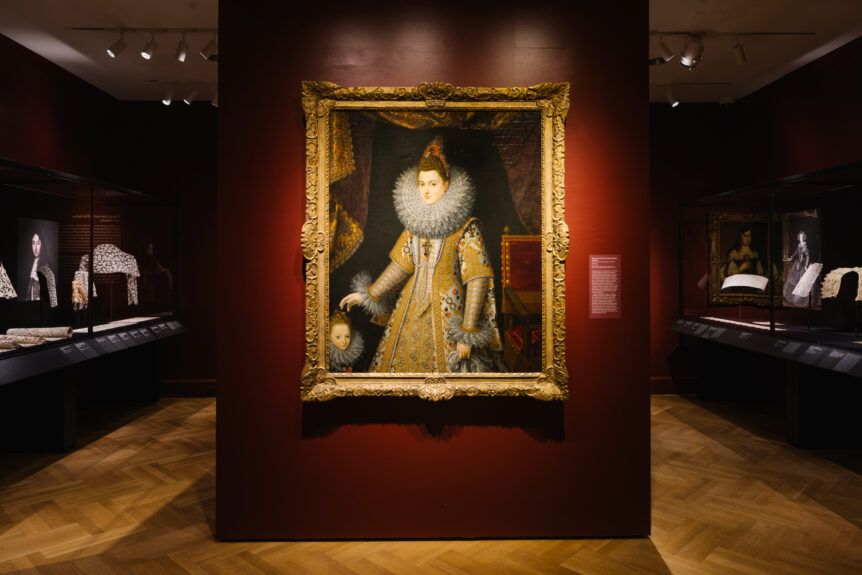 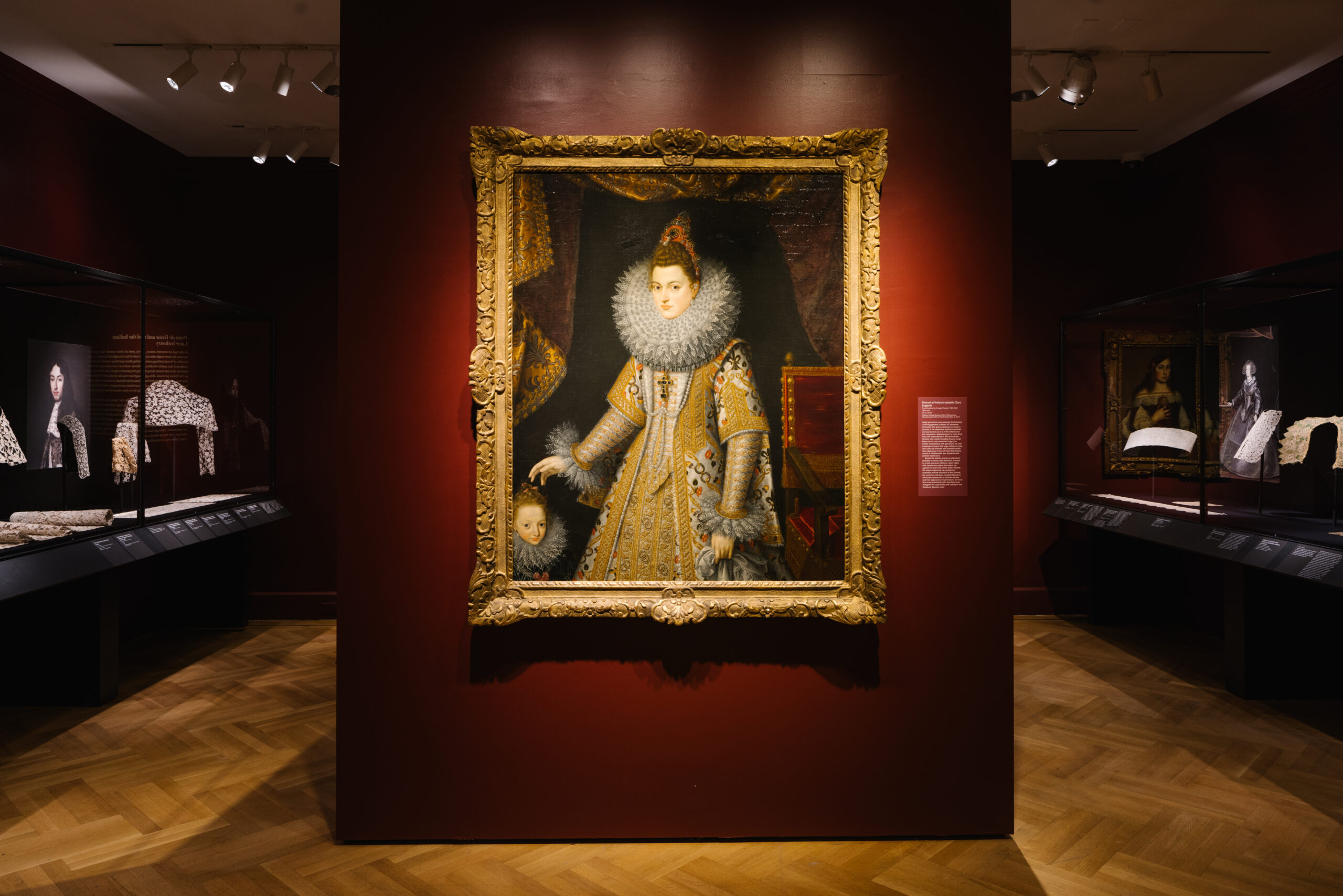 Portrait of Infanta Isabella Clara Eugenia by Frans Pourbus the Younger (1569–1622), c. 1599– 1600, from the Williams College Museum of Art, Williamstown, Massachusetts, gift of Leopold Ilke. It is on view in Threads of Power: Lace from the St. Gallen Textilmuseum at the Bard Graduate Center Gallery, New York. Photograph by Da Ping Luo, courtesy of the Bard Graduate Center, New York.

Did you ever wonder how Ruth Bader Ginsburg’s use of distinctive collars with her judicial robes ever came about? Well, she once explained it like this: “You know, the standard robe is made for a man because it has a place for the shirt to show, and the tie. . . . Sandra Day O’Connor and I thought it would be appropriate if we included as part of our robe something typical of a woman. So I have many, many collars.” Any number of her collars were of lace, like the one shown below, commissioned by Columbia Law School to celebrate the twenty-fifth anniversary of her investiture into the US Supreme Court. It doesn’t happen to be in the Bard Graduate Center’s show Threads of Power: Lace from the Textilmuseum St. Gallen (on view to January 1, 2023), but it provides a segue to this stunning exhibition. We spoke to Emma Cormack and Michele Majer, co-curators of the show and co-editors of the accompanying catalogue, about the wearers and makers of this luxurious textile.

Handmade lace became an indicator of power, wealth, and status in Europe as early as the sixteenth century. Just look at the many portraits of royalty and members of the aristocracy from then through the eighteenth century. At Bard, a good example is the large-scale oil of Infanta Isabella Clara Eugenia by Frans Pourbus the Younger that introduces the gallery focused on lace fashions at the Habsburg court. Majer says the portrait was “likely commissioned at the time of her 1599 engagement to Albert VII, archduke of Austria, and, reflecting her prestige as the daughter of the Spanish king, Philip II, records Isabella’s sartorial splendor in meticulous detail,” including her impressive millstone ruff edged with costly delicate needle lace, and her lace-trimmed cuffs and handkerchief. 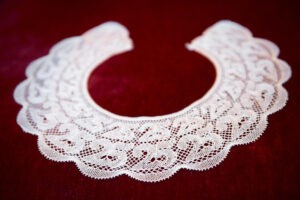 Collar made by Elena Kanagy-Loux (1986–), 2018, to celebrate the twenty-fifth anniversary of Ruth Bader Ginsburg’s investiture in the US Supreme Court. Photograph courtesy of Columbia Law School, New York.

Majer notes that the amount of lace trimming on Isabella’s ruff alone would have required weeks, or perhaps months, to create. Unlike those who wore lace, the women and girls who made it, working in convents, charitable institutions, workshops, or at home for very little pay, had no status and are virtually unknown. Though the association with status continued, mechanization in the nineteenth century made lace more widely available, its manufacturing taken over by men, while women still did the finishing. But factory lace faced something of a backlash, leading to the idyll of the rural, domestic female lace maker creating more individual, artistic pieces. Even so, by the early twentieth century, handmade lace had gone into a seemingly irreversible decline.

Fast-forward, then, to the twenty-first century and Bard’s exhibition. Drawn largely from the renowned collection of historical lace in the Textilmuseum in St. Gallen, Switzerland, the show also includes pieces from numerous American collections, among them more contemporary examples. Fittingly, the show opens with a specially commissioned collar made by Elena Kanagy-Loux, who is both a maker (she created Ginsburg’s twenty-fifth anniversary collar and is the co-founder of the Brooklyn Lace Guild) and a scholar of lace, and who worked with the curators on ways to consider the lives and work of lace makers in the past. Kanagy-Loux has said, “Creating lace is magical; it’s almost like a form of witchcraft.” If you want to see this sorcery in action, visit the Lacemakers Studio at Bard on Sunday afternoons between 1 and 5 pm during the run of the show: members of the Brooklyn Lace Guild will be there demonstrating their magic.