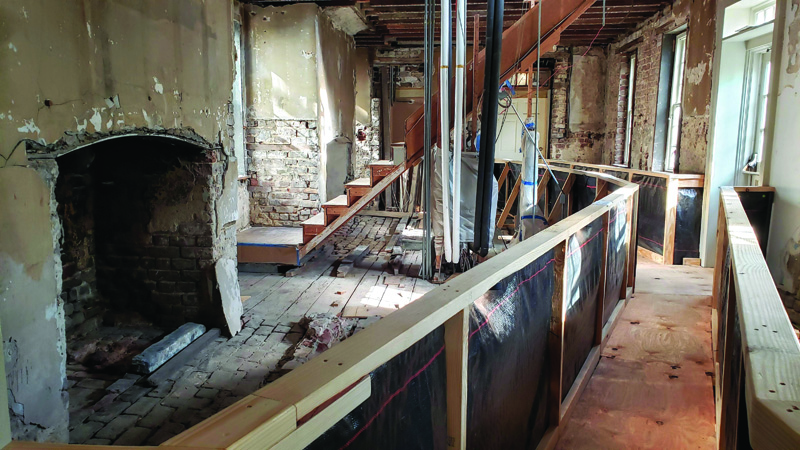 It’s usually not good to discover rats’ nests in your walls, but a serendipitous turn of events in Charleston has revealed what a treasure they can hold. It began when sunlight bouncing off a door in her office in the kitchen house of the 1808 Nathaniel Russell House prompted Lauren J. Northup, director of museums for the Historic Charleston Foundation, to speculate that perhaps the door was original to the structure. The ensuing investigation revealed that her hunch was right—and, in fact, that some 85 percent of the original building fabric survived behind and beneath twentieth-century flooring and drywall. In the process of removing the later materials, the bits and pieces scavenged by rats and built into their nests, amazed the team. As Northup says, “we have now learned more about the life of the enslaved people than is known about the white family.”

The objects we have uncovered tell incredible stories about the minds and hearts of the people who lived in bondage at the Russell House. We may not have a diary or letters, but we have objects like a fragment of a reading primer—found in an 1830s context, when it was illegal for enslaved people to read and write. Is the primer fragment a tiny scrap of resistance, or was it condoned by the white family? Arguably, the most fascinating object we uncovered is a chandelier or girandole crystal that had been intentionally broken and shaped to resemble a naturally occurring crystal. It is likely all that remains of a West African spiritual practice, carefully placed behind the original baseboard as a way to connect with and seek the protection of one’s ancestors. Another object we found informs our knowledge of the furnishings in the main house: a fragment of a nineteenth-century painted floor cloth, sandwiched between the original wood floor and a floor installed sometime around 1918. This grand and high-style object would have begun its life in the main house, and as it became worn it was evidently cut down and repurposed until this last remaining scrap made its way to the kitchen house.

What are the next steps?

We finished removing the modern building materials early this year and are now writing reports and planning our restoration and interpretation. There are many stories we could tell, but we hope to focus on the history of southern foodways and the many contributions of free and enslaved cooks.

Can you briefly describe the history of kitchen houses in Charleston? Do many still survive and will you have the opportunity to dig into their rats’ nests?

The city of Charleston was built on the backs of enslaved people, and the structures that housed them are still very much present in the landscape, though many were the first to be adapted (gutted) in the twentieth century to make way for modern conveniences. If you consider what we have uncovered from just one site, imagine what remains across the city yet to be discovered. It’s pages upon pages of a history book just waiting to be written . . . if we can keep them from being gutted in the meantime.

What other programs have you launched to further understanding of enslaved life?

I have always been interested in marginalized histories, and while we were doing an acceptable job of interpreting slavery at our Aiken-Rhett House, the narrative needed more research and focus at the Russell House. My first project was the development of a mobile app that provides tours of both of our museums as well as a history of Charleston, with an emphasis on the marginalized and untold history of the city.

To develop the content we collaborated with New York–based consulting firm Museum Hack. Throwing three razor-sharp New Yorkers into the mix of a traditional southern house museum was not unlike dousing a campfire with lighter fluid; sounds scary, but it was precisely the energy we needed. The app’s re-imagined audio guides allow visitors to take a deep dive into a particular topic (the history of textiles, for instance, or paint analysis, archaeology, or decorative arts).

The guiding principle of the app project was to tell underrepresented stories from Charleston’s history: African American history features prominently, but we also focused on women’s history, LGBTQ history, social justice narratives, and current contentious preservation issues such as Confederate monuments and sea-level rise. To date, the app has reached just over a million visitors since its debut.