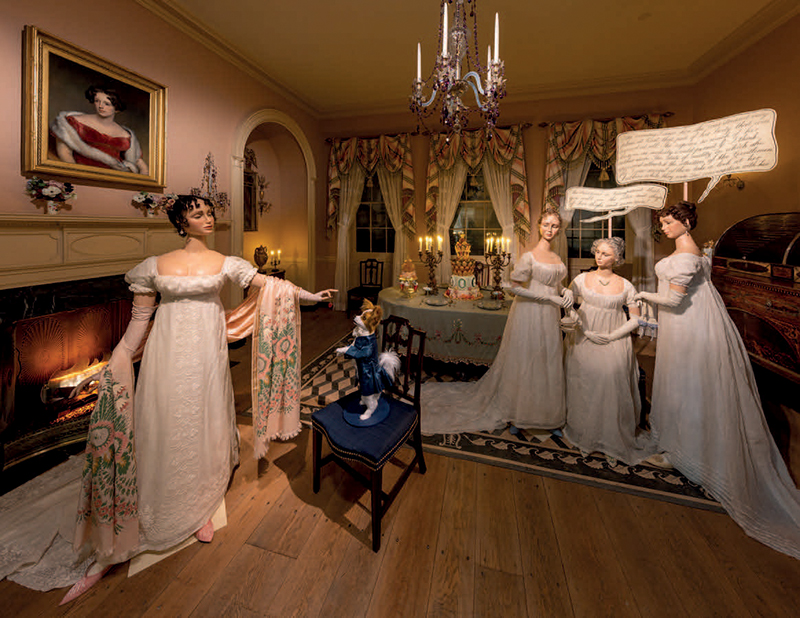 Think red carpet, and Hollywood springs immediately to mind—followed quickly, perhaps, by “fashion’s biggest night out,” the Met Gala, held annually to benefit the Metropolitan Museum of Art’s renowned Costume Institute. This year the two come together, and for our readers it’s a particular treat. In thirteen of the American Wing’s period rooms, nine leading film directors create “cinematic vignettes,” using clothing primarily from the Costume Institute’s collection, to tell the stories of the rise of American fashion. Here we present a peek at a few of the rooms. You can also read about Chloé Zhao’s intervention in the Shaker Retiring Room in Elizabeth Pochoda’s Field Notes.

French fashion’s long influence in America is perhaps best exemplified by the high-waisted dresses with narrow silhouettes of the Empire period, as seen in Autumn de Wilde’s “moment” in the early nineteenth-century Baltimore Dining Room. The figure at left is dressed in a French gown with a low-cut bodice worn by Elizabeth Patterson Bonaparte, daughter of a prosperous Baltimore merchant and briefly the wife of Jérôme Bonaparte, younger brother of Napoleon. The figures at right wear more modest American gowns of the same period. Here, as in the project as a whole, De Wilde, the director of the 2020 film Emma (acclaimed for its historically accurate costumes), creates a sense of humanity that period rooms largely lack. “Being human is a very messy business,” she observes. “Drawing inspiration from early nineteenth century caricatures and early nineteenth-century gossip, my team has sculpted facial expressions, poses, food, pets, and vermin to bring to (still) life” the story of Elizabeth Bonaparte. Snubbed socially, she detested “prudish American fashion and dares to show the fullness of her breasts (as well as the occasional nipple),” as she “waits in vain for Jérôme Bonaparte to make their son a French royal.”

Taking star turns in two of the period rooms are two long-overlooked Black dressmakers—Fannie Criss and Ann Lowe. In the Richmond Room, we find Criss “during the fitting of a dress for client Ellen Clark Wallace,” says Regina King, director of One Night in Miami. . . . “Reimagining the context of Criss’s career, I have presented her in one of her own designs—as her own muse, and a muse for her clients. Elements of the room represent Criss’s history and future. The trees and butler, dressed in livery, represent her parents’ and ancestors’ lives as enslaved people. . . . [H]er apprentice seamstress represents the future of Black success and self-determination.” Ann Lowe designed dresses for some of the most prestigious families in America. Her work included the wedding gown Jacqueline Bouvier wore for her marriage to John Fitzgerald Kennedy and the gown Olivia de Havilland wore for her Academy Award win in 1947. Even so, the racial bias of the time meant Lowe received limited public recognition for her creations. Enjoy her gorgeous gowns in the Renaissance Revival Room.

“Create a one-frame movie in a period room?” quips Martin Scorsese. “A great opportunity and an intriguing challenge.” His remit: a notoriously difficult architect and an equally intractable fashion designer. For the mid-century Frank Lloyd Wright Room, “one of the most beautiful I’ve ever seen,” he says, and the “extraordinary dresses” of Charles James, “I needed to find an emotional situation that suggested a story, many stories, and that could be felt across the length of that room, in the stances of the men and women, in what or whom they’re gazing at. . . . What happens before our one-frame movie? And after? My hope is that people will come away with multiple possibilities unfolding in their mind’s eye.”

Ready for your close-up? Get to the Met pronto.