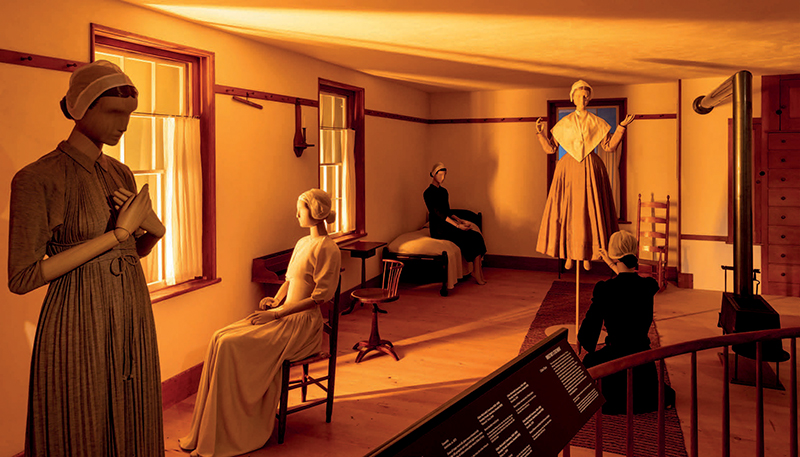 The golden rule of reputation in New York goes something like this: an opening round of applause must inevitably be followed by a passing kick—if not something harsher. And so it was with the Commerce Inn, a tiny Shaker-inspired restaurant in the city’s scenic West Village, where a beloved colonial tavern has been restored with beadboard ceilings, spindle-back chairs, and peg rails by Jody Williams and Rita Sodi, well-known chefs who spent several years studying Shaker folkways and foodways. High praise for both atmosphere and improvisations on Shaker beans, chowders, and spoon bread inevitably called forth an inquisition of authenticity: “Nay,” declared Brother Arnold Hadd of Sabbathday Lake, Maine, one of the only two remaining Shakers, who was interviewed via Zoom about the recipes. Revealing that his favorite food is veal Marsala with white spaghetti, Brother Hadd went on to express his concern about an impending marginalization and misunderstanding of the Shakers. That surprised me since there has been little else in the more than two hundred years since Mother Ann Lee and her band arrived on these shores.

There have been many studies of the sect, but from their very beginnings the Shakers have been used, abused, fetishized, and merchandised: in their early years they drew chastity gawkers eager for a glimpse of a celibate sect and its ecstatic dancing; they have always attracted sentimental egalitarians on vacation from private property; the marketplace continues to bestow the dubious and irrelevant complement of modernity on their excellent furniture; and the quotient of celebrity collectors remains high. Next to much of this, an enterprise like the Commerce Inn struck me as healthy, respectful and, I can report, delicious.

But are we allowed to pick and choose from the past? Are we allowed to have Shaker beans and apple crumble without celibacy and communal property? Of course we are, but that is a far different matter from getting close enough to the past to understand what we do not understand, to get beyond this pawed over Shaker culture to investigate our fascination with it. If I learned anything from my early years as a scholar of the Middle Ages, I learned how fruitful it is to accept the mysteries that reside in habits of mind we no longer share, to look at ourselves and gauge our distance from the past before trying to draw closer.

In pondering the Shakers, I ran across a recent book by historian Kara M. French that shifts the focus from peg rails, whirling dance patterns, and the evolution of Shaker-made objects to the outside world and its reactions to the sect in its early days. Against Sex: Identities of Sexual Restraint in Early America examines the Shakers alongside American monasteries and convents of the period, as well as the followers of the sexual reformer and health-food guru Sylvester Graham (1794–1851). It’s an odd triumvirate. But when French turns the focus away from these communities’ habits and beliefs to the responses they elicited from the society at large we begin to see our history reflected in theirs.

I will greatly shortchange this scholarly work with a few examples. If you consider, as French does, the legislative efforts to declare Shaker men “civilly dead” in the eighteenth century you begin to see how threatening celibate masculinity was to the status quo. Women were supposed to be passionless, but for a man to choose celibacy and to give his property over to the control of others “effeminized him and defied the ideal of the early, republican yeoman farmer.” Conspiracy theories and moral panic ensued: Shakers were accused of plotting to depopulate America; rumors of infanticide, of castration, of drink and debauchery flourished. There were similar attacks on convents as well as riots to protest Sylvester Graham’s lectures for giving women sexual agency in marriage.

From the eighteenth century to the eventual commodification of all things Shaker in the nineteenth was a long but not so strange trip. This is America after all and by the Civil War, as French shows, their products— seeds, medicines, and foodstuffs—could be marketed with an aura of purity that the public sought, and the Shakers were on their way to becoming the pets of the American past.

What eventually brought me closer to understanding my own fascination with the Shaker aura was something that surprised me: the Metropolitan Museum of Art’s recent cinematic and costume interventions in the period rooms of the American Wing, particularly in the heretofore somnolent Shaker Retiring Room, a place I usually avoid. There, the inspired choice of director Choé Zhao (The Rider and Nomadland) to create a narrative has resulted in a miracle. (For a fuller account of the Met’s project, titled In America: A Lexicon of Fashion, see Eleanor Gustafson’s Endnotes in this issue.)

Shaker women retired to this room, based on one in Mount Lebanon, New York, for a half hour of silence before services. Zhao has left the furnishings alone and introduced the figure of Mother Ann Lee dressed in traditional Shaker garb, while the other figures wear sportswear created by designer Claire McCardell (1905–1958). (If you are dubious about this twentieth century incursion, it may help to have known someone born before 1930 for whom such clothes were as liberating as the moments of quiet must have been for the women of Mount Lebanon.) This tableau of repose, each figure mute, isolate, and calm allowed me to see the room for the first time, dramatizing its mystery and finally willing to leave that alone. Which is what the Shakers were after from the very beginning.