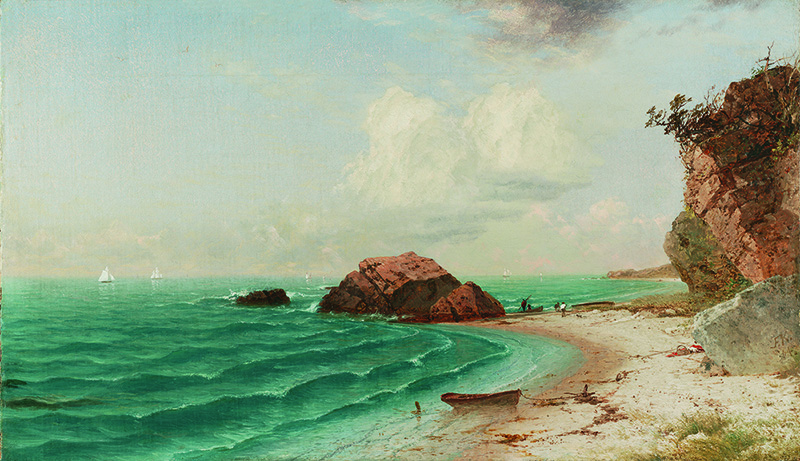 The enduring appeal of the paintings of the Hudson River school lies not only in the majesty of the landscapes that artists such as Albert Bierstadt, Sanford Robinson Gifford, and John Frederick Kensett captured on canvas but also in their variety—mountain ranges from the Catskills to the Rockies; virgin forests and wildflower-filled meadows; waterside scenes from the banks of the Delaware River to the Atlantic shores of New England.

Variety is also a keynote of a current exhibition of the work of Hudson River school masters, and some of their lesser-known contemporaries, at Questroyal Fine Art in New York. Ten Great American Painters and Their Brilliant Rivals features some 130 paintings by Bierstadt, Gifford, Kensett and peers such as Frederic Church, Thomas Moran, and Jasper Francis Cropsey. Alongside their paintings, the gallery is presenting works by underappreciated members of the school like Samuel Colman, Hermann Herzog, and Alexander Helwig Wyant. The show makes for a rare opportunity to appreciate so many and such a wide range of the art of this timeless genre in a single visit.

An auction encompassing 922 lots would surely exhaust the holdings of most estates, but not that of Mario Buatta. The interior decorator was a packrat of a tastemaker and whatever Sotheby’s did not dispose of in its two-day sale in late January—which garnered $7.6 million; two and a half times the pre-sale estimate—will be gaveled off starting this weekend in a series of auctions at Stair Galleries in Hudson, NY.

There was, indeed, plenty left over. Stair’s two-day The Collection of Mario Buatta sale gets underway on Friday, March 13th and encompasses 993 lots. The decorative arts on offer range in style from rococo and neoclassical to chinoiserie and regency, and include furniture, furnishings such as mirrors and lighting pieces, silver, tableware, porcelain, sundry accoutrements, and unclassifiable whatnots such as a trio of hand-painted pigskin-covered Chinese chests.

But wait, there’s more: two further Stair Galleries auctions from the decorator’s estate in April will focus on, respectively, on ceramics and “object, treasures, and trifles.” That’s a lotta Buatta to go around.

In the 1920s, as the world of design became enthralled with the Bauhaus and the notion of putting industrial means and methods in the service of the applied arts, Wharton Esherick (1887-1970) was charting his own maverick course in the design and making of furniture. Working in his home near Valley Forge in suburban Philadelphia, Esherick developed a unique approach to hand-built wooden furniture in a style that was all his own: angular, asymmetrical, and almost expressionistic, yet gently so. Esherick furniture is strikingly unusual, but at the same time warm and inviting. His work would be an inspiration for the designers of the post-war American studio craft movement, such as George Nakashima and Philip Lloyd Powell, working in nearby Bucks County.

As prolific as Esherick was, his designs are becoming rare in the marketplace. Freeman’s auction house in Philadelphia has an upcoming sale of commissioned Esherick work that should be of particular interest to collectors. In the late 1920s, as a way to pay for his daughter’s acting studies tuition, Esherick began creating furniture for the Hedgerow Theatre—an ensemble drama company founded in 1923 as part of the Rose Valley, PA, arts and crafts creative community. (For more on painstakingly made Rose Valley furniture, see our recent article here.)

As part of their March 31 design auction, Freeman’s is offering a set of eight “Hammer handle” chairs made for the theatre by Esherick using, in part, found hammer and ax handles, along with his “Thunder” table—fashioned to celebrate the troupe’s 1929 mounting of the play Thunder on the Left, in which the designer’s daughter had a star role. Associated lots include a “Sawbuck” dining table with X-shaped legs made for the theatre and a smaller trestle table by Esherick.

Auction sales of personal collections are almost always eye-opening events, particularly when the collector in question is a person of notable taste and discernment. Such is the case with the upcoming sale on March 31 at Treadway Gallery in Cincinnati from the holdings of June Greenwald and her husband, Larry.

June Greenwald is a longtime and respected art and antiques dealer from Cleveland, who is now retired (though her namesake shop continues under the direction of her son Ronald). Greenwald is known for her keen and wide-ranging eye, with work from the art nouveau and art deco periods a key area of expertise. Such perspicacity was brought to bear on two highlights of the auction: a pair of Tiffany lamps in including a rare “Peony” lamp that may well fetch $200,000. Other lots of interest include a Daum and Lalique and other art-glass vases and a lovely mother-and-child portrait by the English artists Arthur Elsley.