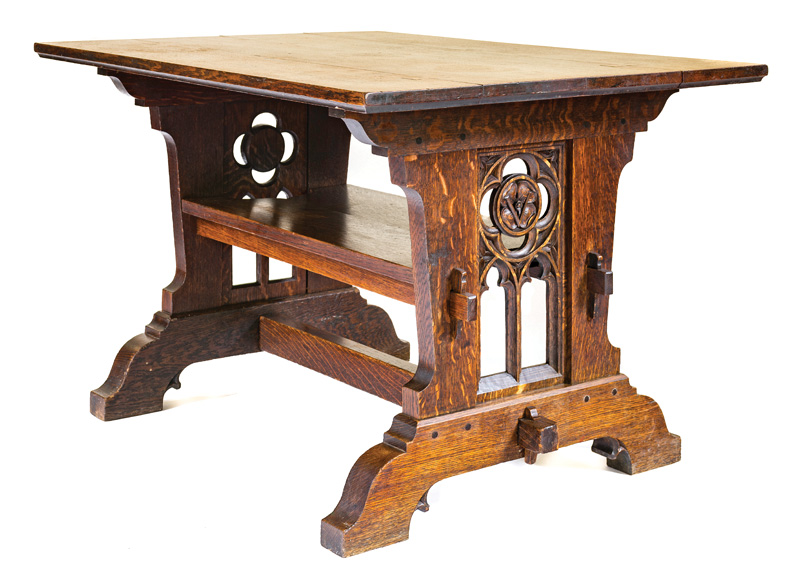 From 1901 to 1906, a small furniture shop in Rose Valley, Pennsylvania, produced a trickle of pieces that looked back, looked forward, and yet were entirely of their time. The workshop was part of an experiment by architect and visionary William Lightfoot Price. His aim was to establish a utopian arts and crafts community in the spirit of writer and thinker John Ruskin, where artists could put brush to canvas or chisel to wood away from the industrial smog of Philadelphia.

The furniture produced by the artisans in the Rose Valley workshop was arts and crafts in nature, but the gravity of the designs, the intricate carvings, and the deep coloring show a clear Gothic inspiration. This has led many to assume the pieces indicate a regressive historicism. Such a conclusion is understandable—after all, Price contemporaries such as GustavStickley, Elbert Hubbard, and others moved in a very different direction—but incorrect.

Where a Rose Valley table is rich in complexity and symbolism, a Stickley table was wrought with an absence of ornamentation, and many equate the latter’s simplicity of form with modernity. However, the plainness of the Stickley style was often driven by little more than the efficiency of scaling for mass production. In contrast, the demands of the market never determined the methods in the Rose Valley shops. This difference can be seen in their results: where Stickley and Roycroft produced many thousands of pieces, the total output of the Rose Valley shops over its five years of existence is estimated to have been a few hundred pieces.

Ryan Berley, the curator of the Rose Valley Museum at Thunderbird Lodge—a 1904 arts-and-crafts-style house with attached artists’ studios that was a centerpiece of the community Price founded—says that Rose Valley always “operated on its own terms.” Most pieces were individually commissioned and then made by hand with only the simplest tools. The artisans employed pegged joinery and used almost no glue. The firm did not produce a catalogue, had no set prices, and never prioritized output. Even their most common pieces, carved Gothic chairs, were rarely exactly alike. Berley believes he’s only ever seen two surviving sets of matching chairs.

As scholar Robert Edwards noted in his 2000 essay “When Next You Look at a Chair,” whereas the Stickleys, the Roycrofters, and most of the Grand Rapids factories used the jargon of the arts and crafts movement as a marketing tool, Price, in contrast, directed the Rose Valley shops to operate in full accordance with the genuinely radical and progressive concepts of the arts and crafts movement—in particular Ruskin’s belief that a just society was one that treated its workers well. Likewise, Price was an avid reader of Ruskin’s disciple William Morris. The color palette of the earliest Rose Valley buildings was even selected to match those in the fictional community in Morris’ 1890 novel News from Nowhere.

While this emphasis on strict philosophical doctrine was not conducive to profitability, the potency and vision that drove the community thrums through the pieces they built. Berley attributes this vitality to the degree of independence and creative control given to the craftsmen in the shops. The result is furniture of balance and elegance. Even for those who do not care for arts and crafts, the pieces possess an undeniable quality of what Berley calls simply  “good design.”

Employing only the best craftsmen and refusing to adopt any modern industrial manufacturing methods was the undoing of the Rose Valley endeavor. The costs of employing men like the exceptional woodcarver John Maene meant that any piece of Rose Valley furniture was practically unaffordable. The scarcity and exemplary craftsmanship of the pieces have led to high prices at auction; Berley estimates that a simple Gothic chair can cost $3,000 to $5,000, and more elaborately carved examples $7,000 to $10,000. A Rose Valley library table may sell for $10,000 to $20,000, and prices are rising. In 2012, a fine example sold to a private collector for a record $237,500 at Rago Auctions. (Berley cautions that at least two examples of forgeries have been found to date.)

Price once challenged his contemporaries to ask themselves “if they have anything to say, any new thought to thunder down the hollow vault of time.” It was through Rose Valley that Price raised his own voice. In that work, it thunders on.